The Bombay High Court last week suggested that the state and union governments reconsider procedures to inoculate the “floating population” of dishoused people with mental disabilities. Responding to a PIL it asked the state government and municipal corporation to consider marking them with a permanent tattoo to identify who has got the jab.

“The decision will exclude these people by labelling them. The Bombay HC’s decision is not suitable at all,” said Ashok Pandey, campaign coordinator at the Housing and Land Rights Network, an independent organisation that works to promote the right to adequate housing and land.

“It is not an attempt towards their betterment. Human rights cannot allow this. You have to cure the disease and not attack the victim,” Pandey told The Citizen.

During lockdowns the government has asked people to maintain distance and stay inside their homes. “But what about the people who do not have a home? The government had no policy for those people who sleep on footpaths without any walls around them,” he said.

An estimate from the harsh national lockdown last year found there are nearly 1.8 million dishoused Indians 40% of whom did not get any lockdown relief. Most are labourers earning a daily wage who are denied a livelihood during lockdowns, and do not have alternate sources of income, a bank account or savings.

Many of them also lack the forms of identification made necessary to get vaccinated, Pandey observed. Public shelter homes built by the government also lack the proper means to adapt to the Covid crisis.

However, according to Bipin Rai, an official in the Delhi government’s Urban Shelter Improvement Board, it was only initially that the government process required people to get registered on CoWin and link their mobile numbers and Aadhar cards.

Now a dishoused person without documents can also get vaccinated, and the government has set up special camps to vaccinate more dishoused and undocumented citizens, said Rai.

Some believe that vaccinating people without identification poses its own problems. “The government will not be able to track these people. It is the state’s failure that we have not been able to identify these people, and some authority should be responsible for this,” said Sunil Kumar Aledia of the Delhi-based Centre for Holistic Development.

“India’s homeless are the individuals who beautify our cities, including construction workers, rickshaw pullers and cleaners. They sleep under the open sky, on roads and train tracks, breathe pollution and don’t even have clean water to drink,” Pandey pointed out.

“These people are not voters. This is why the government doesn’t care. Even those who have voter IDs have ‘homeless’ written on their cards. Shelter homes should be put in place by the government with adequate infrastructure and facilities for sanitation, entertainment and a dignified life,” he said.

The Delhi government’s Shelter Board website claims there are 150 night shelters or ‘rain baseras’ in the national capital. According to Bipin Rai, the state government has been providing lunch and dinner at these homes since March last year.

“We have also started sanitation drives, testing facilities, isolation wards, and trained caretakers on social distancing norms,” he claimed. “COVID has not widely spread in shelter homes because most labourers who live in shelter homes have strong immune systems because they are hardworking,” he added.

The actual management of these homes is delegated to various NGOs. One such organisation, Janpahal, which runs 29 shelter homes in east and north Delhi, hasn’t received any payment since March 2020 for the food they have been providing to the residents.

“They are playing between files and we are feeding people out of our pocket,” said a representative. “The government has to reimburse us for food and electricity, that payment never came. All NGOs cannot bear this financial burden and are in a state of collapse.”

According to Janpahal, who has been working with shelter homes for the past 10 years, these homes are not equipped for people to live there all day. “The design of these shelter homes are not built for the summer. It’s like living in an oven. The coolers and fans are 10 years old with no maintenance,” the representative said.

The organisation also manages two of the isolation centres built for dishoused Covid patients. “But there are not enough. There need to be more centres if we want to handle the situation of Covid,” the representative said.

Sunil Kumar Aledia said the homes in Delhi have a problem of overcrowding. “No social distancing has been maintained in these shelter homes. These homes were not ready for the second wave and are definitely not ready for the third wave… There have been various casualties in shelter homes that have just not been reported,” he said.

Ashray Adhikar Abhiyan, another NGO working with 12 shelter homes across Delhi to provide Covid relief, has set up isolation centres at four of these, according to member Parmjit Kaur.

“We have been distributing food to over 200 people every day because no government ration scheme has been able to reach those homeless people who don’t have an ID card, which comprises the majority of the population,” said Kaur. 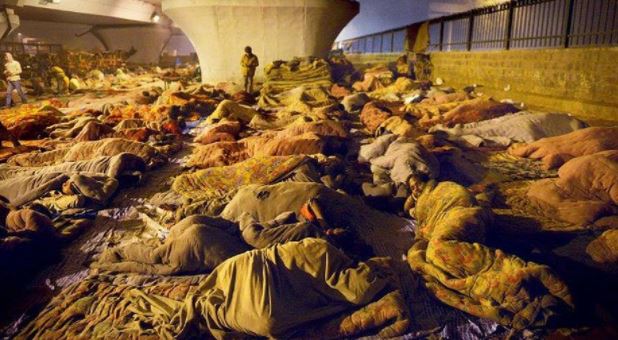