Online Isolation Proves Difficult for Kids with Special Needs, and their Parents

A halt on learning and early identification

Keerthana, a mother to a young girl with autism spectrum disorder, was shattered when the nationwide lockdown was announced.

“I was a mother with a recently diagnosed child on the spectrum, with the whole Internet screaming back at me saying early intervention is key. A time bomb started ticking in my head and it just made things worse,” she shares.

Keerthana’s daughter Vaanya was then barely three years old, having started therapy just a couple of weeks before. Both the young child and the young mother found themselves lost in the online world.

With school shifting online, her parents decided to try teletherapy.

“For the children on the autism spectrum, communication is their core deficit. To look at people and listen to them at the same time is tough. To listen and be able to make sense out of it is more tough. To agree, comply and then respond is a whole lot more tougher.

“Now imagine the same with a human being miles away, trying to talk to the child through the screen,” she tells The Citizen.

After six to seven months and huge amount of fees, the parents decided to quit teletherapy. And a sense of having failed at parenting hit Keerthana hard.

“You know how we feel during our first swimming lesson. Where they just push you inside the water when you have absolutely no clue how to make your way up again. I felt the exact same for a long time,” she confided.

Amal Kiran, founder-CEO of Daffodil Health, a platform for families of children with special needs, acknowledges the gaps in online learning.

“A lot of learning for children, including children with special needs, happens through interactions with others. In some cases skill development has been affected. We have seen regression in skills - some children who had developed some skills have now regressed, some verbal children have become non-verbal,” he agreed.

“But some children are showing progress as well, as they are learning from a place of comfort.”

As the pandemic continues to disrupt people’s lives, one of the most affected groups are young children, who still do not understand the virus and why has it turned their world upside down.

Children with special needs have been perhaps hardest hit. The last census registered 79 lakh children with disability in India, or nearly 1 in 50 children.

For Keerthana and Vaanya, things took a turn for the better when the harsh lockdown was lifted, and the young one was able to attend physical therapy sessions.

“Six months post-therapy there was a humongous change in my daughter, and her responses became better and her first words came out,” says Keerthana.

When the second wave hit, Vaanya was better prepared, having had time in physical therapy sessions. Emulating the online therapist, her mother became her coach.

“The entire spectrum of education has been affected,” says clinical psychologist Meghana Hegde. “Children, especially children with special needs, have lost sensory and perception place to learn. They have to touch, feel and play, all of which has been affected.

“They have to sit in a room in front of their laptop. This way their creativity is also being curtailed.”

Yet Dr Hegde sees a silver lining. “There has been a positive impact too: people have learnt to embrace technology, parents and children bonding has also improved. Parents are getting more involved. Earlier our approach used to be child focused, now it is family focused.”

Besides parents, special educators too have had to rethink and relearn for the transition online.

Kritika Dogra, a special needs educator, says the transition to the online world was hard for both her students and herself.

“In offline one-on-one sessions, the number of concepts to be learnt were limitless. The child used to get the VAKT experience (visual, auditory, kinesthetic and tactile) and it was easier to learn and memorise.

“Although I still try my best to make our class as interactive and fun as I can, it still can't beat the process of learning offline,” she says.

Dogra explains that for children with special needs, like autism or ADHD, coping with even the slightest change is hard, and to understand why the world suddenly switched online, and why they need to attend classes on their laptops or phones, is even harder.

Madhav, 11, who is on the autism spectrum, was used to a structure that involved physical therapies, activities, going to school, interacting with people. The pandemic halted all the activities that could put his mind at ease.

“Being on a spectrum, Madhav has had issues with eye contact, and here you are made to sit and look into a screen with multiple windows, and have to concentrate on music, on the video, what the teacher is saying - it was all very overwhelming.

Now Madhav’s homeschooling journey, which started this July, has become a balancing act for him and his mother. Besides basic education she has incorporated independent and interpersonal skills.

“The other day I took him to a date lunch. These are the skills he should have: to be able to go to a restaurant, a mall, or an office or bank. My curriculum for him includes sports, independent skills and functional academics,” shares Kalra.

“This pandemic taught me that not every child is the same. Your child might love school, but mine hates it!”

Pandemic mismanagement has also halted the process of early identification.

According to Unicef, early identification is important to “facilitate timely access to services to support the development of children at significant risk for developmental delays, and to prevent potential issues, such as a loss of confidence in parenting skills.”

Santhi Karamcheti, co-founder of the Eka Educational and Charitable Trust, a training school for children with special needs, agrees.

“Early identification is important. A lot of diagnostic processes are halted as they cannot be converted online. Without a diagnosis, we cannot issue identification or disability cards. They are important for children with special needs who come from underprivileged societies, and need those cards to avail subsidies and grants.”

Some are trying to work their way around these constraints. Dr Meghana Hegde says there has been a paradigm shift in the way diagnosis is done online.

“It is indeed difficult to diagnose without a physical evaluation, which usually takes 4-5 sittings. However, we are moving towards a milestone based curriculum.

“Instead of giving labels of autism, ADHD, we tell parents that at the age of 15 months a child should start walking - if your child is not, let us start some therapy.

“This helps parents accept better, too.” 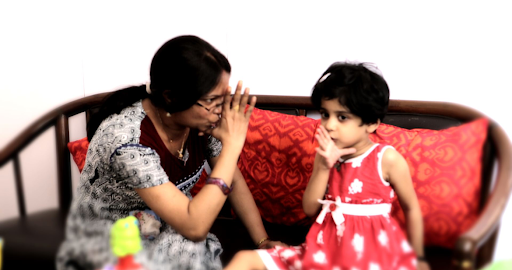