Hazarika’s impressive 2015 debut feature, ‘Kothanodi’ turned to events and characters from Assamese folk tales, and re-imagined them as a narrative. In his second film, he takes a quantum leap into looking at urban contemporary life. He tinctures both with the same eye for human beings’ unstoppable urges that lead to extreme absurdity and self-destruction.

The director’s work looks at life and its emotional challenges with a kind of eerie other-worldliness. It studies retribution of the kind that is meted out in fables and parables, which then invades us humans in our everyday lives. In his words, “The more you try to repress something, the more you encourage it to express itself in other ways.” With that, fate evolves a chain of its own that aims at fair play, but marked with its own larger-than-life strictures.

His second film, ‘Aamis’ is a fearsome parable on what a couple can do to nurture their love when subjected to society’s castigating vigilance. The love in this case is illicit. The film does not look at physical intimacy in the way it is normally presented. It sees taste between the lovers as something that feeds and satiates their sexual appetite. The director seems to be saying that the more you place hurdles between a couple’s love and desires, the more inventive, weird and horrific are the ways that can evolve to replace their innate needs.

The plotline is in tune with life as we know it, where, in general, relationships outside of marriage are looked at as sinful and deserving of castigation. The film follows Nirmali, a married paediatrician in her late 30s, who leads a mundane domestic existence in Guwahati, Assam. Her husband, a senior medical doctor, spends most of his time out on relief work in surrounding areas. She is left alone at home to take care of their son. One day, she meets Suman, a young PhD student researching food habits in North-Eastern India, who warms to her in a manner she seems unaccustomed to.

Suman's work tends towards his believing that all manner of food is acceptable — nothing should be deemed abnormal. Nirmali too is drawn to this idea. They soon discover their shared love for eating, specifically, meat. Although Suman longs for some sort of physical contact, on their socially enforced platonic dates, they bond over meals comprising of unusual meats. As Nirmali's taste-buds grow more adventurous, their relationship takes a dark and bizarre turn.

Increasingly drawn to each other, Suman tempts Nirmali with more and more exotic dishes as a way of expressing his desire for her without committing adultery. Ultimately, Suman's passion leads him to break a taboo from which neither can turn back. Cannibalism of each other seems to be the only solution to their all-consuming love.

In its bare bones (pardon the pun), ‘Aamis’ is ostensibly about the repercussions of repression, which, in this case, ensues from the couple’s love being taboo in conventional terms. She is married and he is a young bachelor. The film, says the director, is about having empathy for sinners, because to sin is human. It can also be seen as a study of two suppressed lovers who must find a novel way to express their forbidden feelings. The film starts with a simple enough plotline which gets increasingly smudged and dark as their relationship develops.

Hazarika says, “A big part of the forbidden aspect of the romance is due to the female lead, played by a wonderful Lima Das, who in the film is married and resorts to a kind of emotional infidelity, which isn't explored much in Indian cinema”. Satyajit Ray touched on it discreetly in ‘Charulata’, when the wife finds herself inconsolable at the impending departure of the young man she is so deeply drawn to. In Ray’s finely tuned ending, the husband holds his hand out to his emotionally disturbed wife, asking her to believe in him and their relationship, despite her confused state of mind and a doomed love for another man.

‘Aamis’s’ somewhat trenchant plea for justice for human desire seems bizarre. But, it is in tune with life’s severe contradictions: history and life is littered with such doomed stories of passion and the tragedy they entail. The film is dark and visceral as it looks at the constraints of sexuality and how transgressing its norms can have a monumental impact all round. ‘Aamis’ works on the viewer as an increasingly discomfiting parable, with an innate wisdom that life’s stark and stringent code of behaviour is far too exacting for human desire, which if forbidden, gets replaced in an unnatural way. The same applies to suppression in other walks of life, where freedom is curtailed. This is both a personal and political statement. It can be seen as a strong comment, and even a warning, on the way a country moves forward. 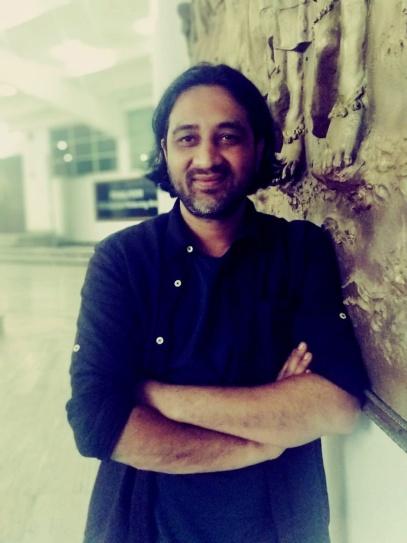 Bhaskar Hazarika is among the foremost filmmakers today’s India. Born in Dergaon, Assam, he graduated in History from St. Stephen’s College, Delhi, and completed his Masters in Film & Drama from the University of Reading, England. He has worked extensively in Indian film and television, writing for both.

His debut feature ‘Kothanodi’ received the Asian Cinema Fund’s Post Production Award, the first Assamese film to be selected for the prestigious grant from Busan. It offered the film the opportunity to complete its post-production in Korea, and then hold its world premiere at the Busan International Film Festival, travelling widely thereafter. His second, ‘Aamis’, will follow a similar trail post its opening at Tribeca. His work is sought after at festivals at home and has a major following abroad as well.

With no Indian film at Cannes this year, we need filmmakers of Hazarika’s calibre, and all the support filmmakers like him can get to nurture their cinematic talent at home and abroad.