“The quarantine is overwhelming… it is difficult to feel any inspiration.”

NEW DELHI: With the uncertain and unexpected outbreak of COVID-19, life has slowed down for a while. It’s difficult to get used to the “new normal'' as it is unchartered territory. From illustrators and musicians to comic artists and content creators, everyone is looking for new ways to channel creativity in these despondent and uncertain times.

Artists are trying to come up with new and riveting content. We have seen an outpour of ‘quarantine art’, but little has been said on the challenges artists and creators are facing in lockdown.

“The quarantine is overwhelming, there are so many things going in the world right now. It’s difficult for me to feel any inspiration and everything feels very bleak and hopeless,'' says Rachita Taneja, a Delhi based comic artist and human rights activist. ''I’m used to working from home but I would love to have the choice to go outside and work alongside my friends who are also freelancers,” Taneja tells The Citizen.

“The outbreak was staggering for everyone. I feel privileged that I could come back home from Boston because there I wouldn't have [access to] health resources at the end of the day but that also meant saying bye to all the resources art school gave me,'' says Siddhant Talwar, an independent artist/designer/organizer who is also a student at School of Museum and Fine Arts, Boston.

Siddhi Surte, a Mumbai based illustrator/visual designer says, “it was a little difficult to keep myself motivated in the first month because a lot of companies had to shut down, a lot of the ongoing commission projects also started falling through. It was a little demotivating in the beginning so to overcome that I’ve started giving myself some personal projects. I’m rebuilding my website. I’m trying to treat this like a forced summer vacation.’’

‘’A lot has - both personally and professionally - changed because of the pandemic. However, I'm extremely grateful to have a full-time job at the moment. That being said, I think the creative industry and gig economy is taking a massive, massive hit right now. Personally, I had trips and other ambitions that required physical movement cancelled and/or derailed. I'm someone who tries to plan every aspect of my life, out of which some plans are slowly plotted out over years, so this really does throw me out of sorts a little. But at the end of the day, it could be a whole lot worse,’’ says Veer Misra, a Delhi based illustrator. His work explores mental health, love and intimacy, and queer experiences. 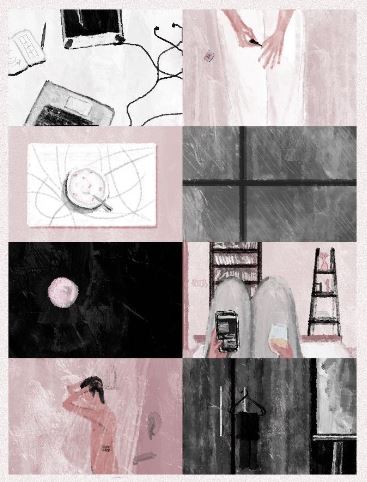 The quarantine is almost debilitating. The shutdown of many creative spaces and companies is a big blow to the design and culture industries as a whole, which will take years to recover. A lot of work-related tours and commissions are cancelled and it’s affecting freelance artists and their work.

Taneja says ''I was supposed to go for a conference in Sri Lanka on how we can get South Asian artists to fight propaganda in South Asia. That got cancelled so that is something in particular that I feel sad about. I have a gig and they have cut it down by 50% which means a lot of my paid work is affected.''

Work that was already commissioned but not yet paid for has become another bone of contention in quarantine, as payments are not coming in.

‘’The biggest problem is in getting in touch with the commissions that got stopped halfway through. You get ghosted a lot by a lot of people you’re working with, there’s a whole communication gap. There are a lot of grey areas like you don’t know what will happen next, you don’t know if once this ends artists are going to be able to pitch in for more projects, will they get the same pricing as I could quote before the quarantine, there’s that whole level of uncertainty,’’ Surte explains.

"There’s so much happening. I was also questioning what kind of art do we need right now? A lot of critique of the state will go shush right now because there are other things to focus on. We still need to critique the state because the state hasn’t stopped. Activists are being jailed right now, trans people are not being helped, migrant workers are going through so much. There’s so much happening but State isn’t doing much. As an artist, we need to constantly critique the state while also elevating voices," Talwar adds. 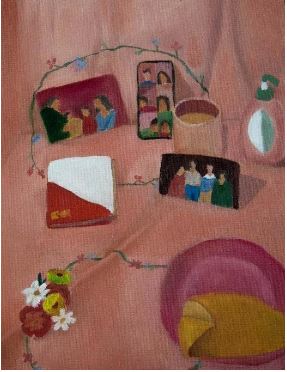 ‘’It's both terrifying and comforting. It's terrifying because you don't know when you'll get freelance work again, or rather how much it will pay with budgets decreasing everywhere. But at the same time, art is comforting for me because it allows me to both run away from my feelings as well as address them, depending on the day as well as on the piece,” Talwar concludes.

‘’As far as my art is concerned, I fear it's blurring into each other, much like my work and home spaces have. My biggest issue right now is not being able to separate the different parts of my life that I'm used to keeping far from each other and how that's impacting my inspiration, process and as a result, my work’’ Misra adds.

One of the major problems faced by artists is to come up with different ideas in the lockdown. A global pandemic has not only jeopardized our economy but has also driven us into an unanticipated quarantine, rupturing the very structure of our daily routines that helped most artists come up with new ideas, leaving them with monotonous - almost uninspiring - routines.

''In this quarantine, what I’m creating is more of what I could see. I rediscovered cooking, a lot of people liked it so I started making these illustrative recipes as content because it was a fun challenge for me too. My husband and I are working on comic strips, he writes and I draw,’’ says Surte.

“I realized that I had to pivot towards materials that I can make at home. My art practice cannot be stopped because of machinery or tools. I have to adapt. I pivoted towards paintings and collages and I’ve started making tape transfers. I’m going through a lot of old newspapers and using what they’re saying to subvert it to actually take out the truth,” Talwar says.

“In a way, I'm letting the pandemic and being at home inform my ideas. One project I was happy with in particular was an illustration centric fundraiser I did for queer people impacted by Covid-19. But otherwise, I'm exploring ideas like loneliness, mental health, and how we consume time, which while always relevant are maybe more so now than ever before,’’ Misra tells The Citizen.