NEW DELHI: ‘Queer Art’, a term often used to describe art that depicts the LGBTQIA community has been sporadically embraced by society, yet has faced a resistance of shame. While their work touches upon concepts of inclusivity, body positivity, mental health and gender-based discrimination, artists explain that some continue to consider such art as “pornographic”, “mature art” or even “non-art” .

The exploration of the fluidity of sexuality and desires of the community—the portrayal of which challenges accepted standards of morality and decency in heteronormative society—has been deemed by some as “vulgar” and “obscene”.

Artists told The Citizen that they have often faced difficulties in attempting to find traditional art spaces willing to represent them.

“I went to the India Habitat Centre and a gallery in Connaught Place to ask for permission to display my art but they refused to hang my paintings saying that they can’t promote ‘such things’ and will allow me to work if I have something better to offer,” said Aamir Rabbani, 28, a painter and a migrant from Bihar.

Photographer Pulkit Mogha, 26, expressed deep distress, stating, “There has been no support or spaces that have treated me well. I have always been asked to ‘tone down’ my work if I want representation. I just wish there were a space that would pick my work and present my ideas as they are.”

Baishali Chetia, a 37-year-old illustrator recalled a curator having second thoughts, fearing the “bold nature” of Baishali’s work would bring in conservative forces “to vandalise the show”. “They finally gathered the courage to show it anyway, but it was deliberately hung in a corner of the gallery a little inconspicuous from the rest,” Chetia told The Citizen.

Illustrator and activist Kokila Bhattacharya highlighted another such incident. “When we were talking about trans rights in Bhopal, I reached out to a lot of local galleries but they shut us down because they couldn’t differentiate between sex, gender and sexuality and they didn’t know what we were talking about and its all very blasphemous for them and hurts religious sentiments,” Bhattacharya said. 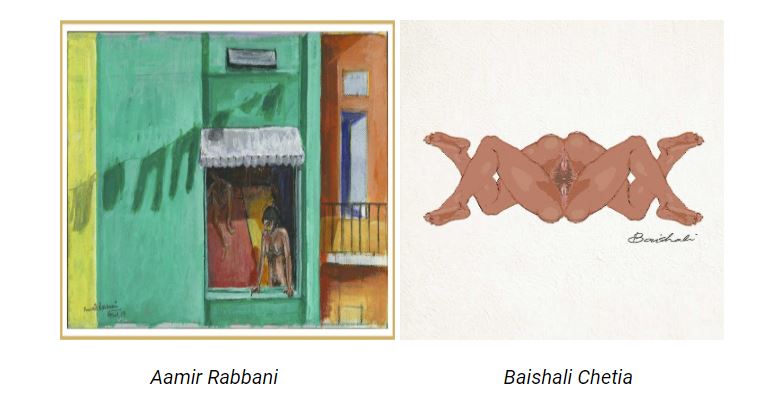 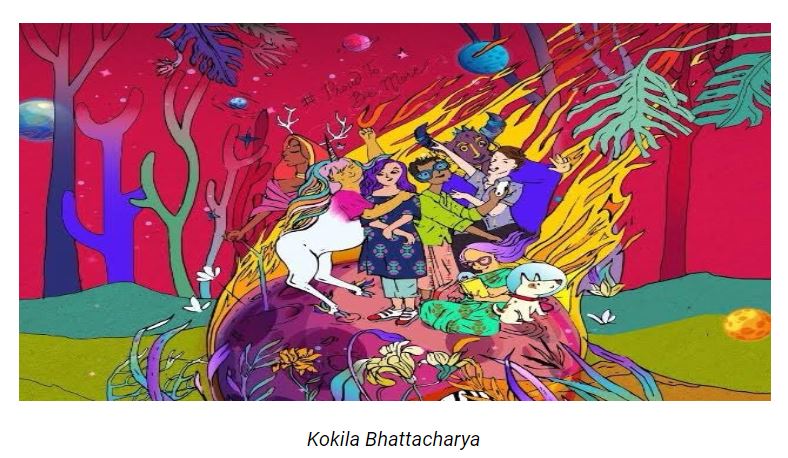 In response to such rejections and in solidarity with each other, artists have stopped waiting for traditional spaces to embrace them and have carved their own niche by self publishing on Instagram and/or websites. They have also collaborated on several occasions with liberal artists and curators in exhibitions that are specifically held for promoting their art.

While relatively safer spaces exist for the artists online, in the form of exclusive groups, many also complain of internal politics within such platforms. An artist requesting to maintain anonymity alleged that these spaces tend to promote only certain artists and opportunities are given to them over everybody else.

“I personally don’t want to be in a traditional gallery space as it often doesn’t allow for a lot of conversations to happen that are a little different or slightly away from what is conventional,” said artist Arunima Bose. “Spaces will be curated in a better way that is more egalitarian, more inclusive, when curators are coming from an open bent of mind.”

While they continue to face discrimination from art galleries because of how ‘scandalous’ their work is deemed to be, artists do find space in the media. However, as 23-year-old visual artist Veer Misra stated, “There is definitely a lot of pandering into a very heteronormative art state and everything has to be made palatable for the non-queer people.”

“The art that they publish of queer people is something that fits more into their narrative which is not wrong because it is still my art and I am proud of it. However, I have noticed that a few publications would choose the most palatable art that they can find,” Misra said.

Mogha told The Citizen that he had been advised by many to collaborate with magazines that regularly feature artists, “which can also be their way of taking high-ground, not understanding how nuanced the representation of sexuality is so often you end up compromising with yourself and your work.”

“I did one such collaboration after which I quickly realised that these aren’t going to work. Our features are controversy pieces for them,” he said.

“Of course there is more representation than what was before but considering that there are so many of us and there are so many stories to tell with this rampant queerphobia everywhere, we need to spread awareness,” she said, adding that “the right kind of inclusivity” in mainstream media would help make a difference. 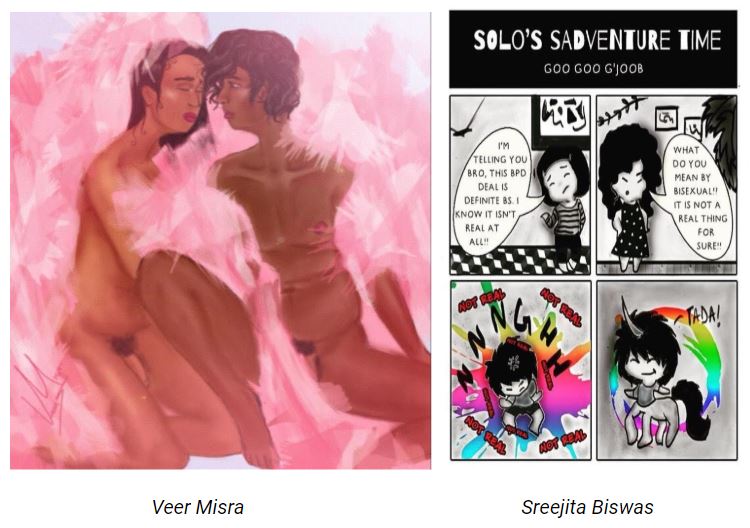 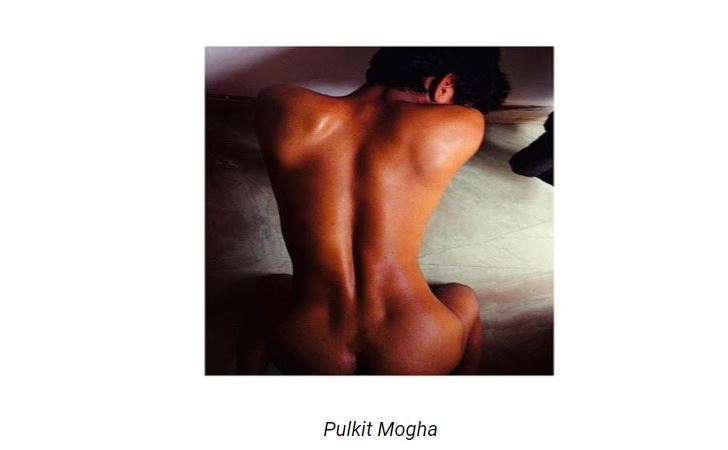 Artists have time and again raised their voices to emphasise that their work is not something to be tweaked at the whims and fancies of editors and curators.

“The platform Instagram has deleted many of my pictures because I didn’t know about self-censorship as I follow the idea that however you feel, you should express yourself and my thought is to disturb the senses,” said 26-year-old photographer Raqeeb Raza.

“Censorship or bias has been clearer and more visible to me on social media,” artist Janine Shroff told The Citizen. “Most tech companies and social media companies are peopled by largely straight, white, cisgendered men and the guidelines and how they are enforced reflect that. Anything they perceive to deviate from what they believe is the ‘norm’ may be flagged.”

“LGBTIQ events, adverts and art are certainly more heavily censored or shadow banned or hidden from certain demographics,” she said. Shroff added that she used to post a weekly ‘Vagina Monday’ artwork to share vulva art and got regularly flagged for that even though it was “strictly never pornographic”.

Filmmaker/illustrator Anirban Ghosh said he had made a feature length documentary on the lives of seven individuals with trans identities in and around Kolkata—characters included “a sex worker, hijra, somebody working in an electronic showroom”. The film captured tales of love, violence and social acceptance.

“I went to a so-called progressive space in Calcutta to do a screening and they rejected the film saying that it was too controversial and they were particularly bothered about the language that the characters were using and their way of talking,” Ghosh recalled.

The battle with censorship—rules of which seem to be narrated by individual bias rather than organisational guidelines—is considered by some as an attempt to curb creativity. 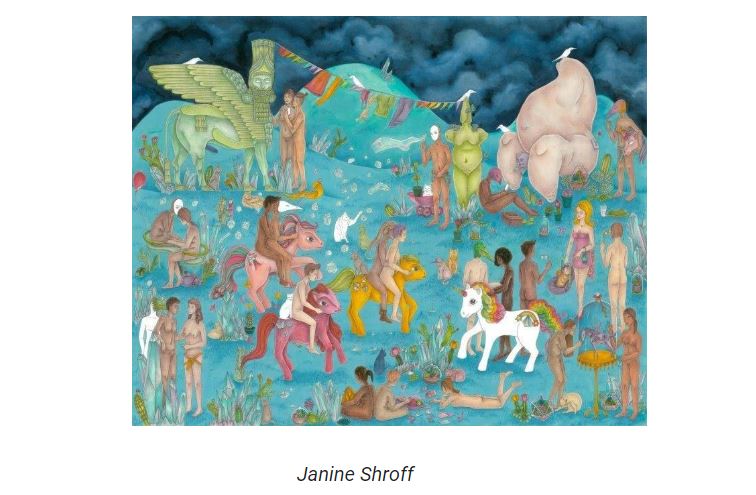 Artists who have faced multiple rejections of their work stated that they are often not given a clear reason substantiating the rejection. Harmeet Rahal, 24, an illustrator said, “I have sent out my work and I have faced rejections but we really don’t know what the reason was... These things are of a more covert nature.”

Meanwhile, Surya Shekhar Biswas, a graphic designer, highlighted concerns regarding privilege in the community. “Coming from a privileged background where your parent is an artist or author or being a product of an art school establishes an artist sooner and sort of takes away from their art and focuses more on their popularity.”

Artists tend to make holes in their pockets trying to put up an exhibition—handling display, transportation to the venue—all while not earning any profit. Several artists also exhibit their work in collaboration with others. This too, is reportedly either self-funded or crowd-funded. There are freelance projects or commissioned works that do pay, though not enough to allow art to be the only profession. Publication giants believe that if they are publishing someone’s art, it should be free of cost as they are providing them with “representation”.

Flagging the issue, Sonaksha Iyengar said, “In South Asia, specifically India, paying artists fairly is often ignored. For instance the brands, organisations who reach out to these artists to make work for them have an expectation that their art should be free.”

“If a brand asks an artist to make an illustration then pay them for it or if you ask them to share their story, pay them for it. It is also labour and it deserves to be compensated for,” she stated. 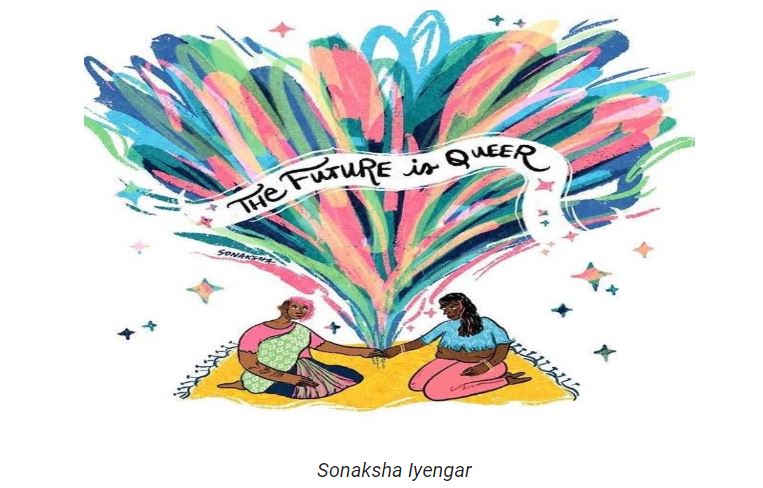 “The way we tend to represent bodies in the Indian art and design space today is often whitewashed, and that is something I have always tried to challenge with the kind of body types, complexions, and gender presentations I represent in my work, and which is immediately branded ‘too queer’,” said Anshumaan Sathe.

Senior and renowned artist, Balbir Krishan, 43, narrated how his life has been a struggle. Hailing from a small conservative village in Uttar Pradesh, Krishan lost his legs from the knee below in a train accident. Post the accident, for three years, he faced discrimination at the hands of galleries and curators in New Delhi and also had an exhibition vandalised in Hyderabad, all because of what his art depicted—male nudes, his journey of self exploration.

He didn’t stop or even consider the option of settling for something he wasn’t comfortable with and eventually gained massive recognition. But, he said, “Selling this work is always challenging. There still are times when I don’t sell a painting for six or eight months.” 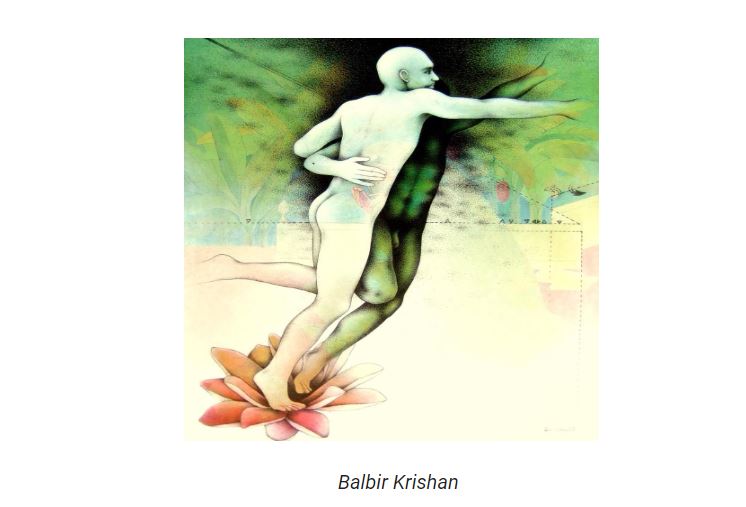 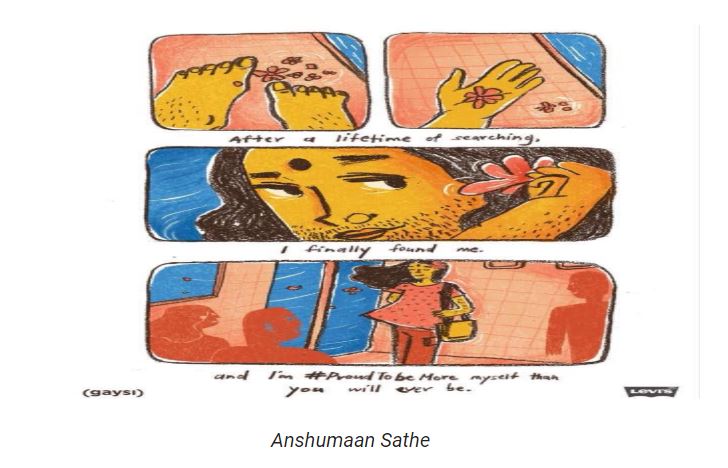 Not all artists have seen hardships of this nature; quite a few have been fortunate in getting the right support and recognition.

While the art itself is an expression of one’s lived experiences, is it the box of labels in which we place this art—as if it needs an identity to be comprehended—that has led to people’s hesitation?

Sreyansi Singh is a journalist narrating stories about fashion, voices and lives.