Zameer Sheikh, Artist from Baramulla, Says He Works With History

So that someone, on the shores, waits'

“Art is the lie that enables us to realise the truth,” wrote Pablo Picasso. Likewise, war always has a deep and lasting impact on either side, but it also lets an artist uncover the crisis and present it as a rumble of big, unanswered questions.

One such artist is Zameer Ahmad Sheikh, who lives in the Old Town area of Baramulla, north Kashmir, an area famous for the lush green mountains through which the river Jhelum runs, near the Line of Control.

Sheikh, 40, started pouring out memories on the blank canvas back in his school days. He was 28 when tragedy struck the family: his father died after being hit by bullets in crossfire outside their home.

Hameed Ahmad Sheikh was a renowned artist from Baramulla, and was killed by crossfire on 9 July 1992, while on his way home with Zameer near the banks of the Jhelum.

“This river holds the capacity to wring one’s heart. Over the years, people and the river have witnessed an emotional churn. The river has seen all the bloodshed, the hopelessness and the nitty-gritty of events that have taken place over the last few decades,” says Zameer.

His late father used to work at the Uri Civil Project, a power project in north Kashmir that generates electricity for the whole erstwhile state. For more than a decade, Zameer Sheikh worked there himself.

The family took a great while to recover from the shock of the death. Incredible in a way, the incident paved the way for Sheikh to channel his approach to colours. One of his works, a man carrying a little boy on his shoulders, exhibits an autobiographical account of the days he spent with his father.

Another one of his creations is linked to exiled Kashmiri-American poet Agha Shahid Ali’s imagination: a shikara wala sits in his shikara with no tourists to take around.

Ali once said: “So that someone, on the shores, waits… I see the long wait, from sunrise to sunset, of the ‘shikara walas’, who return home disappointed every day as there are no tourists to take around or sell bouquets to. The shikaras parked on the shores of Dal Lake seem to suggest a cruel irony of some calm in a world that has long been burning.”

“Kashmir has produced artists with the wildest dreams,” Sheikh remarks, “from poets like Agha Shahid Ali, Habba Khatoon to young singer–songwriters like Yawar Abdal, Alif Saffudin and Mohammad Muneem. They all serve as a source of inspiration to the youth.”

Zameer Sheikh says he works with history. “I make an effort to showcase history in the form of paintings, so that our generation gets a fair glimpse of events that shaped Kashmir. Scathing criticism awaits the artists whose canvas is ruled by little instruments of violence.”

“As an artist, when you look around for inspiration, this otherwise–‘Heaven on Earth’ provides traces of violence as muse, everywhere.” 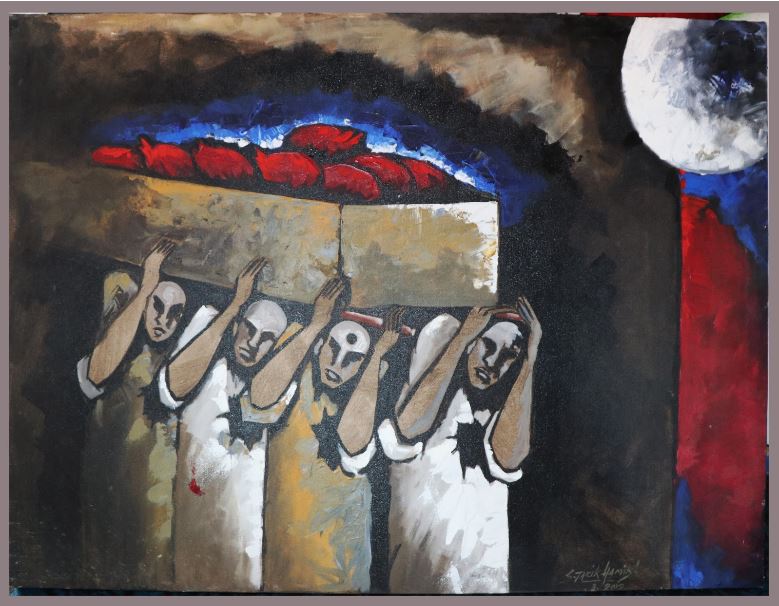 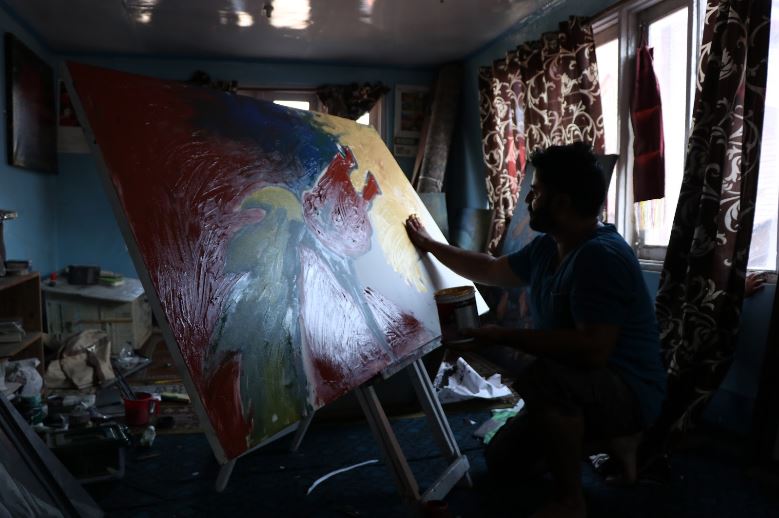