Not afraid of challenges

Art of resistance has undergone a complete transformation in the digital era. Without having to wait for that once in a lifetime exhibition, artists now have an open and free space where they can showcase their works. With the threat of censorship out of the way and the provision to remain anonymous, more and more artists are now beginning to assert their voices.

The result is the powerful ensemble of digital art that has taken the Internet by a storm. From challenging the deep-rooted conventions of patriarchy or caste discrimination to bravely critiquing the government, the present political-digital art in India is a sight to behold.


To understand what goes behind making the artwork that hits the sweet spot every time, The Citizen spoke to a few digital artists who are at the frontline of this scene.

For the female artists; the personal is political.

Within a couple of days after the release of the controversial and highly debated Netflix show, The Indian Matchmaking, social media was flooded with art that celebrated the presence of brown-skinned and curvy women. This came as a response to the show’s repetitive demands for “fair and slim bride”. 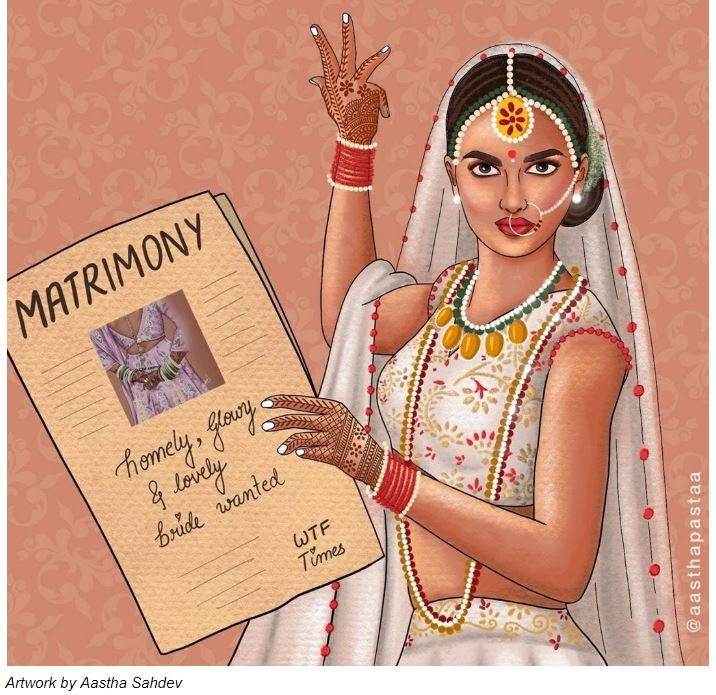 The Netflix show is one of the many examples of the idea of beauty that is placed upon women. Mainstream art has a major role to play for this idea to sit deep in everyone’s head.

Turning away from the male gaze, female artists are using the digital platform to tell their own stories through art. Aditi Baid, an up and upcoming digital artist, remembers how it felt to look at art that doesn’t resonate with her lived experience. An experience that is painted by her gender, that continues to get sidelined.

So, in a bid to channelize her inner frustration, she uses her own experiences, ranging from sexist office jokes to gender division at home as an inspiration for her art. For her, artistic expression helps her process her emotions better. 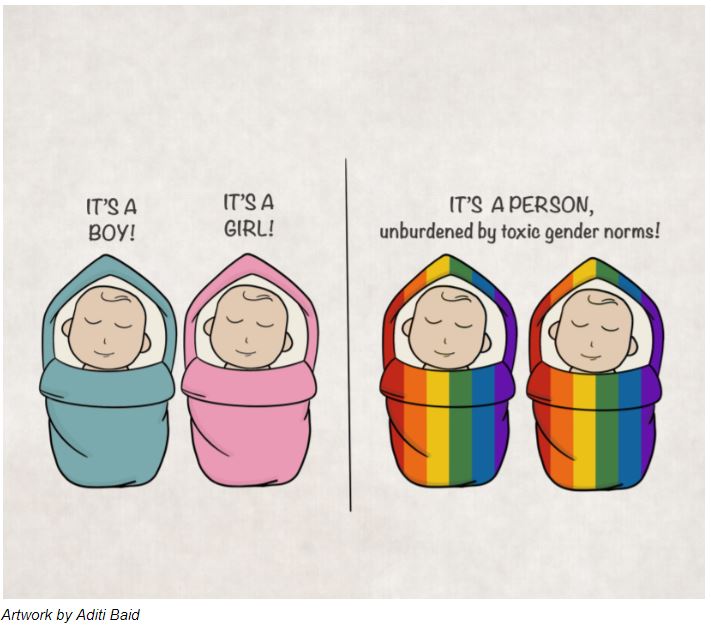 Vidushi Yadav, a young female artist, on the other hand, looks at her art as a means to represent all those people who are made invisible by society. According to her, dark-skinned women, plus size women, trans folks, gender-fluid folks are regular people who are around us but we have learned to not see them.

“I am a brown-skinned woman with body hair, acne and burn scars, I feel I am worthy of everything that popular media told me I am not. I draw me in all the women I draw. I don’t want another generation of women to grow up with these archaic ideas,” she says.


For other female artists, channelizing this lived experience is a crucial yet painstaking task. A lot of Sangeetha Alwar’s artwork sheds light on sexual harassment, which is often based on her own experience.

“To make art on sexual harassment is to live the experience again. It is intense and it takes a lot of time. While uploading it, my anxiety is at an all-time high, but I know this is what I have to do to make sense of the experience,” she says.

Any expression of your experience is art, says Siddhesh Gautam, a popular digital artist who weaves anti-caste sentiments in his works. Gautam, who is currently working on a graphic novel based on Ambedkar’s Annihilation of Caste, “came out” as a Dalit to his college friends and was shocked to see their reactions. This encouraged him to join the anti-caste movement and make art that resonated with people who might have faced similar or worse experiences. 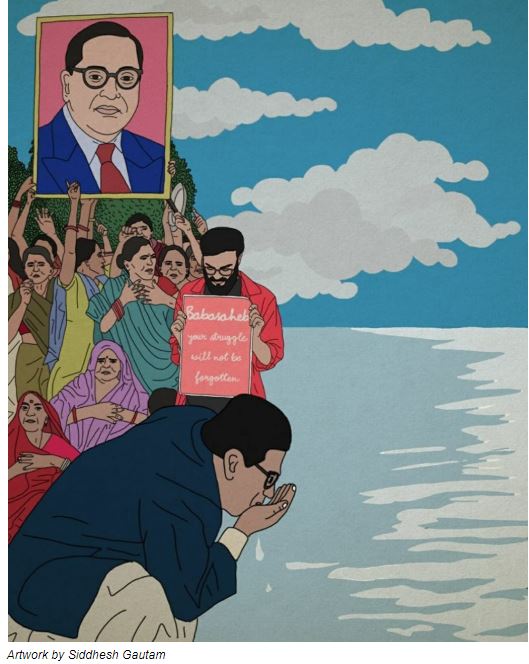 Anti-caste art sheds light on the individual and community-based experiences of being a Dalit in India, while simultaneously questioning the hierarchy, power struggles, and the continued dominance by the upper castes.

“My art is borne out of my historical subjectivity rooted in collective experiences of rejections and humiliations. It represents an expression of caste oppression, of denial, of human dignity and (the one that) demand(s) self-respect.”

Dr Sunil Abhiman Awachar’s answer to what his art means to him highlights the roots and importance of anti-caste art. A Dalit rights activist, Dr Awachar, has experienced a deep-rooted digital divide driven by caste codes in mainstream media spaces, which are mostly dominated by upper-caste men.

Not having found a space for his politics in the mainstream world, he finds social media platforms helpful in articulating his experiences through his art, without any manipulation. In his words, the digital platform “creates alternative possibilities of expression without repression”. 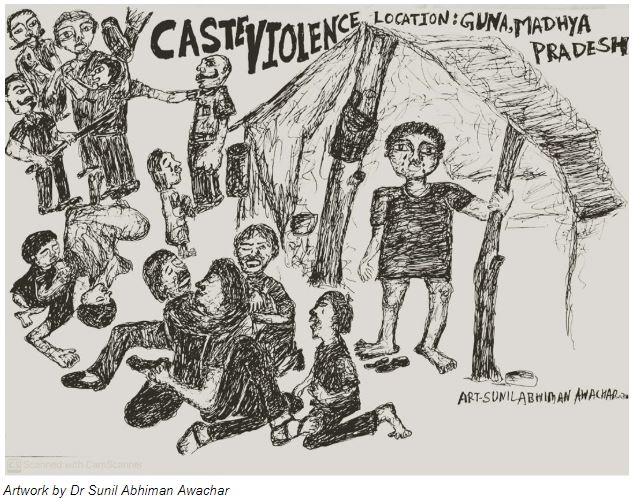 Art as a means to dissent

Social media has become the go-to place for people to get their news. It is involuntary then, that art around news, the art of dissent has become the new norm.

Kamran Akhter, a visual artist, feels that this is a new phase in art history where our collective political consciences have never been more in tune.

“Recently there has been a series of crises, be it the Citizenship Amendment Act, The new draft Environment Impact Assessment (EIA) 2020, migrant workers crisis during lockdown, black lives matter, or Femicide in Turkey. All of it has led to an unprecedented response on social media and Art had a major role in exemplifying any of these causes.” 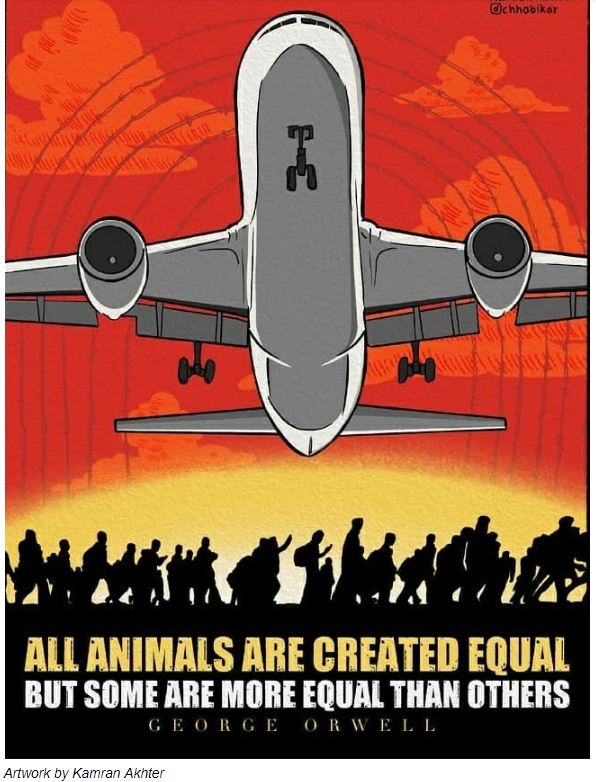 Last year saw events and happenings that were unprecedented in Indian political history before. From the re-election of the Narendra Modi government to massive sit-in protests against the controversial Citizenship Amendment Act, the year was abuzz with political fervour. In such politically charged times, art cannot remain neutral.

Art in itself is political, says *Ridhima, admin of Smish Designs. It is meant to change people’s perception of what they hold as reality. “Whatever I feel is wrong or unjust I feel like challenging that and putting it out as art. That makes it political,” she says.

For a lot of artists, things changed drastically after the 2019 elections. Ridhimma too learnt illustrations after that to channelize her dissent against the government. So was the case with the admin of OurDirtyUnderwear.

“Just after the second tenure of the current government started, I started noticing a lot of patterns of behaviour that were very problematic, not just in their outlook but also in the vision of the nation. It caused me a lot of pain to see such situations around me, and I remember feeling helpless and powerless. I was amazed by the clarity with which a few artists used to voice their opinions about the happenings in India and the world. They weren't just a reflection of circumstances but also a commentary. So I started by making pieces that would comment on such happening.” 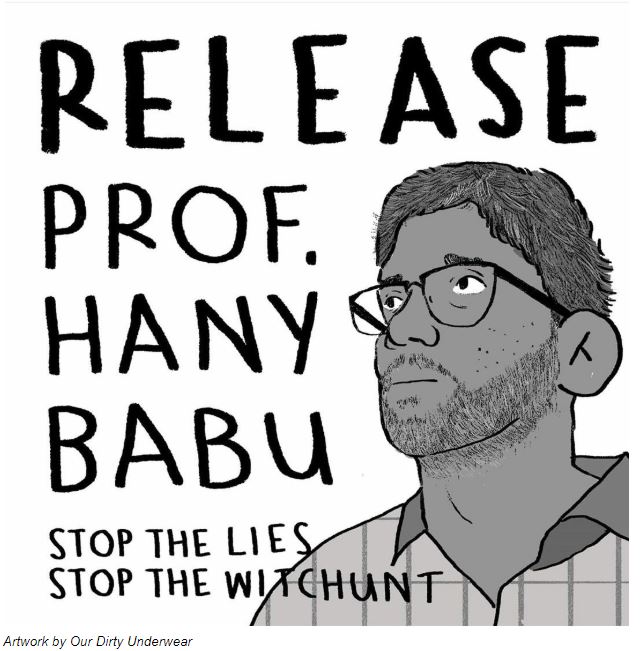 For both of them, dissent through their artwork on social media has been easy, as they have chosen to remain anonymous.

Social media has given artists everything they would have ever wanted, a democratic space with a massive reach. Unlike traditional methods of art that takes years to trickle down in collective memory, the effect of a strong piece of digital art is massive and almost instant.

“I receive such humbling and honest messages in my DMs - a lady mentioned that she has two sons and my art changed her perspective on parenting. She had not considered the idea of toxic masculinity and gender norms affecting children early on in their lives. She wants to raise men who "respect women, cook and clean for themselves and are not afraid of being emotionally vulnerable." These are her words,” says Aastha Sahdev, whose work challenges gender norms and patriarchy.

However, like any other field, this freedom comes at a cost. Aastha and many other digital artists receive hate messages, ranging from polite dissent to death and rape threats. The plethora of hate and negativity hurled in their way, makes them succumb to block people, delete a particular artwork, and also self-censor.

To add to this, is the fear of governmental suppression, in the form of UAPA, especially for artists who are engaging in politically charged art. “These are such grave times that I am scared of the UAPA act on me on some levels. I am extra careful these days of what I put out,” says Ridhimma. 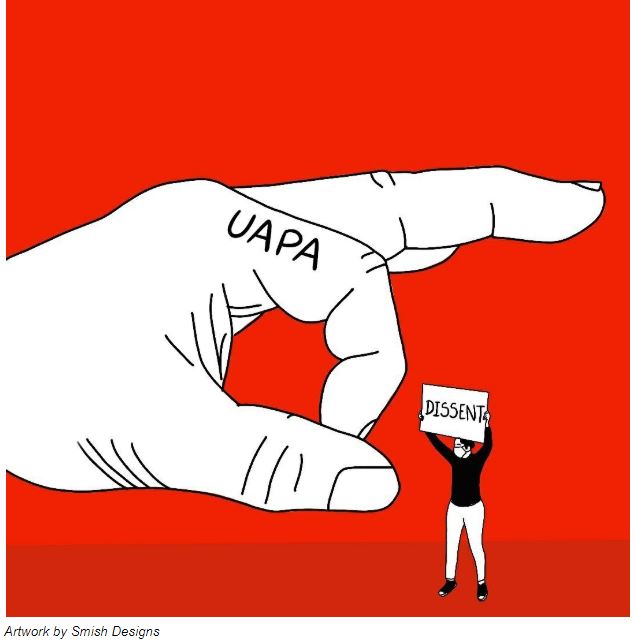 What compels her to keep going forward is the hope that she sees instigated in people through her artwork. “During the anti-NRC and CAA protests, many artists including me were creating art around it and when I saw that artwork going to the streets. It actually became protest art when it went out to the public.”

However, many are still deprived of this facility. Describing the internet as an “echo chamber”, OurDirtyUnderwear’s admin is frustrated that her art has no direct line of communication for whom it is meant.

“We are stuck in an echo chamber, where people who are listening are already mildly aware. (They) are the ones this information and art reach(es) first. It trickles down very slowly from there,” they tell the Citizen.