Meet Gopal Menon. A dashing young documentary filmmaker, has recently made a brilliant three-minute short film called Broken Camera. Apart from making documentary films, Menon is also a human rights activist and travels across sensitive zones to make films on different areas where there has been or is violation of human rights.

In a one-to-one interview, he opens up on his background as a documentary filmmaker and focusses on The Broken Camera.

Let us hear about your entry into the world of socially and politically relevant documentaries.

I made a small film called A Wounded Valley on human rights violations on Kashmir in 1998. The film was shot by a friend on Hi8 camera. Well-known documentary filmmaker and human rights activist Tapan Bose asked me to edit it. That got me hooked to Kashmir.

In 1999 I travelled to Kashmir to shoot a comprehensive film on the Kashmir dispute. Sadly, I cold not get a producer. So I made a 28 minutes film on enforced disappearances in the valley, called "PAPA 2", which was a notorious interrogation centre in Srinagar. This was my first documentary as a professional independent filmmaker. I could not screen the film even once in India as no one was interested. 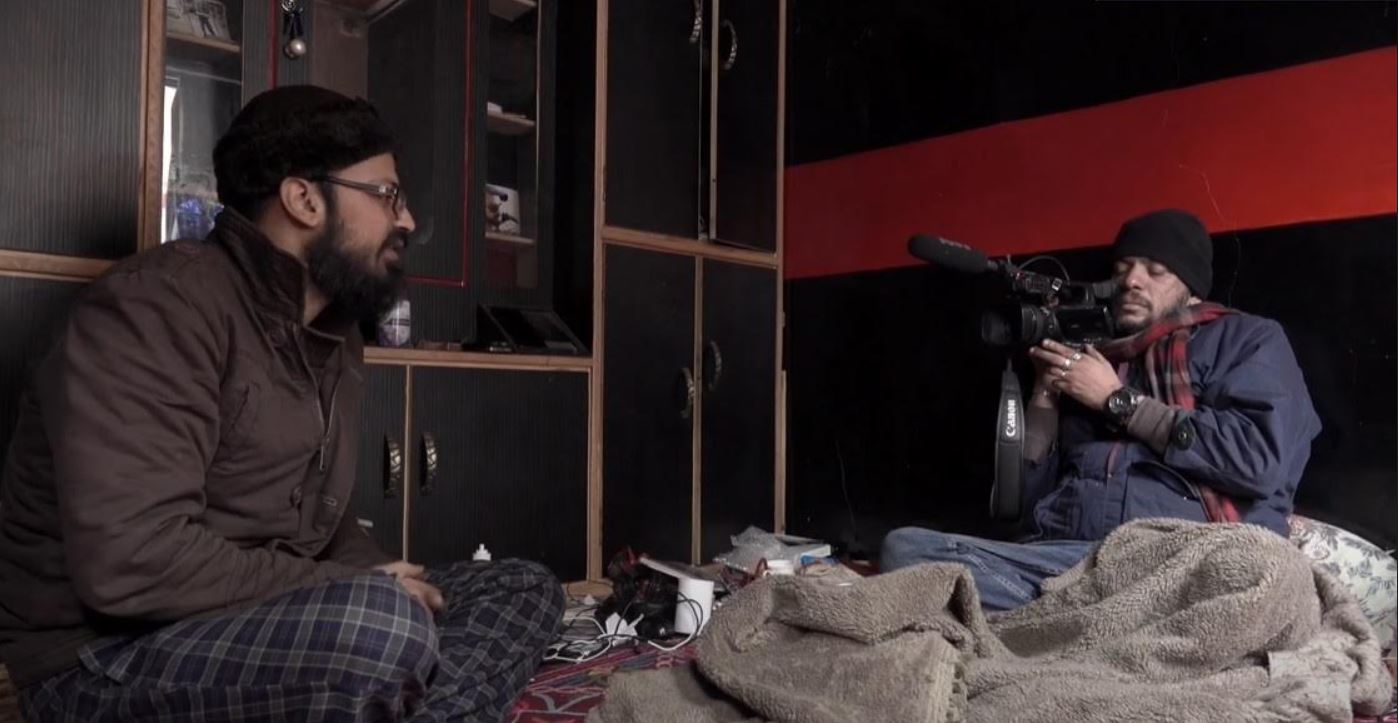 Then how did The Broken Camera enter into your world of filmmaking?

In 2016 I introduced Remy Ayline a human rights activist to my friends in Kashmir. He met Xuhaib Hamzah, the protagonist of The Broken Camera and we became friends. Reny introduced me to Xuhaib. On September 4, Xuhaib was sprayed with pellets. I had carried the camera with me as I wanted to shoot a general film on pellet victims in the valley. Almost an estimated two thousand people were partially blinded, some completely and a few killed by pellets.

I shot with many pellet victims and finally met Xuhaib. He was in bad shape mentally and physically. But he was very friendly. We shot with him and I decided that I will make a feature length documentary on him. In 2019 I shot with him again. I never had the intention of making a short film on this subject. But when I came across one I did it from the material I had already shot from Kashmir, as I could not go there due to Covid.

What, or who was your inspiration for The Broken Camera?

My inspiration is Xuhaib himself. I have seen him sleeping in a dark room, not able to see sun light. The film tells the story Xuhaib's grit and determination to reclaim his life from the brink of suicide against the backdrop of the trouble torn Kashmir Valley.

How did you achieve the impossible within the brief span of 3 minutes?

I believe it is more difficult to make a short documentary than a long one. You have to condense information within a condensed time span. I believe short films are necessary in present times as people watch a lot on WhatsApp, YouTube and other social media handles especially on mobile phones.

I might make an hour-long film in the same subject later. Along with my editor G Balakrishnan, I chose one element of Xuhaib's story which has many dimensions. It is a heart wrenching story but also a very inspiring one of how Xuhaib came back to life.

How difficult was it to cut a long film to just three minutes of screening time?

It was really very difficult to cut down from hours and hours of footage to fifteen minutes and then down to three minutes. The original plan was to make a long film. The process was very difficult as the editor was based on Mumbai and the online editor was in Calicut, Kerala and we could not work together because of Covid 19 restrictions. Moreover, the second camera unit was shooting in Kashmir on images sent by me for additional visuals.

This process of more than two months was coordinated by me on mobile. It was very stressful working on film with few hours of sleep with the crew stationed in different places.

Do you have the footage if you have overshot?

Yes, I have hours of material for the larger film which I plan to use for a feature length film. Xuhaib represents the young generation of Kashmir. He was born in 1988 and militancy started in the valley in 1989. This generation has been living in the shadows of war-like situation for the last three decades.

The footage will be used to tell the story of the trouble torn valley of Kashmir through the eyes of its protagonist Xuhaib Hamzah, whose story can motivate people.

Your subject is a very friendly, cheerful and charming sort. What kind of rapport were you able to build with him?

I have shot almost all my films in conflict situations. I have interviewed a lot of victims who have gone through such situations as Xuhaib or worse. But we bonded very well from the minute we met. Suddenly Xuhaib would be ready to talk in front of the camera. Once he started, he went on and on for hours and sometimes would even forget food, which was difficult for me.

After we met in December, 2016, I personally met him only in November 2019. I constantly tried to motivate him and we became thick friends. But the credit of his recovery goes only to him, his girlfriend, family and friends.

Xuhaib is a very strong-willed person who is in the process of reclaiming his life and career after the extremely unfortunate incident which toppled everything in his life.

What has been your takeaway from this film - as a man, a filmmaker, a human being?

Xuhaib has motivated me to come out of my depression as I was going through a very low phase emotionally and professionally. Xuhaib had told me on camera if he found the security personnel who shot him with pellets, he would ask him why he did it but he said that he had forgotten the man. That was a learning experience for me too. It helped me reconcile with my separation from my girlfriend of years.

Xuhaib taught me that sometimes one has to just let go, you have to ignore people who hurt you and march ahead. Xuhaib has made me a more empathetic and humane by nature. I have rediscovered my craft too. In my earlier films from 2000 to 2005, I was very careful and conscious about both content and form.

Of the many documentaries you have made in different genres, which five are your personal favourites and why?

My most favourite film is my first film "PAPA 2' as it was my first film as a professional independent filmmaker. The whole film was shot on a hand-held camera. Because it was a controversial subject it took two years to release after it was completed.

The second one is Hey Ram : Genocide In The Land Of Gandhi as it really played a role in creating awareness all over India and even some countries like the US and the UK about what really happened in Gujarat pogrom. The mainstream media had not or under reported the real story. This was the film that gave me recognition as documentary filmmaker.

Third one is Naga Story : The Other Side Of Silence which was the first major documentary done on North East and addressing nationality question. It is one of the few films for which we created music and had a great crew. It took five years to complete. I think this film is my most complete film and won best feature length documentary award at Spirit of Himalaya festival, Amsterdam.

The fourth one is Resilient Rhythms, the first comprehensive film in India on Dalit question and was shot in ten states. It took five years to complete. This was a truly experimental film and we used Dalit songs, Dalit music and graphics instead of a narration text and it is one of my most innovative film where we have played around with the form a lot.

The fifth film I like the most is Let The Butterflies Fly released in 2012. It was on transgenders and sexuality. The film was awarded the best feature length documentary award at the Mumbai International Queer Film Festival. This film also took more than three years in the making and made me aware of LGBTQA and sexuality issues.