I hate to use the word “obituary” when I pen a tribute to a great master who has passed away. “Obituary” is too definite a word to define a person who leaves his massive amount of creations behind and never really “dies.” Physical departure does not mean he is gone forever. “Tribute” is a more positive word because it liberates the great personality from the time-frame we place him in.

But there cannot be any time frame for a man like Soumitra Chatterjee, a multi-talented man who gave 60 years of his 85 years to different field of creative arts and literature and specifically, contributed to the sustenance and promotion of the Bengali language uncorrupted by wrong diction and grammar, intercutting with other languages like Hindi and English and in keeping it as pure as it ought to be.

It is sad that his standing as an actor in Bengali cinema is always associated with his work in the 14 films directed by Satyajit Ray. Because the canvas of this huge painting cannot be framed in one picture as his total oeuvre over 60 years comprises over 300 films over 60 years.

There are dozens of films where his performances have demonstrated his mastery to deconstruct himself of any stereotypical “hero” image in films by directors known, unknown and little known in incredible roles, films and performances the national and international audience does not really know about.

One of the sterling examples is his performance as Khit-da, the dedicated, very poor and determined swimming coach who trains a young girl Kony, to participate in the swimming championships. She is extremely poor and is discriminated because she is poor and belongs to a very poor home. The name of the film is Kony (1982) directed by Saroj Dutta and based on a story by noted author the late Moti Nandy.

The actress Sreeporna Banerjee, who played the title role, was a real-life swimmer and says, “just watching him at work was learning from him. He was a very inspiring and grounded teacher and never made me conscious of working with a great actor.” She did not return to acting after this film. Soumitra’s catch-phrase, “Fight Kony Fight” became famous as a political slogan in time to come.

Pratinidhi, (1965), directed by Mrinal Sen has been watched by very few because today, not a single print of the film survives. It is based on a story called Prochhodpat (Cover) penned by Achintya Kumar Sengupta. In the film, Niren (Soumitra) plays a young man who falls in love and marries Rama (Sabitri Chatterjee) a young widow who has a five-year-old son. But the son not only refuses to accept Niren as his new father but also creates problems for is mother that do not allow the couple to consummate the marriage.

Frustrated and guilty, the woman commits suicide and Niren is faced with the responsibility of bringing up the boy alone as his son. It was a human tragedy based on a non-conformist issue of relationships within marriage. It is a film lost to history. Soumitra worked in this film soon after he debut in Ray’s film so may be it was not noticed much and faded without trace.

One film Soumitra held very close to his heart was Agradani, produced and directed by Palash Banerjee who was related to the author of the film Jnanpeeth Award-winner Tarasankar Bandopadhyay. Agradaani is a sect of very low class Brahmins whose responsibility it so eat the ritual food at rich people’s home after someone dies in a rich man’s or high caste family’s home. He is extremely poot and is called upon to guard the door when the zamindar’s wife is expecting a baby.

But like every time, she delivers a dead infant and the Agradani priest Punya Chakrabarti (Soumitra Chatterjee), takes away the baby and places his own wife’s baby there. But the irony of his life is that when this boy dies, he is forced to eat the death ritual feast of his own son. He is forced to do this because his daughter is to be married and his surviving son is to be educated so the money/land is necessary for him.

Soumitra held his performance as one of his career best. But the audience failed to accept him in this changed image with a darkened skin, rustic clothes and demeanour and his terrible greed for food. Ironically, without an agradaani priest, the death feast rituals cannot be complete. 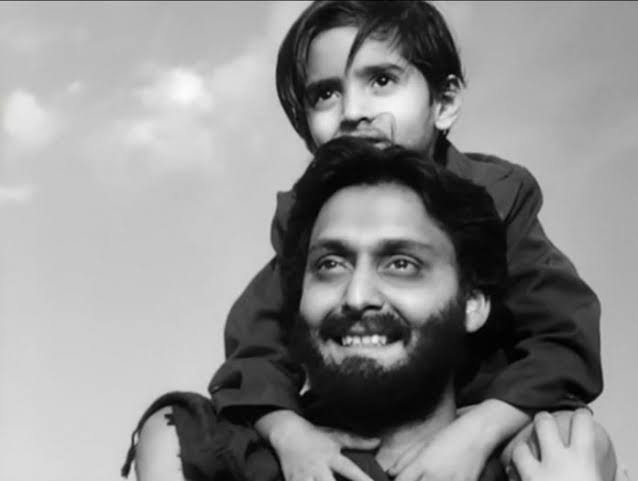 Tapan Sinha’s film Wheel Chair is perhaps one of the most multi-layered and complex roles Soumitra Chatterjee played in his sixty-year career. It is said that he practiced moving around in a real wheel chair much before the shooting began because he wanted to familiarize himself with moving around in a wheelchair that would demand a different body language and also demonstrate a persona completely different from how normal men and women move around. Dr. Mitra’s was a character that made physical, emotional and social demands on the actor who was portraying it – Soumitra Chatterjee. And he not only fulfilled these demands but crossed the borders with his immortal performance. For Wheel Chair, he practiced moving around a wheel chair long before shooting began. “I discovered that the very act of riding a horse or moving about on a wheel chair helps somewhat to give an insight into the character. A man’s world-view changes when he is on horseback, so also when he is moving about on a wheel chair,” he elaborates. 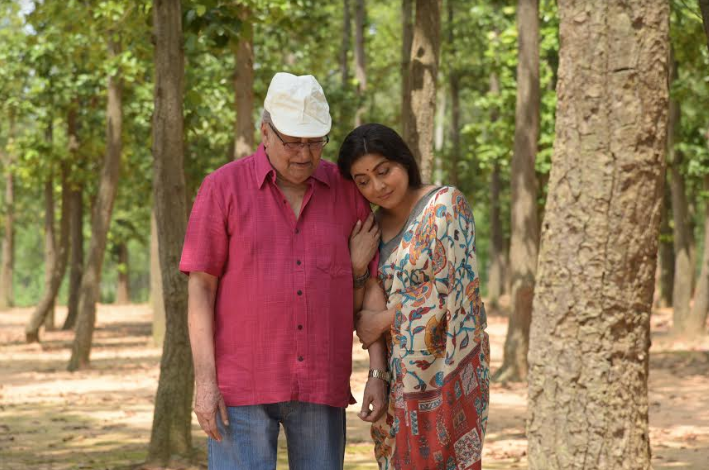 In Podokhhep, directed by Suman Ghosh, the role that fetched him the National Award, he played Shasanka Palit, a lonely old man who lives with his unmarried daughter and has constant clash of values with her. “The film opens with a shocking symbol of death. The strap hanging Palit inside a moving metro looks out in fear at himself waiting outside on the platform, having failed to catch the train. The Palit inside the moving train is perhaps moving away from life. The Palit on the platform encapsulates the memories and experiences of his life. This scene is repeated when Palit really looks outside the metro train and is shocked to discover a frightened and confused Trisha standing on the platform,” elucidated Chatterjee.

But theatre remained his first love. Elaborating on this, he said, “Acting in theatre is acting in real time. It is continuous, sequential, and chronological. The rehearsals for a play take care of the actor’s preparation for his role. The response too, is immediate. Cinema does not demand acting in real time. It is discontinuous, not sequential and not chronological either. There are no rehearsals for cinema. So, the actor must prepare for his role through discussions with the director, by reading and re-reading the draft of the script,” said the actor, detailing his perceptions about the differences in the two media.

He learned horse riding for Tapan Sinha’s Jhinder Bondi where he played the villain opposite Uttam Kumar’s hero in a double role. He played a mentally deficient man who retains his naivete and his innocence in a film called Aparichito where Uttam Kumar played the negative hero who he befriends.

He learned horse riding for Tapan Sinha’s Jhinder Bondi where he played the villain opposite Uttam Kumar’s hero in a double role. He was nominated for the National Award once, for his performance in Gautam Ghose’s Dekha, but had declined the award while other awards, titles, felicitations and tributes kept flowing in.

This includes the Padma Bhushan, a BBC documentary on his life and works called Gaach, meaning ‘tree’ and the Sangeet Natak Akademi Award for his contribution to theatre. He has directed and acted in more than ten significant plays with some successful shows abroad. He has authored more than ten books of poetry, beginning with Jalapropater Dharey Dandabo Bole (To Stand by the Waterfall) in 1975.

Among his latest films that fetched him some prestigious awards is Atanu Ghosh’s Mayurakshi where he plays an old father who is slowly slipping into loss of memory. How he copes with this in his own way marks the journey of the film. Between Raindrops is another recent film directed by Sudeshna Roy and Abhijeet Guha. In this film, Soumitra plays the role of retired professor Amit Roy (Soumitra Chatterjee) probably in his seventies, married to Subha who is half his age. Subha willingly surrenders her identity to pour it into the contours shaped by Amit. She is not only madly in love but is forever scared that if he loses his memory, he will forget her. Her husband takes her complete dedication to him, his life and his health entirely for granted, as a given, not even aware that she dresses up, wears only such colours he approves of. 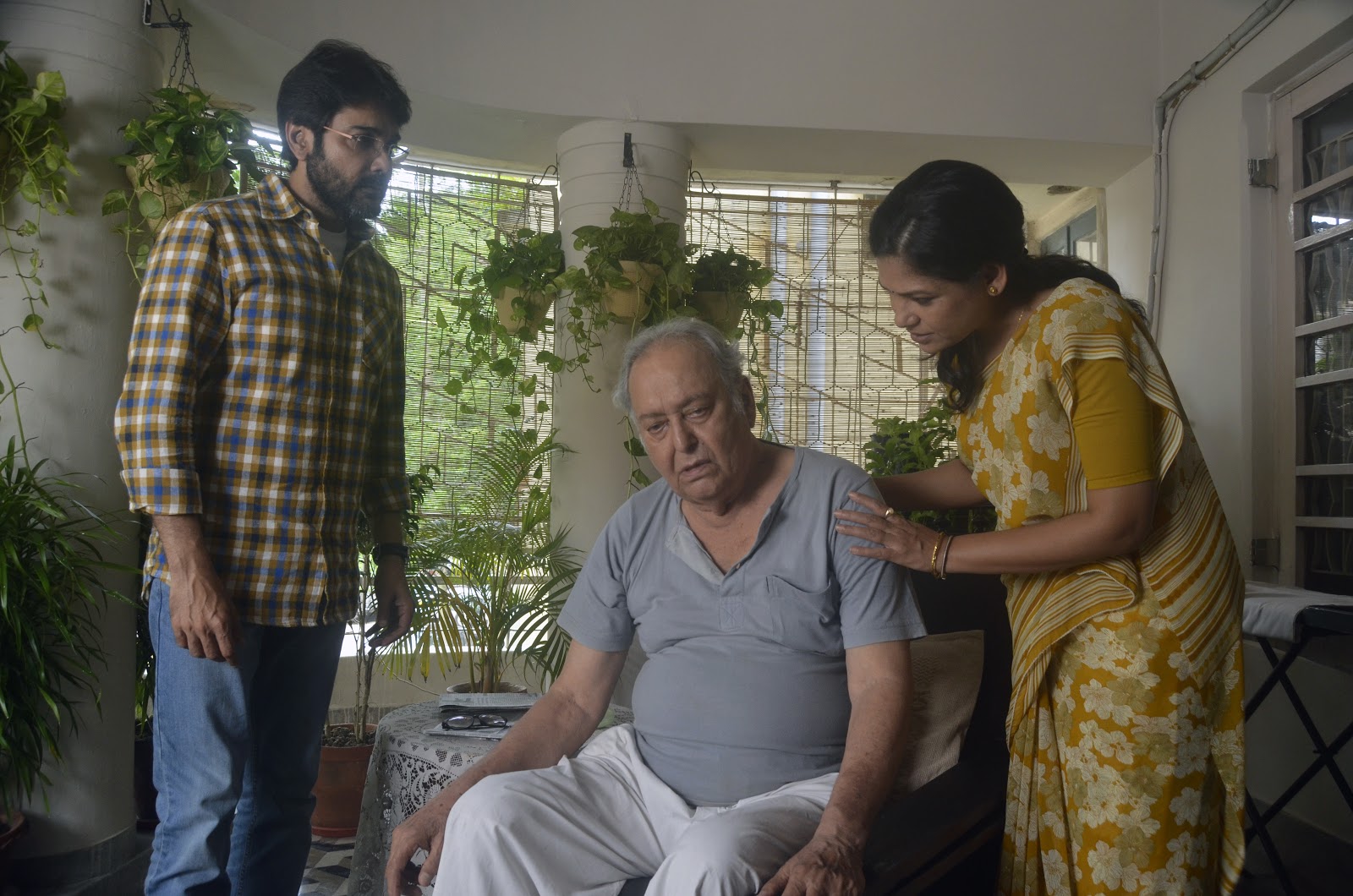 He directed and acted in more than a dozen significant plays for the Calcutta stage. Around eleven books of poems penned by Soumitra have been published beginning with Jalapropater Dharey Dandabo Bole (To Stand by the Waterfall) in 1975. Droshta, an abstract translation of Khalil Gibran’s The Prophet, was published in 1995. I had the good fortune to watch four of his stage performances and each of them was mesmerizing.

He had to slowly give second place to his theatre which he loved mainly because of his age and health issues and also because he had the entire responsibility of running a big family to cater to. His wife Deepa is very ill, his grandson Ranadip Ghosh is partially crippled due to a critical accident and his son is a schizophrenic and cannot do productive work. So, when he went out to shoot for a documentary on him named Abhijaan, he came back to fall ill with Corona and we know the rest.