The letters tell a different story

“The heart is not stone or steel but will be moved. The eyes are not lifeless cracks in a wall but will shed tears at the panorama of death and at India’s desolation. The city of Delhi was emptied of its rulers and peopled instead with creatures of the Lord who acknowledged no lord—as if it were a garden without a gardener, and full of fruitless trees.”

This is the image Mirza Asadullah Khan Ghalib invoked to describe the dire situation in Delhi during the Revolt of 1857. While many eyewitness accounts of the revolt have been published in books of history, Ghalib’s account is slightly different as it expresses anguish for the loss of the very soul of Delhi.

Dilli was Ghalib’s home. It was emblematic of all that the famous poet stood for—the beauty of Urdu, the tehzeeb (culture) of everyday conduct, the bazaars of Chandni Chowk and the splendour of the Red Fort. With the revolt, he writes, any semblance to the city he loved was destroyed.

Ghalib came to Shahjahanabad when the authority of the Mughals had begun to fade away. The city had been invaded multiple times and its inhabitants were living in a deplorable state. Many of his contemporaries, such as Mir Taqi Mir and Shaikh Muhammad Ibrahim Zauq, wrote poetry in the shehr-e-ashob genre of poetry reworked in these times to mourn the loss of Delhi’s grandeur.

Ghalib too had to bear the burden of living through the carnage of 1857. He writes: “For you this is only a sorrowful story, but the pain is so great, that to hear it the stars will weep tears of blood.”

Ghalib writes about experiences of the revolt in the diary he kept from May 1857 to July ‘58, the Dastanbuy (Persian for bouquet) in which he describes the looting and killing that took place during the hottest months.

On a first read the diary seems overtly sympathetic of the British and critical of the rebels, who he says were ‘destroying the honour and prestige of Delhi.’ But we must remember that with Mughal power on the decline, patronage was hard to come by, and it was the British who were now Ghalib’s benefactors. As he reminds us, right from his childhood he had ‘eaten the bread and salt of the British’. In such circumstances, scholars say, Ghalib used the Dastanbuy to petition the British powers ‘for title, for robe of honour, and for a pension.’

After the British won, they suspected Muslim Delhiites of sympathising with the rebels. Many including Ghalib were rounded up for waging war against the British. Publishing the Dastanbuy in 1858 was thus a way for the poet to ‘seek the shelter of the Lord from these unwarranted arrests.’

As the scholar Shikoh Mohsin Mirza wrote, ‘In a letter sent to his pupil-friend Munshi Hargopal Tafta in August 1858, Ghalib writes—“I want to get it (Dastanbū) published immediately so that I can send a copy to Governor General Bahadur, and another through him to the Queen of England.”’

In the book Ghalib went to great lengths to condemn the rebels. Giving an account of May 11, the day the revolt broke out, he wrote that ‘rebellious soldiers from Meerut, faithless to the salt, entered Delhi thirsty for the blood of the British.’ These ‘wayward, hostile rebels’ looted the women’s ornaments, killed officers in their barracks and ‘ravished the city like madmen.’

The British meanwhile took control of the Ridge and converted it into ‘a kind of fortress.’ By September they had occupied Kashmere Gate and Delhi had slipped from rebel hands. Not surprisingly, Ghalib paints this time as a moment of liberation: ‘After four months and four days the shining sun emerged and Delhi was divested of its madmen and was conquered by the brave and the wise.’

But pakka Dilliwala that he was, he could not stop himself grieving the attack on his fellow residents, even if it was committed by his patrons: “Their anger at the citizens of Delhi was so great that, after capturing the city, one would think they would leave not even a dog or a cat alive.”

Numerous letters to his friends, however, indicate that the poet was as angered by the British as the rebels. In one he wrote of British cruelty towards Delhi’s people:

Sarcastically commenting on the British government’s decision to first ban Muslims whom they distrusted from Delhi, only to allow them in later for a fee, he wrote:

“Whether a Muslim can come back to the city depends on how much of the fee he can pay. The government of course decides on how much you will have to pay. They ruin you but they say you are settled again.”

As the Urdu scholar G.C Narang observed, ‘if we wish to know Ghalib’s real attitude towards the Mutiny, the Dastambu is not enough; we must also take his letters into account. At the most, we may take Dastambu as Ghalib’s “well-prepared defence.”’

The rast khezi bija, or ‘the unwarranted revolt’ as he called it, took much more than his city—it robbed him of his characteristic wit and humor. Even poetry, his dear companion, could no longer provide him solace. He writes, ‘how can poetry soothe me when my heart is burned with hot sighs?’ While his pension was restored in 1860, his desire to become a poet laureate was never realised.

Ghalib could not ignore the violence both sides had unleashed on his beloved city. For Ghalib it was Delhi and its mohallas that had suffered. The mushairas of the Qila-e-Moalla (Red Fort), the hustle-bustle of the streets of Chandni Chowk, the sellers and merchants who were the life of the city, were all gone. Ghalib wondered if Delhi was anything without them:

“Delhi meant the Fort, the Chandni Chowk, the daily bazaar near Jama Mosque, the weekly trip to the Jamuna Bridge, the annual Fair of the Flower-sellers. These five things are no more. Where is Delhi now? Yes, there used to be a city of this name in the land of Ind.” 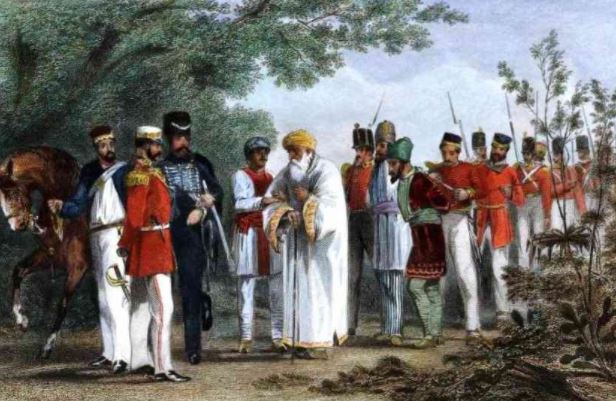 This article is part of Saha Sutra on sahapedia.org, an open online resource for Indian arts, culture and heritage