The 18th Kalpanirjhar Short Fiction Film Festival had to be postponed to 2021 due to the pandemic. Fortunately, the festival was physical and not virtual which is difficult to follow or even respond to as the film buff would to a theatrically organized festival which we can truly enjoy.

This is an international film festival because one gets to see short fiction films from across the world though the Indian short fiction films are specially ear-marked for competition. Usually, we have a fine blend of all formats – animation, Black-and-White, abstract films, non-linear narratives that open up platforms of a newer viewing experience.

Different film schools specially from Europe send their student films to the festival. Despite the pandemic, this year was no exception. For the regular attendees of this festival, the shift in the venue to the Tagore Centre was a welcome shift in terms of easy mobility and prime positioning. This year, we had 66 entries from 16 countries.

Among the founder members of the Kalpanirjhar Short Fiction Film Festival are – S.V. Raman who is currently the Director of the Festival and has been the Cultural Secretary of the Max Mueller Bhavan when it was the cultural centre of the German Consulate, filmmaker Goutam Ghose, theatre and film scholar Samik Bandopadhyay, filmmaker Sandip Ray, Nilanjana Ghose and the most active behind-the-scenes organizer Robin Banerjee.

The festival paid a tribute each to Soumitra Chatterjee – actor, theatre person, playwright, poet and litterateur, who passed away recently and also to Jagannath Guha, filmmaker and voice artist whose golden honey baritone and impeccable English was much in demand in the film industry for voice-overs and commentaries. Goutam Ghose presented a small video comprised of clips from some films of Ghose Soumitra had played lead roles in.

This critic will limit herself to some of the Indian competition entries she was fortunate enough to watch. 16 films had been entered for the competition of which I could get to watch nine that threw up completely different perspectives on life, people and relationships.

Junction, directed by Pratik Gupta which bagged the top prize is a 15-minute unfolding of a very unusual and brief friendship between a street urchin who spends his time on a railway platform and a library clerk who has walked away from her home. They meet on the railway platform and the very friendly boy gets emotionally close to this young woman.

The language they speak in differs reflecting their educational and social backgrounds which, however, makes no difference to them. The sound of the constant running of trains to and fro, the railway platform cutting into the woman’s narrow workspace makes the film a beautiful statement on how two people strip themselves of their loneliness through a temporary but close bonding between them. The film won the Patton Award for the Best Film.

Bebaak means “defiance.” This spells out the subject of this short feature film based on facts as they exist around us. Bebaak directed by Shazia Iqbal, with a running time of 20 minutes, won her the Best Debut Director, International and Audience Choice award at the 30th Sao Paulo International Shorts Film festival. The film has won more than a dozen awards including the Audience choice award at Indian Film festival of Los Angeles, the top award at the Critics Choice Award and the Kalpanirjhar prize.

Unable to rely on her cash-strapped family to further her education, Fatin, an ambitious Architecture Student from a lower middle-class Muslim family, seeks out a scholarship from a conservative Muslim Trust. During the interview, she gets reprimanded by the interviewing officer for not following the religious tenets meant for women. The poverty-stricken ambience of the home surroundings is brought out lucidly through the production design and choice of locale. Fatin has younger sisters and a brother and the father finds it impossible to fund her higher education. She refuses the scholarship because she does not agree with the extremely fundamentalist mindset of the organization offering the scholarship

Behind the Moon directed by Samrat Chakraborty is a telling account of how a small-time craftsman who carves temples and masjids on grinding stones is incidentally caught in the religious fragmentation between Hindus and Muslims in a suburban neighbourhood when he makes a mistake in grinding the wrong image on the wrong grinding stone.

Sandeh is a very powerful statement on the abuse of a female member of a film crew who have come to shoot their film on location. Though it has an open end, one gets to learn who the culprit is just by a single dialogue uttered by another female colleague of the crew. It is directed by Sunil Sukhtankar who has made wonderful films jointly with Sumitra Bhave. This is his independent venture. The script is a bit confusing though that keeps some strings lose and hanging.

3 Star Split directed by Shib Ram Sharma in Bengali is a very normal kind of film that depicts how an air conditioner set in their bedroom creates conflict between the husband and wife. The only feature of the film that makes it a worthy watch is the excellent acting by Rajatabha Dutta and Aparajita Addy as the couple.

Letter to Home directed by Mukul Haloi from Assam recreates a part of the politically disturbed history of Assam through the characters’ oneness with Nature. It harks back to the time when migrant birds flew down and deliberately hit themselves against the streetlights to kill themselves, creating a mystery that has never been solved.

The cinematography is one of the most beautiful work in this entire crowd of Indian films at the festival. The violence in humans is pitted against the beauty of Nature through the eyes of a young boy, a pregnant young woman and her mother-in-law who has a telepathic gift of sensing Nature’s moods.

Beholden directed by Akshay Gouri is about how a young woman’s life can be completely destroyed by her direct experience of her mother’s being battered by her father leading finally to her mother’s suicide. As an adult, she cannot cope with life with her husband and yet dutifully takes care of her Alzheimer-affected father. The last scene where she is celebrating Lohri with her father is moving.

The most outstanding film according to this critic is the Marathi short film White Flakes directed by Himanshu Singh. Narrated partly from the perspective of the seven-year-old Vithu, it is a brilliant unfolding of a small boy’s first encounter with Death which he does not know anything about and where white flakes (white popcorn used in the death rituals of men and women) function as the agency that helps the little boy to perhaps clear his confusions about death.

The short fiction film has come of age. It goes to the credit of organizations like Kalpanirjhar to raise this genre to a higher platform. 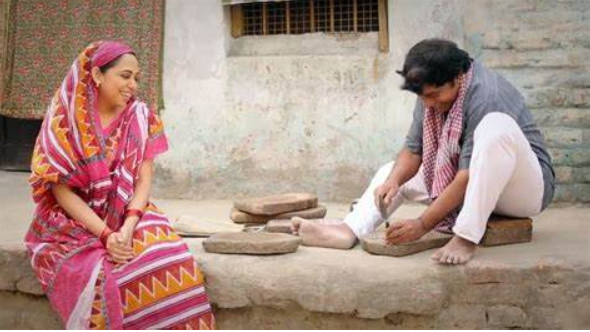