Death, in Hindi cinema, has been used as highly dramatized melodrama inviting the audience to pull out their handkerchiefs and cry along with the mourners in the film.

At times, the melodrama is exaggerated to extremes even in an otherwise classic film like Guide directed by Vijay Anand, or, in Bimal Roy’s Devdas which however, was a faithful translation of Sarat Chandra Chatterjee’s literary classic.

Exaggerated melodrama has become archival in very significant films such as Sholay, Deewar, Fanaa, Baazigar, Darr, and many more films much to the detriment of the beauty of the films but very fruitful for the box office.

In Guru Dutt’s iconic film Saheb Bibi Aur Ghulam, the killing of Majhli Bahu (Meena Kumari) is not shown but is suggested. It is only in the end when the city overseer (Guru Dutt) comes to supervise the demolition of the haveli when he finds the skeletal remains of Majhli Bahu buried under the ground. The bangles on her hands and other jewellery reveal her identity thereby, uncovering the brutal nature of death within aristocratic zamindari families of the period the story is set in.

Two beautiful picturizations of Death brings back memories of Ramesh Sippy’s Shakti. One scene shows the death of the character played by Rakhi in a shot aimed at her husband the police officer Dilip Kumar who steps into the morgue, touches the hand of his dead wife and turns around to ask, “but her hand is warm, sir, her hand is arm.” T

he other, showing the wayward son (Amitabh Bachchan) dying in the arms of his father who shot him. When the father tells him, “I love you, son,” and the dying son says, “then why didn’t you tell me?”

Two recent films offer a unique approach to Death. Both films explore the response to the death of an important member of the family and its impact on the bereaved members. Ram Prasad Ki Tehrvi marks the directorial debut of veteran actress Seema Pahwa is one of these two films. The other film is Paglait directed by Umesh Bist.

Death forms the fulcrum of both films and marks the opening of the narrative but the storylines focus on two entirely different ideologies and consequences. 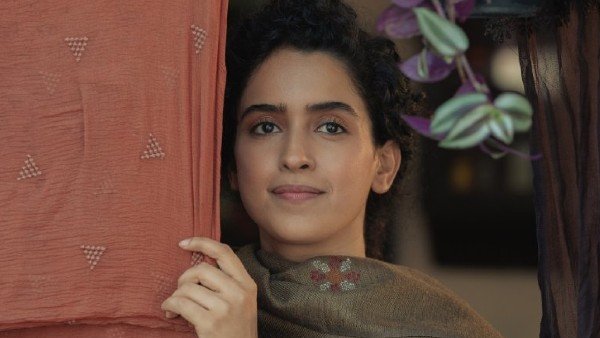 Paglait explores the reaction of the family to the sudden death of the older of two sons in an extended joint family in old Lucknow. The narrative moves slowly and surely from the deep shock the parents of the boy are reeling under while the rest of the family rally around them, to the complete lack of grief and loss with which the newly wedded wife, Sandhya (Sanya Malhotra) of the dead husband who openly asks for a Coke when her mother-in-law offers her tea.

The in-laws are shocked but the young widow does not care about the shock waves created by her behaviour. She goes through the rituals with open boredom almost like a robot.

When her Muslim friend arrives to offer a shoulder, it is her turn to be shocked when Sandhya appeals to her to take a clandestine trip to savour phhuckas (Gol Gappas) and coke! And she really does it! She orders for chips and keeps chop-chopping in her room.

The Muslim friend informs a family friend that she is a vegetarian, rejecting his offer for biryani as Sandhya’s family is vegetarian. But she does not fail to notice that Sandhya’s mother-in-law offers her tea in a cup different from the ones the family drinks from. This is a subtle pointer to break conventional ideas about another falsehood about a minority community.

But there are other shocks lying in wait. The dead son who was the sole income earner of the family and earned a handsome income, has willed away a sum of Rs.50 lakhs to his wife! All hell breaks loose. How will the family run without financial help? Will the family have to spread their palms to Sandhya for help? Or, will they agree to get the young widow married to the absolutely good-for-nothing relative of the family who has come for the tehrvi so that the money remains within the home?

Sandhya, puzzled with the huge inheritance her husband she never got to love and had wrong misgivings about his moral character, finally decides to call it quits and leave the family to take up a job in another city. But she assures her in-laws that she will leave the money for them who she has become very fond of. Her final words clarify the meaning of the film’s title.

She says, “"Ladki logon ke liye puri duniya sochti haan, bas yeh nahin puchte ki woh kya soch rahi hain." This underscores the function of death in the film as an agency for Sandhya, who holds a Masters’ Degree in English literature. This gives the entire story a dramatic twist much to the shock of her late husband’s parents and her husband’s grieving younger brother who is smitten by Sandhya. The other relatives leave in a hurry including the young man who offered his hand in marriage.

The film suffers from a few logical lapses. Sandhya may not feel grief as she is too newly married to suffer from the sudden death of her husband. But what about the shock that comes of suddenly losing the man she is married to? Within this situation lack of shock is as illogical as is her lack of grief natural. The insertion of the “pregnancy” trick to ward off her bad suitor is also quite superfluous as is the script’s needless inclusion of the menstruation incident.

Paglait evolves into a strong feminist statement though it begins with death and a very good touch is never showing the person who died. The performances are wonderful to say the least which smoothens the rough edges of the script.

The songs used only on the soundtrack helps move the film forward while the editing and cinematography beautifully juxtapose the crowded scenes of the city, Sandhya and her friend rushing through the street on a two-wheeler against the interior scenes within the home headed by the elderly uncle with the bereaved parents reeling under the series of shocks they must face. 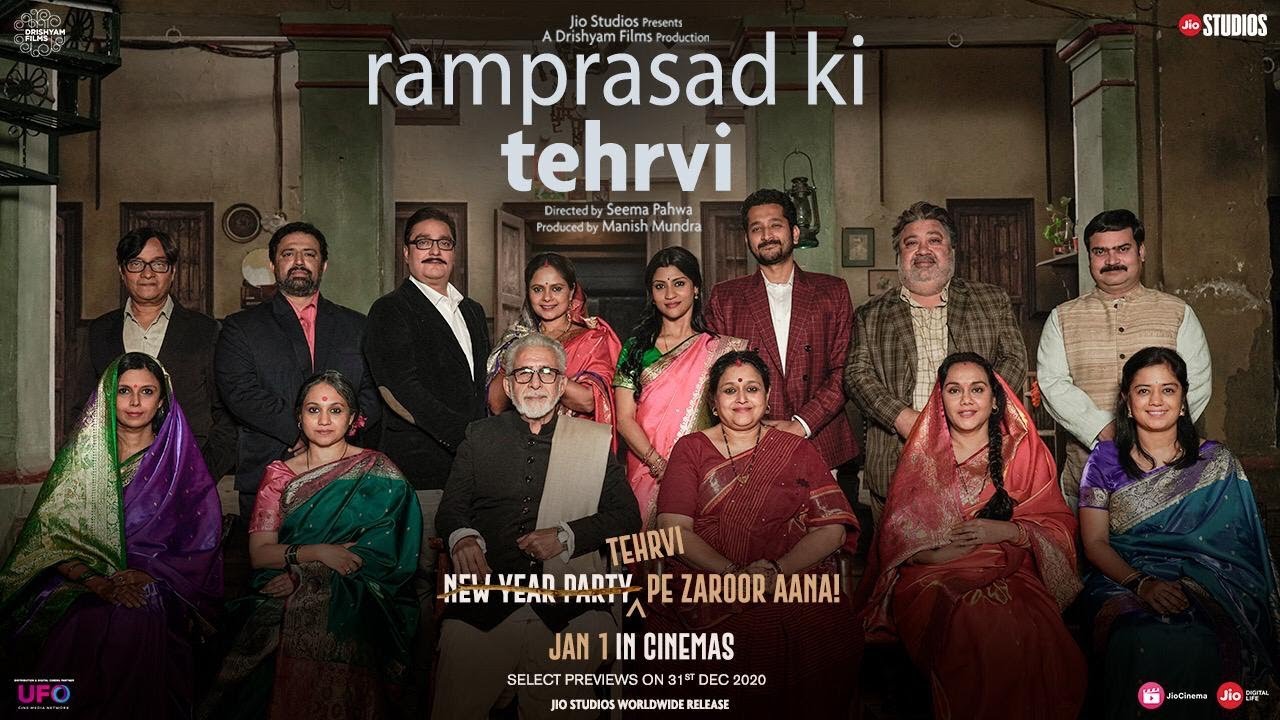 Ramprasad (Naseeruddin Shah) is a music teacher who uses every note of music and its correct tuning as a metaphor for the character of every person and in a larger canvas, for Life itself. As if as a kind of poetic justice, he suddenly dies of a heart attack and crashes on his favourite piano throwing his wife Savitri (Supriya Pathak Kapoor) in deep shock and grief.

Ramprasad’s four sons, in different degrees of “financial distress” according to their own confession, except the youngest son Nishant (Parambrata Chatterjee) who is truly sad about losing his father and more importantly, worried about his mother. The two daughters specially the elder one Raani (Anubha Fatehpuria) and her sister Dhaani (Surekha Singh) are not very fond of their brothers and their respective wives but do not wear their feelings on their sleeve and enjoy gossiping about Nishant’s actress wife Seema (Konkona Sen Sharma) who walks in a bit late.

The scenes of the sons getting sloshed in the night are a bit repetitive but brings across the hollowness and falsity of their grief as they keep bad-talking about their dead father, much to the chagrin of the youngest Nishant and their mother. If they have all arrived in the hope of finding out if their father has left them a legacy that will help them solve their financial problems, their hopes are dashed to the ground when a bank officer informs them that Ram Prasad has to repay a major slice of the Rs. 10 lakh loan he had taken plus the accrued interest! They are in no mood to repay the loan even partly but Nishant and his wife have helped in the past and suggest to Ammi that they are there for her.

There are a few very sweet and romantic flashbacks that flood into the memory of Ammi when she and Ramprasad were young and we see Parambata playing the role of the much younger Ramprasad dallying with a very young and lovely Savitri. A lovely touch. Konkona as Seema is forthright, gutsy and leaves no stone unturned to speak her mind as and when she feels she should sometimes embarrassing her soft and subtle husband Nishant.

Ammi forced to narrate “how it all happened” to every neighbour and friend and relative who walks in again and again and again is as if picked up from real life and imposed on the film. But the sub-plots of two visiting nephews trying to draw mileage from the visit where one of them takes a pretty neighbour for a ride are entirely uncalled for. The same goes for the young nephew Rahul (Vikrant Massey) trying to get fresh with his aunt Seema is also a needless diversion.

We also catch glimpses of the late Ramprasad dressed in starched white, watching the goings on following his death and slowly walking away that he can no longer set the tune right. Parambrata and Konkona are brilliant in their low-key characterisations within a loud ambience of supposed grief but the other characters of the sons and their wives are also very good.

Supriya Pathak Kapoor mainly talks with her eyes shifting from grief to surprise to smiles inspired from her memories of times spent with her husband, worries about the financial crisis ill she finally arrives at her own solution to her problem after the children and their families have left.

The film has rarely stepped out of the ancestral home of Ramprasad except some glimpses of the skyline and the terrace of the home. But it does not get claustrophobic, cinematically or script-wise at any time. Vineet Kumar as the quarrelsome, meddling Mama who has to poke his nose at every utterance is very good and so are the others. Rajendra Gupta as the English-speaking Tauji offers a different slice of characterisation and his make-up is so good that he is unrecognizable.

But what took my breath away was the brilliant, low-key, but extremely melodious musical score by Sagar Desai which is mesmerising to say the least and just right for a film that opens and closes with a man devoted to music.

In Ramprasad Ki Tehrvi, death comes as an agency for Amma, who turns her life around completely by fulfilling her life with the music class her husband ran with, as it seems when the film opened, with a single boy as his student who, he felt, was out of tune.

Thank you Seema Pahwa, for such a poetic film where prose runs like an undercurrent right below the philosophy of love and redemption. In the credit titles, the cast names appear under “Thank You” and I found this very touching indeed which says that none of the acting cast charged a paisa for their work in the film.