Ladakh Chale Rickshawalla - Amidst Cinderella Promises a Return to Reality.

Ladakh Chale Rickshawala is a documentary film that stands testimony to the grit and determination in an ordinary man despite his desperate poverty, his semi-literate status and his marginalised position in society.

Directed by Indrani Chakrabarty, a filmmaker based in Kolkata, the film also tracks the journey of the three-member film crew who try to follow Satyen Das, who takes it upon himself to ride directly to Ladakh from Kolkata on a World Peace Mission, a distance of 3000 kms with very little money and infra-structural support.

The film can be slotted as an adventure film, a journey film and in a manner of speaking, a biographical film that demonstrates how far an ordinary, humble man of hardly any means can go to fulfill his dream of making it to one of the highest points of the country, riddled by extreme climatic conditions in winter. This 44-year-old, class VI dropout barely makes Rs.350 a day.

His final target was to reach Khardung La mountain pass, the world’s highest motorable road, 39 km from Leh. Though he is aware of his humble and marginal roots, Sanat Das is a confident and smart man who makes friends easily with his passengers and with others in the neighbourhood. 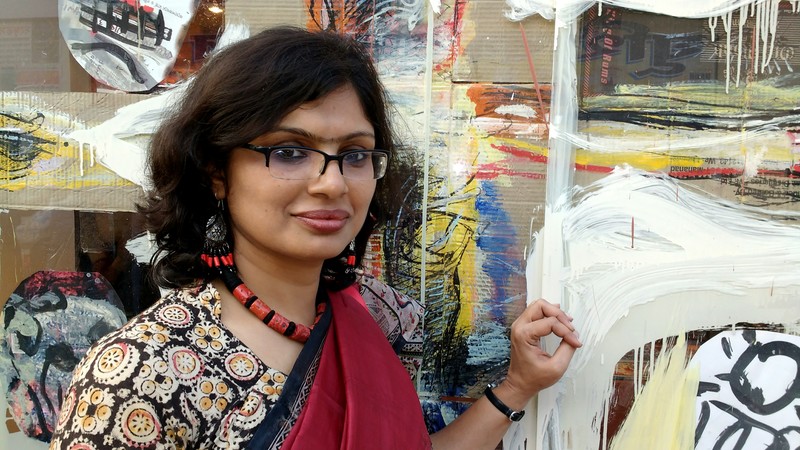 Chakrabarti says, “I met Das when he was ferrying me on his rickshaw because I live in Naktala which is a neighbourhood in Kolkata where he regularly plies his rickshaw. He told me that he had definite plans to visit Ladakh though he had no idea how to fund his journey or even a rough idea how to go about the realisation of his dream.

He said that he was passionate about travelling across the country and as he could not fund his ticket, he would go on his rickshaw. He had already been to Puri in Odisha in 2007, along with his wife Minoo and little daughter. They then travelled all the way to Rohtang Pass in Himachal Pradesh, the mountainous region that stands at an altitude of 13,050 feet.

As I am a documentary filmmaker, I felt Satyen Das offered a wonderful subject for my new documentary but funding was as big a problem for me and my minimum crew as it was for him even to embark on the journey.” Das told her of his impending trip to Ladakh through Jharkhand Bihar, Uttar Pradesh, Haryana, Punjab and Srinagar, and showed pictures of his earlier trips.

The 64-minute film does not turn static or boring at any point though Sanat Das is the main character in the film. Chakrabarti focusses on his angry and bitter wife Minoo too, as she feels that it is extremely irresponsible of her husband to leave his wife and little daughter behind with a promised ‘allowance’ of Rs.500 per week!

She works as a maid in a couple of houses and has to go to her in-law’s place for her toilet requirements. She is openly disgusted with her husband’s fantastic ambition that reaches beyond his means in every sense. “Leaving us behind to fend on our own is very irresponsible of him.”

Minoo’s anger and frustration shed light on how the high ambitions of a less-than-ordinary man comes at a very high price that takes a toll on the family he leaves behind. As Chakrabarty could not go along for the entire trip with her two-member crew, she and her team decide to teach Sanat Das how to operate a very simple handycam and capture his journey himself as he journeys with his rickshaw showcasing the banner of “World Peace” right across his rickshaw.

After travelling with Das till Burdwan, they gave him the handycam along with 15 cassettes and took their leave. Das was armed with maps, food, clothing, and other equipment, and set off on his 68-day journey, which culminated in crossing the famous Khardung-La Pass in Ladakh on August 17, 2014.

So, we are left to watch the footage covered by Sanat on his handycam which he often shares with the friends he makes along the journey till the handycam goes kaput when he reaches Benares. Chakrabarti’s team had to go there, locate him, bring back the camera, repair it and take it back to him again. All this interestingly becomes an integral part of the film as this is captured on camera and inserted into the film. Das then went on his journey.

We journey along with him, meet different people from different regions, who cheer him and befriend him and also feel proud about being photographed with an ordinary rickshawalla who is soon going to become an international celebrity.

The people he meets are real people – drivers, cleaners, tea-shopwallas, pilgrims, sadhus and so on who are not actors. They invest the film with an interesting texture while widening the canvas of the subject and its journey. Chakrabarti wanted to shoot the last leg of the journey herself, to get footage of the exotic Ladakh landscape.

“But we lost him in the Kargil-Dras area, as there was no telephone network. We looked for him, asking people about a rickshawala and they identified him as he was the only rickshawala there” she adds. She informs us that Films Division chipped in at the post-production stage.

This search for Das adds to the intrigue and adventure of the hero and his pursuers – Chakravarti and her two team mates and they finally meet after a long and arduous search.

In Kolkata, the camera closes in on the struggle of the director and her crew to gather funds without which it would have been impossible even to finish the film on which they began work in 2014 and was finally ready for screening in 2017. While the Ladakh trip had been funded by his local club, Das says he saves money to make these trips.

“My wife, who earns Rs.5,000 a month working as a maid, is very supportive. Whenever I leave, I leave behind some money for her and take some for myself. Once, I sold my cycle rickshaw and went on a 403-day tour on a cycle. Our standard of living is not very high so we can manage with little money.”

But his wife is far from happy this time when he left them behind as his she had no clue how to fund their daughter’s education in a good school so Minoo was not happy at all with the Leh and Ladakh experiment.

We see Das get off his seat on the rickshaw and push it himself with all his strength when the mountainous roads became too steep and narrow for him to be able to negotiate his way through by sitting on his rickshaw and driving it himself. The camera captures these scenes in long shots and mid-long shots trying to retain the natural colours of the environment.

“The roads were rough, and there was no way that I could carry my belongings on the rickshaw and cover the 8-km stretch. I would offload everything on the road drive the rickshaw for a few metres and return to carry the things on my shoulder. It took an entire day to cross that stretch, but I didn’t stop. I wanted to create a record of sorts by reaching Khardung La,” he says. “It was very tiring, and it took a lot of time. But the view of natural beauty you get there makes you forget everything else in life,” said Das.

At times, the rigours turn so hard that even the audience begins to feel that Sanat Das may not be able to reach the finishing point. But braving the biting cold he is not used to and without the necessary warm covers, Das goes on with his terrible adventure and by the time he reaches his destination, his name has reached ahead of him and he has become a celebrity already.

Says Chakravarti, “he undertook this journey to promote the cycle rickshaw as an eco-friendly means of transport and world peace, though one could guess that adventurers like him do not need that sort of motivation to undertake such sojourns. As many travellers will tell you, it is really all about the journey and not about any reward or recognition at the end of it.”

According to Chakravarti who is also on camera for almost half of the journey, along with her two friends, what stand out about Das are—"(a) his insatiable love for adventure, (b) incomparable endurance and courage to complete this perilous journey, and (c) that he shot his own footage on a handycam he had never handled before. Though Das had undertaken cycle rickshaw journeys to Puri (Odisha) and other destinations across North India earlier, a journey to Ladakh was always on his mind.”

It was possible for Das to undertake the venture by virtue of the fact that monetary and logistical assistance came from his neighbourhood club, the Naktala Agrani Sangha, Indrani, and his regular passengers.

The local club paid him a happy tribute with garlands and flowers and announcements but like Cinderella, once his trip was over and Sanat Das was back home with his much-weathered rickshaw, his life had not changed one bit. He is back to plying his rickshaw in and around the neighbourhood of Naktala.