NEW DELHI: A 100 farmers with “nothing now left to lose” have travelled all the way from the Cauvery Delta districts of Tamil Nadu to New Delhi, desperate,distressed but determined to get justice. They have all seen farmers known to them commit suicide, and all are now talking in the same vein even as they hope that they will be listened to, and their grievances met.

These men and women reached Delhi a week ago and started walking straight to the Prime Ministers residence on Race Course Road to communicate their woes and submit their demands . They were blocked by the cops, ushered into police vans, and brought to Jantar Mantar---the designated site for protests in the capital---where they have been sitting since.

The farmers have been using different symbols to emphasise their condition, their demands, and their rights. On the second day of the protest, they carried begging bowls as a symbol of their state today in drought hit Tamil Nadu---that of having been reduced to beggars. On the third day, the farmers bare chested sat with Namam (cheated one) drawn all over their bodies.

Few farmers sat with human skulls strung together to focus attention on the suicide of farmers. A farmer climbed a tree close to the protest venue, threatening to commit suicide but the police and the fire department intervened to stop this. The long spell of drought has resulted in acute agrarian distress, leading the farmers to take the long journey to the capital. Today they are all talking of suicide, even hinting at the possibility of mass suicide if their demands are not met.

Murugan,37, a farmer from village MulliPatti of Sri Rangam Taluk in ThiruchiraPalli district says,he has no water to irrigate his four acres, either from the river or a well. His cultivated crops have dried. “I could not pay back the loans to the bank and I am under tremendous pressure,” he says, visibly worried.

Shiva Kumar, 45,from village Kalvirayan Pettai from Thanjavur district says, “I have been jobless as I could not cultivate my land because of the water crisis. I mortgaged the family jewels against crop loans at the bank. But I could not pay back the loans and have lost everything.”

A woman farmer Sellammal, 45, from village Thandalai Puthur of Musiri Taluk in ThiruchiraPalli district, says, “my family is in distress and on the verge of committing suicide. We have lost everything, and are not able to pay back our loans.” 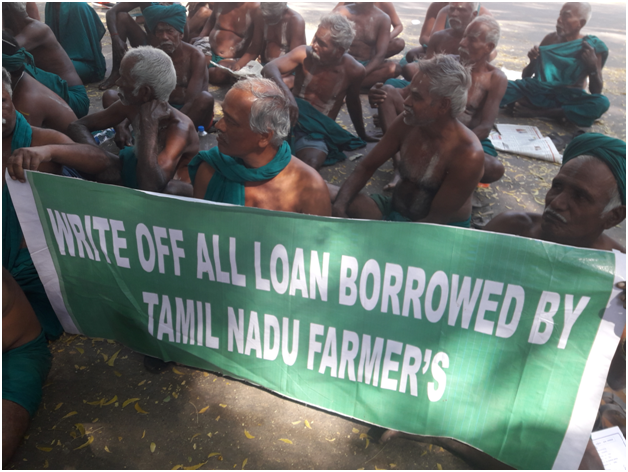 KaliyaPerumal,62, from village Pothuravuthan Patti of Krishnaraya Puram Taluk of Karur district says, “ I have been jobless and have nothing to do. I only know farming but there is no water. I feel depressed and feel mental pressure all the time.”

Drought, and lopsided economics has pushed agriculture to a standstill in one of the most developed states of India. The volatile political situation in Tamil Nadu also ensured that the concerns of the farmers was disregarded, despite their many protests in different parts of the state. The TN government spoke of drought relief measures as tokenism, and has done little on the ground to alleviate the agrarian distress.

P. AyyaKannu, president of South Indian River Linkage Association, told The Citizen that the farmers are being neglected by the ruling establishments, both at the centre or state. “The farmers are facing huge challenges and finding it difficult to continue with agriculture as an occupation.The central government has waived the various loans for the Indian capitalists to the tune of Rs five lakh crores. In contrast, the 80 crore farmers of India have loans of only Rs.72, 000 crores. Why is the government so reluctant to waive off these loans? In Tamil Nadu alone, there were 400 deaths of farmers in the last few months due to the pressure from the banks to pay off the loans,” he said.

Besides drought like conditions and paucity of water in the reservoirs, the flourishing agriculture in Tamil Nadu is being threatend also by rampant sand quarrying from the rivers in connivance with the ruling political establishments by private players. Sprawling urbanisation has also led to the shrinkage of traditional water bodies that have further hit the agrarian section.

The farmers are currrently agitating against corporate projects of Gas and Hydro Carbon across the state. For the farmers it is a question now of survival, with the distress apparent on the faces of those who have carried their protest and their demands to New Delhi.