When A Journalists Pen Becomes An Assassins Gun

NEW DELHI: Assassins are hired killers who are contracted to eliminate political adversaries, business adversaries etc. Assassins cost a lot of money and if the assassination plot ever gets exposed, the person who has hired is liable to criminal prosecution. To avoid the inherent risks, instead of an assassin, one can hire a journalist instead. They can use their pen to finish off your reputation and credibility to an extent that no bloodshed is required.

On Feb 16th, 2016, NewX declared that according to IB reports, JNU student Umar Khalid is a sympathiser of the Jaish-e-Mohammed terrorist group. The following day, Hindu carried an article in which Government denied any such IB report. On December 10, 2005, one Mohammed Rafiq Shah was declared as the 29/10 Delhi blast bomber by Hindustan Times. He was acquitted 12 years later on 16th February 2017. There are countless other such incidents when a journalist’s pen has been used as an assassin’s gun, without the bloodshed.

The latest victim of journalistic assassination is Najeeb Ahmed, the JNU student who disappeared from the campus on 15th October, 2016, after an altercation with some members of ABVP, the RSS student body. On 21st March, 2017, Najeeb Ahmed was declared as an ISIS sympathiser on the front page of Times of India. The text of the report was as follows:

Police have received a report on the browsing history of missing JNU student Najeeb Ahmed, which reveals that he had been looking for information on the so-called Islamic State’s ideology, executions and network in the months preceding his disappearance, reports Rajshekhar Jha.

Police sources claimed most YouTube videos he watched on his laptop were related to IS. These details, which open another line of probe, have been submitted in the high court.

In addition to the 70-word introductory blurb on the front page, a 500-word report on page 3 elaborated further as to how Najeeb used to watch ISIS videos and was possibly a sympathiser.

This was followed by a number of major TV news channels carrying the same report. Here’s one by Times Now.

Finally, the news came that all these reports are bogus and that no such police report exists of the browsing history of Najeeb’s laptop.

Here’s the video of the press conference by Delhi Police in which they said that no link has been found between Najeeb and ISIS.

However, by this time, the right-wingers had picked up the news and were circulating via their Twitter accounts and scores of websites that they run. Here’s BJP’s IT cell head tweeting the same news.

While Times of India declared Najeeb as a sympathiser over 570 words on Page 1 and Page 3, they put a 75 word clarification on Page 5 today (22nd March) stating that Delhi Police has claimed that no such report exists.


The author of the article, Raj Shekhar Jha tried defending himself on Twitter. However, he ended up deleting many of his tweets. Here are some of his deleted tweets. 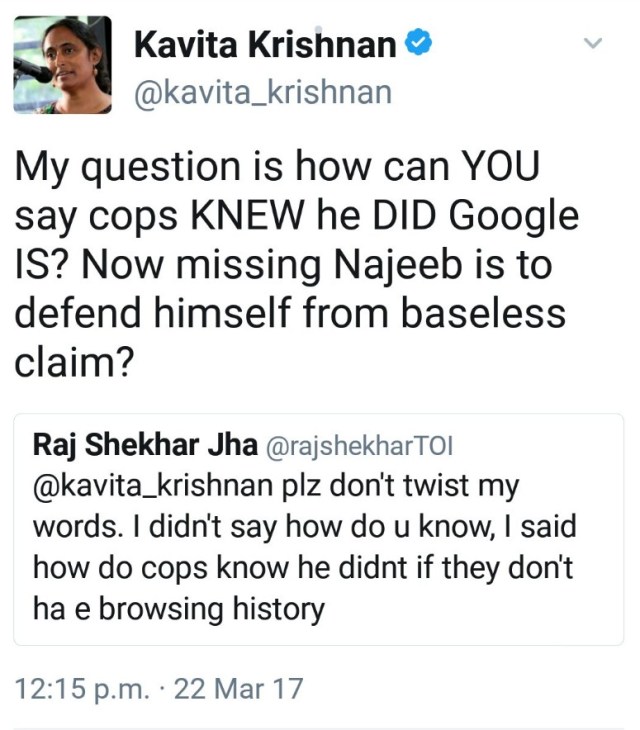