NEW DELHI: A long struggle for land rights and natural resources, during which he faced threats to his life, he was called a “Maoist” and of course an anti-national, cases were registered against him one after the other, social activist Prafulla Samantara has got international recognition as one of the six winners of the Goldman Environmental Prize, San Francisco, United States.

The prize citation is for his “...historic 12-year legal battle that affirmed the indigenous Dongria Kondh’s land rights and protected the Niyamgiri Hills from a massive, open-pit aluminum ore mine."

This prize comes within a year of a kidnap bid that failed. Samantara has been facing severe threats during his fight for his justice. In his own words:

“On April 6, 2016, I was returning from village Masiput of Koraput district attending a meeting of people belonging to five villages who have been opposed to mining on a small hill named Dangadeula on which the villagers depend for domestic animal feed, clean water from streams and also fuel for kitchen.

While I was on my way, 10 young goons, allegedly hired by Vedanta Company tried to kidnap me and take me away essentially to prevent me from attending meetings with villagers all opposed to mining by Vedanta. Meanwhile the villagers, after getting information, rushed to the spot and the goons freed me to go.

Again, the same afternoon, some musclemen, known to be involved in antisocial activities came to my room in a hotel in Koraput and threatened me. They warned me against support and solidarity to the local people who have been resisting destructive mining of bauxite on the Dangadeula hill. I firmly replied that force could not stop me from my active support and solidarity to the people who were once displaced by the Upper Kolab reserviour. The bauxite mining will not only destroy homes and livelihood but will impact on local water streams that will dry up, impacting –not just polluting – the quantity of water in the Kolab reservoir. 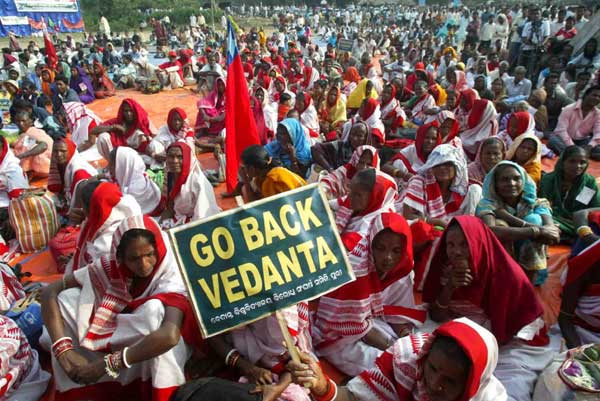 I have observed that in many districts of Odisha where my work takes me and where bauxite ore is available, there are repeated attempts from what I believe is the Vedanta Company –and their hired men – to launch attacks on me, physically. This is nothing but a criminalisation of the corporate regime.

This is the fourth time that Vedanta has attempted a physical attack on me and other friends. Meanwhile the government of Odisha is trying to go in for mining in the Niyamgiri Hills, even after the Gram Sabhas of the Donguria tribals had rejected mining after the historical judgement of the Supreme Court in 2013. Simultaneously, police repression is also increasing every day in the Niyamgiri Hills by which innocent tribals who resist Vedanta Company being victimized and even detained and arrested on false charges. There have been even instances of some extra judicial killings.

Each time I have meeting to attend meetings with tribals and their supporters in towns like Bhawanipatna, Koraput, Rayagada, the company’s hired goons and some agents are using intimidation -- threats ---to conspire to attack me physically. Some top police officers have also been involved in vicious propaganda against me in a bid to mislead other local activists with baseless allegations that I am a Maoist!

This is ridiculous as I take inspiration from the ideology of democratic socialism with ideals Mahatma Gandhi, Dr. Rammanohar Lohia, Jayprakash Narayan and Dr. Baba Saheb Ambedkar. The intention of police officers is to pressurize local activists and populations not to be associated with anti corporate struggle.

This is a cruel example of criminalisation of the police administration for private, corporate profits at the cost of democratic values and constitutional right to life and livelihood.”

The annual prize honours grassroot environmentalists, who undergo risk to their lives, to protect the environment and empower those who have most to lose from industrial projects threatening their traditional livelihood. Since 1990 when the awards were first instituted, five Indians — Medha Patkar, M.C. Mehta, Rasheeda Bi, Champaran Shukla and Ramesh Agrawal — have won the prize. Samantra will be the sixth.