NEW DELHI: At a time when civic polls have been brought to the level of state elections by an over-exuberant media, West Bengal seems to have given a go by to the Bharatiya Janata Party by reposing full trust in Mamata Banerjee and the ruling Trinamool Congress. Of the seven civic municipalities the Trinamool Congress has won three in the plains, and in an unprecedented result, one in the hills. The remaining three in the hills have been won by Gorkha Janmukti Morcha.

Shortly after BJP President Amit Shah sounded the bugle in the state, urging his party to prepare for victory in the next general elections, Mamata Banerjee romped home in four of the seven municipal corporations. In an unprecedented resultthe Trinamool Congress grabbed the Mirik civic body in a first time victory for a non-Gorkha party in the hills. In Darjeeling, Kurseong, Kalimpong and Mirik the election was billed as Bengal vs Gorkhaland, but Mirik surprised GJM by voting in full support for the TMC. Banerjee responded to the results with , “the hills are smiling…” saying this heralds a new era in the hills where voters have for 30 years kept out what are considered the ‘plains parties.’

West Bengal, if the civic polls can be taken as an indication as was the case in Delhi recently, has reposed trust in Banerjee currently under attack from the BJP. Her senior MPs , Ministers and members have been booked and arrested by the Central Bureau of Investigation in the Narada scam, with the TMC feeling the heat after the Chief Minister took a strong stand against the BJP and Prime Minister Narendra Modi in Parliament and outside.

The civic elections, thus, have come as a major assurance for the CM and her beleaguered party. Significantly, the BJP, Congress and the Left have all come together to attack Banerjee for winning through violence in the recent elections. CPI(M) general secretary Sitaram Yechury called it a “a mockety of democracy and blatant misuse of state machinery.” A petition by the Congress to cancel the civic poll results was thrown out by the Calcutta courts. The BJP has blamed the Trinamool for the violence.

An indication that all was not well, came earlier in May when two BJP tribals Shah lunched with, joined Banerjee soon after. He had kicked off his West Bengal visit, flushed with the Uttar Pradesh victory, with a lunch at the household of Raju and Geeta Mahali. He was reported in the local media as saying, "I may have addressed several rallies across the country, but let me tell you nothing is more satisfying than today's meeting in this tiny village in Bengal". However, just a week later the Mahali’s living under the Naxalbari police station area joined the Trinamool Congress. The BJP of course, insisted that they had been abducted, but the TMC read out a statement from the couple saying they had joined the party without any pressure. 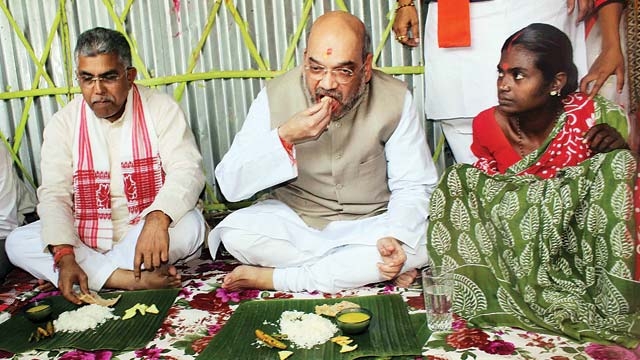 The Delhi media virtually delivered a 2019 victory script for the BJP during Shah’s visit to West Bengal, playing on his “Mission Bengal” inaugurated with the lunch at the Mahali home. The civic election results have demonstrated clearly that Banerjee retains a hold on the grassroots, and is expanding now into the hills. Not just this, but the results have also defied the popular wisdom that the wanign Congress is being replaced by the BJP in the state. Quite the opposite really if the civic bodies results are anything to go by as the TMC has won in the Congress strongholds as well.