Wake Up Calls to the "Conscience of India": Widow Rashidabi Shows the Way

NEW DELHI: ”He did not die the death of a cat or a dog for money to be given to us in place of justice,” said Rashidabi, the widow of Zafar Khan brutally lynched by a mob of municipality employees in Pratapgarh, Rajasthan just about two weeks ago on June 17. Not a single person has been arrested for the crime, with the government trying to silence the grieving family by offering Rs 2 lakh compensation, and a job for a member of the family.

Zafar Khan, a local worker, had rushed to the rescue of a small group of women who were being harassed by the civic employees for defecating in the open. Eyewitnesses said that these employees had started haunting he women of Bagwasa Kachi Basti for the past five or six days before Khan’s death, abusing them, twisting their hands, taking away their water, and photographing them. Khan intervened on that fateful day when he heard the women tell the men not to to take their photographs. Incidentally, for the record the group of women were a representative sample of the different communities living in the area.

Khan’s little 14 year old daughter picks up the phone, and valiantly struggles to answer some questions. She had rushed to the spot where her father was being beaten up, only to be told by one of the assailants that he would burn her father to death, that he would clobber her mother, that he would pick her up. Terrified, she stuck her ground, and today is her mothers greatest support. Her elder sister, the only other child of the family, was married earlier.

Rashidabi said that the women could not use the toilet that had been constructed as there was no water, it was absolutely filthy, and often the civic employees would charge money ranging from Rs 5 to Rs 10 per use. She said the stench was overpowering and the women had no option but to use the fields instead. She said she was at home when she heard her husband had been attacked, and she went rushing to find that he was being kicked straight in the stomach, and fell down soon after, dizzy and unable to withstand the blows any longer. He died soon after. The civic employees of course, left after their task was completed without a second glance at the man they had so brutally attacked.

The video below captures a march today in Pratapgarh led by women of all communities to protest against the lynching of Zafar Khan, with the demand for the immediate arrest of the assailants:

Zafar Khan was a very popular man in the area, and this came from his own personality although he was also a CPI(M-L) member. The party has taken up his death, with a huge campaign being started for justice, and against cow mobs, in the Pratapgarh belt that culminated in a March in which all sections of society participated today. (See Video and photographs) The main demand, the activists told The Citizen, was for the arrests of the guilty, and to convert the kucha basti into a pucca dwelling. Khan had been agitating for the same, as well as for toilets taking several representations and petitions from the dwellers to the various officials in the administration.

Rashidabi recalls that he often came back dejected,as either his petition had been torn and thrown aside in front of him by an official, or he had been threatened that the entire basti would be mowed down and he could forget his demands. However, he never gave up and in his commitment and determination lies the story of sheer courage that often accompanies such tragedies. His comrades who are currently campaigning for justice in his name, said they had never seen such widespread support as for Khan in all communities. Particularly the women who have now come out in numbers to organise meetings, and join the campaign for justice. 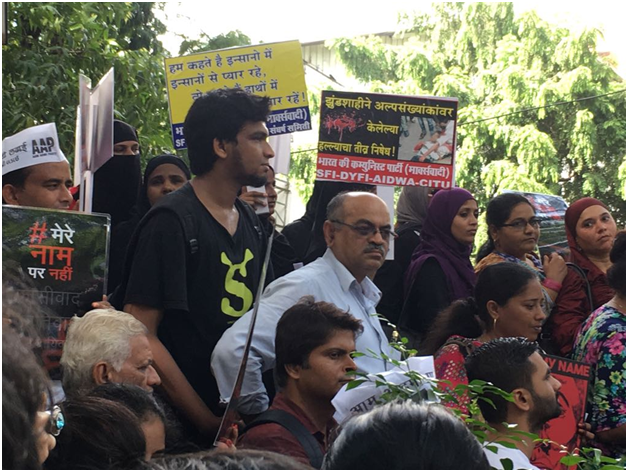 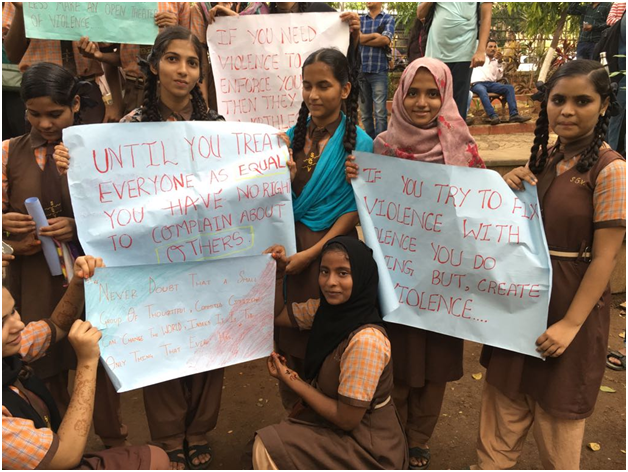 Schoolgirls at the Mumbai protest, they came all the way from Govandi

The March is one of the man protests that have overtaken India over the past few weeks against the lynchings, and the brutality being exhibited by the right wing mobs. As we write a major demonstration is underway in Mumbai with a statement issued by a multitude of individuals, political outfits and civil rights organisations maintaining, “the brutalization of this country is creating a generation that does not think violence against the weak and helpless is wrong. Everywhere minorities are under threat. But what is physically dangerous for the minority is mentally dangerous for the majority.

This is not the future we want. We are Hindus, Muslims, Christians and people of all denominations, castes and creeds including some who have no religion. We do not believe that the present regime will stop the destruction of the secular, democratic India promised to us by our Constitution. So this is not an appeal to government. It is a wake up call to the conscience of the country.”

(Cover Photograph: Big demonstration led by women of all communities against the lynching of Zafar Khan by civic employees in Pratapgarh, Rajasthan)