ITANAGAR: Charles Dickens’ classic novel, A Tale of Two Cities, juxtaposed the contradictory political ambience that engulfed 18th century Europe and opens with the famous lines, “It was the best of times, it was the worst of times”.

Fast-forward to the 21st century and far removed from a divided Europe, no other lines could have better encapsulated the mood on Monday at the Arunachal Pradesh capital, Itanagar. And no two acts performed on the same day to mark the same event could have been more contradictory to each other as they were on Monday.

Monday marked a year since Pema Khandu officially took charge of the chief minister’s role. To celebrate his first 365 days in office, an official event was held at the State Banquet Hall at the Niti Vihar area, home to Arunachal Pradesh’s political elite, where a number of welfare schemes were launched for the benefit of citizens in the presence of sharply dressed ministers and bureaucrats.

A few kilometres downhill at the tennis courts premises of the Indira Gandhi Park, where no one seems to have played tennis for the past two decades and is the state’s designated protest site ala Jantar Mantar, another set of people were gathered to mark the same 365 days; albeit with a vastly different agenda.

Last year on August 9 when Kalikho Pul’s body was found hanging from the ceiling fan in one of the rooms of the chief minister’s bungalow-turned-guest house, people were outraged.

After a year of power-struggle and internal bickering, many felt that Pul was dropped like a hot potato by MLAs who had supported him earlier. That anger translated in a violent outburst as some people blamed a section of the MLAs for Pul’s suicide, claiming that they lifted him on a pedestal and pulled the rug from under his feet. The notes that Pul allegedly wrote and left behind- ‘Mere Vichaar’- certainly seem to suggest that he too felt the same way. 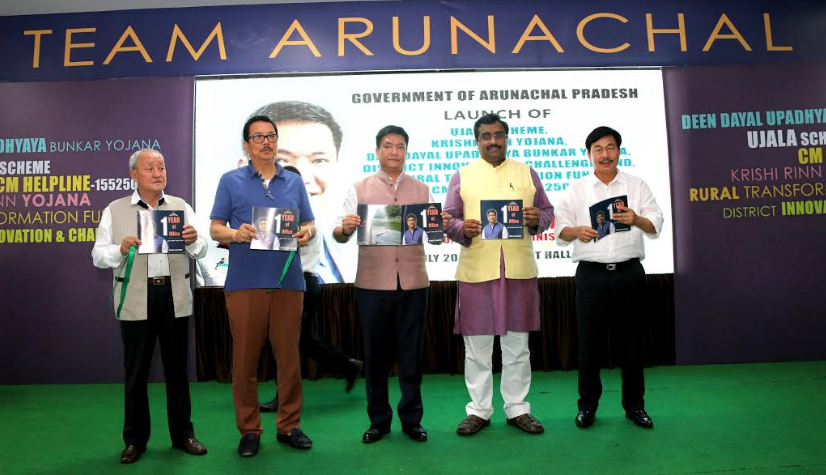 After the notes were made public, his family demanded a thorough investigation into the allegations that were levelled against top politicians and judges. A group of citizens even formed the eponymously-inspired ‘Mere Vichaar Andolan Committee’ (MVAC), to seemingly seek justice for Pul and his family. It was members from the MVAC who marked Monday as a ‘Black Day’.

Dressed less formally than those in the Banquet Hall in blue denims, seated on bright green carpets laid on the floor of the tennis courts under the sweltering sun, the men and women gathered cried foul, condemned the day and sought Khandu’s resignation.

Large banners with letters in white font on black background read: Shame on the name who ruined states fame (sic). There were no portraits save for those of late Pul flanked by the MVAC’s logo on the top left and right corners of the banners, to remind people of the day the country’s youngest chief minister took his oath of office.

On the other hand, at the Banquet Hall, Khandu’s gleaming portraits were plastered all over. From promotional banners to standees to visual slides, this too was an event to remind people of the day the country’s youngest chief minister took his oath of office.

While bulbs were lit to mark the launch of the UJALA scheme at the air-conditioned Banquet Hall, effigies of Khandu and other senior politicians were set fire to by the motley crew that made up the MVAC.

Whether these are mere coincidences or part of brilliant mind games is up for debate. The battle though began early Monday as was evident in some of the newspapers of the state. While the state government issued front half-page advertisements announcing the schemes that were launched, the MVAC issued full-page advertisements that carried Pul’s portrait merged against a black background calling 17 July 2016 a ‘Black Day’.

To paraphrase Dickens, for some July 17 2016 is the spring of hope, for some it is the winter of despair.