NEW DELHI: Various organisations have publicly demanded the release of Medha Patkar, who was picked up by police whilst on an indefinite hunger strike in Madhya Pradesh’s Dhar district.

The activist and 11 more people were protesting against the inadequate rehabilitation and resettlement of families affected by the Sardar Sarovar dam on the Narmada river. Patkar, who is being kept at a hospital in Indore, condemned police action. “Today after 12 days, the government replied by arresting 12 of us. This is not how you reply to a non-violent struggle … Under the rule of Modi and Shivraj, no dialogue with us … just gimmickry of figures and use of force,” she said in an audio clip uploaded to social media.

Activists say that police are not allowing anyone to stay with Patkar at Indore Bombay Hospital, where she currently is. The others are being held in Dhar.

Since then, about 12 people have continued the hunger strike at Chikhalda. A petition has been submitted to the National Human Rights Commission, asking for strict action against the violence of police officials and others involved. A representation has been made to the Indian Ambassadors in Rome and Harare, and another to the UN Rapporteur on Housing.

Protests have taken place across the country. 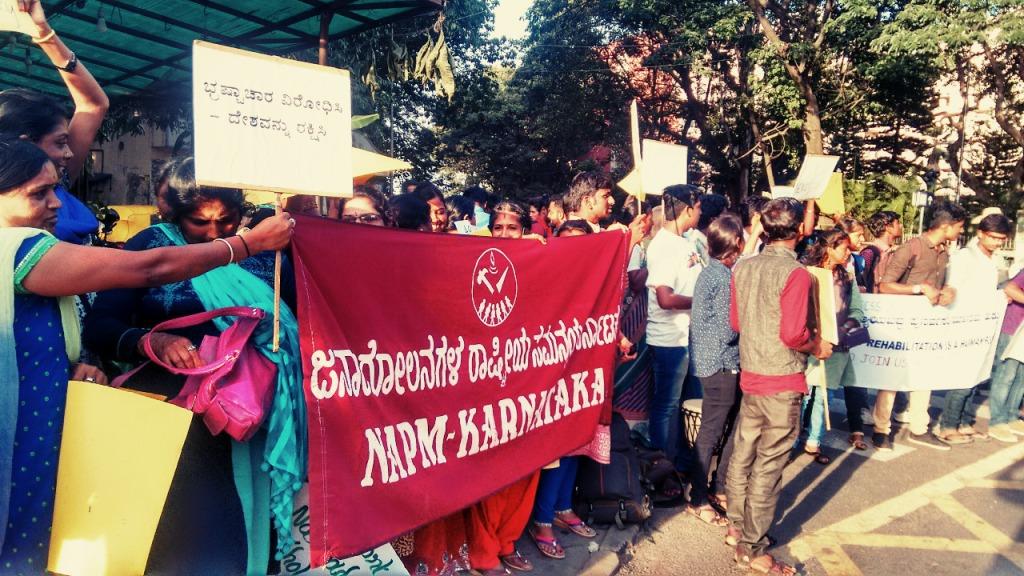 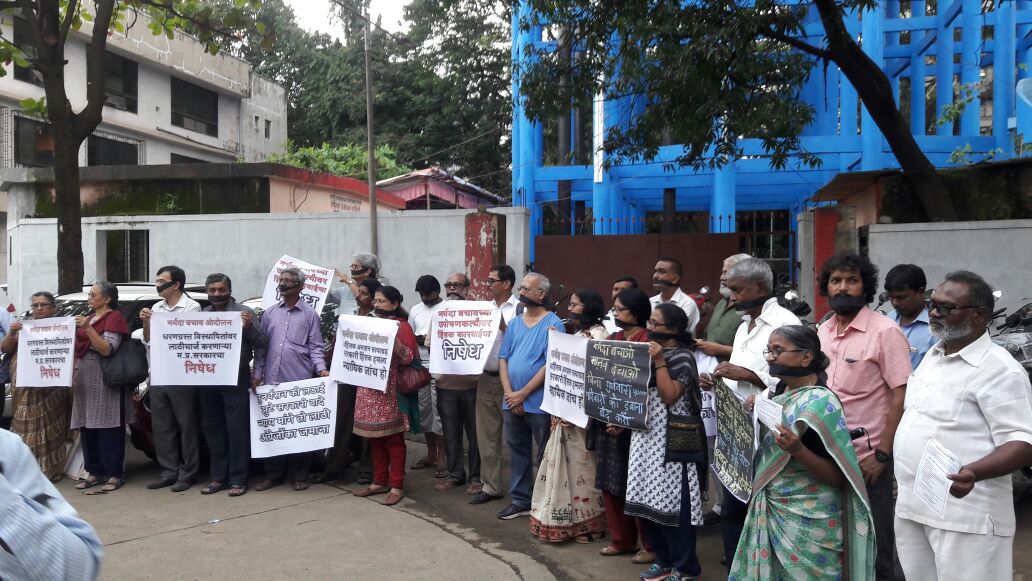 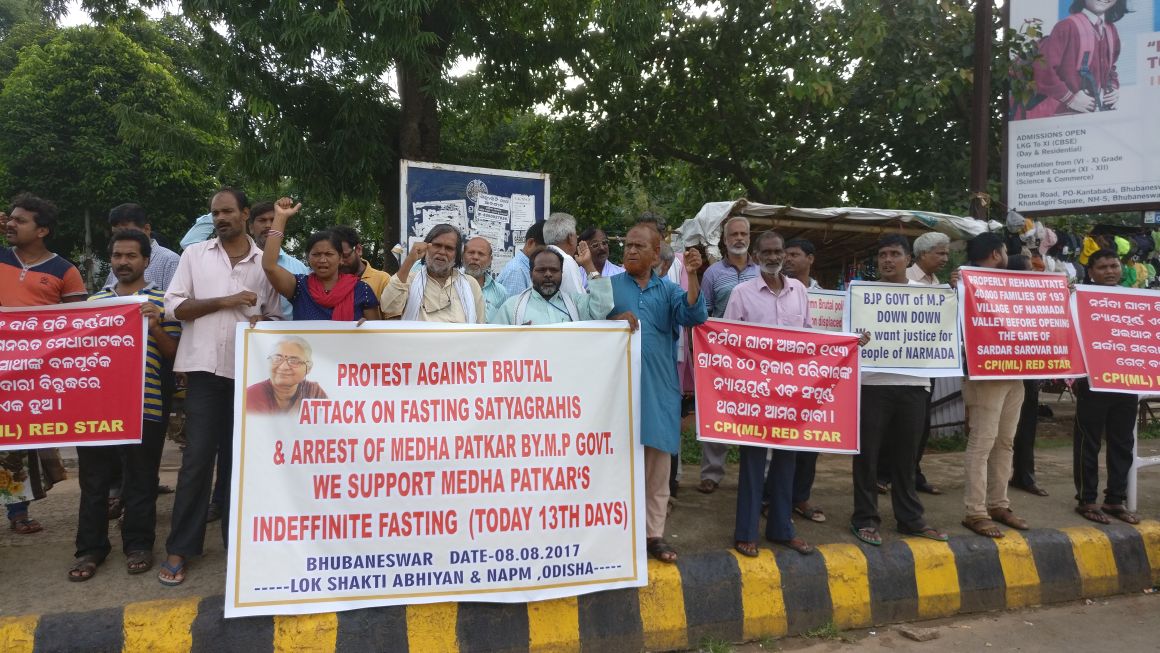 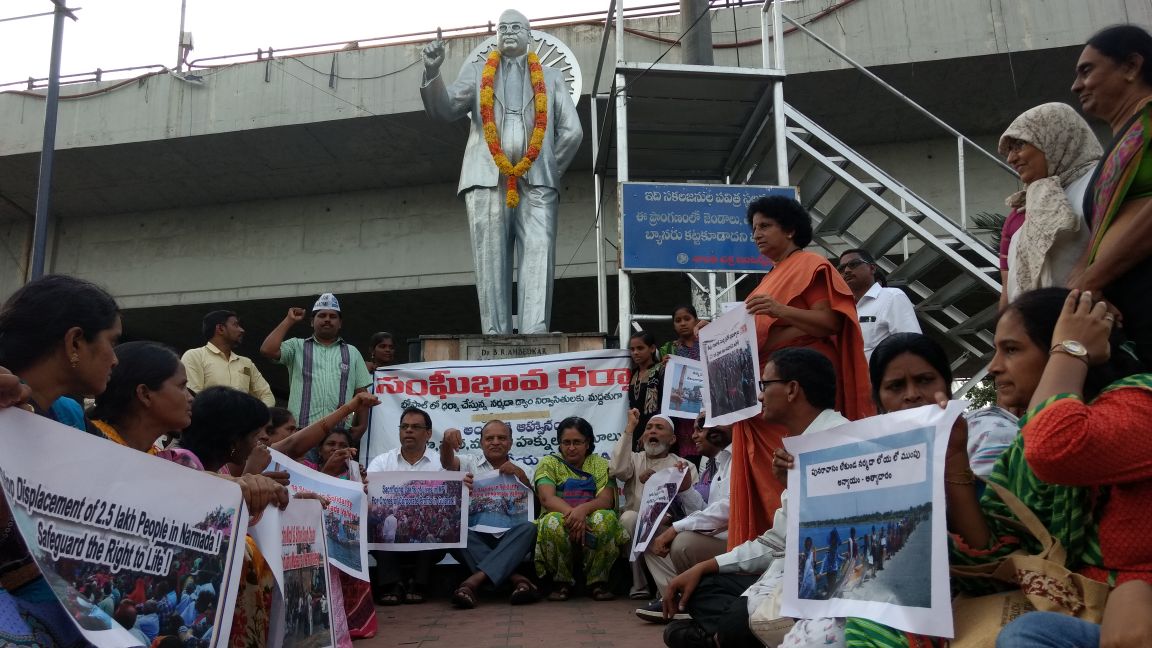 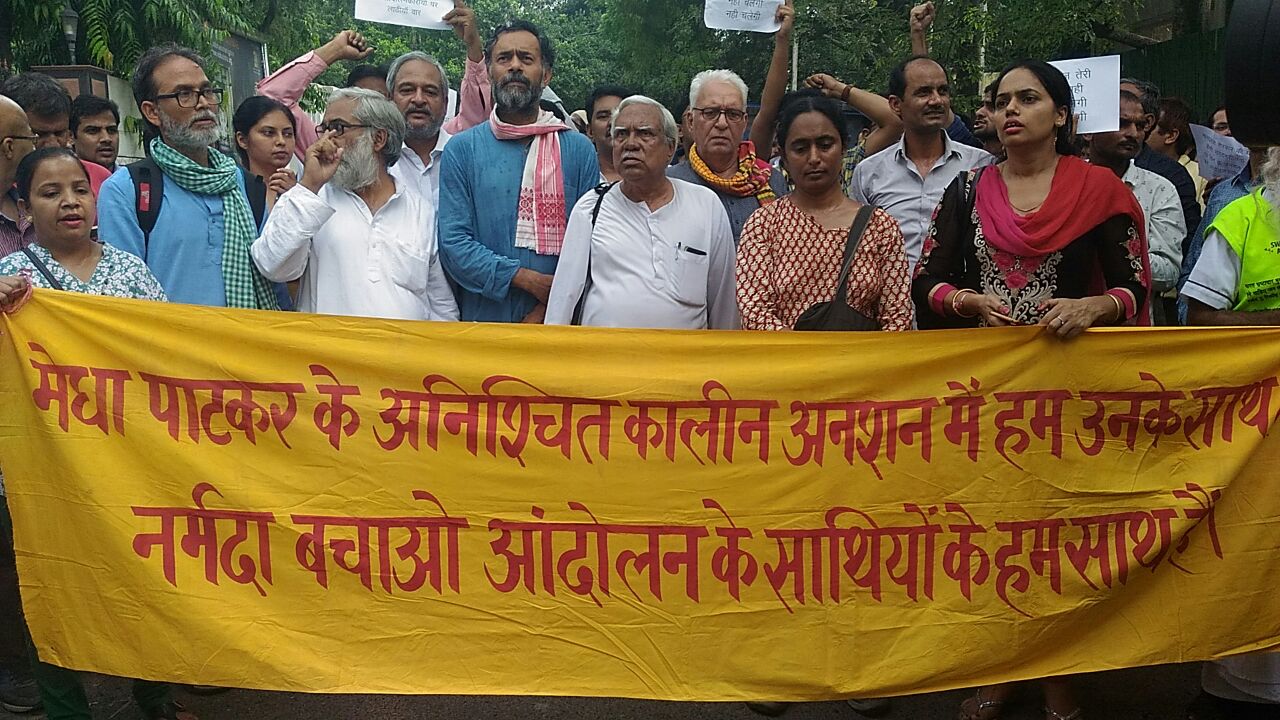 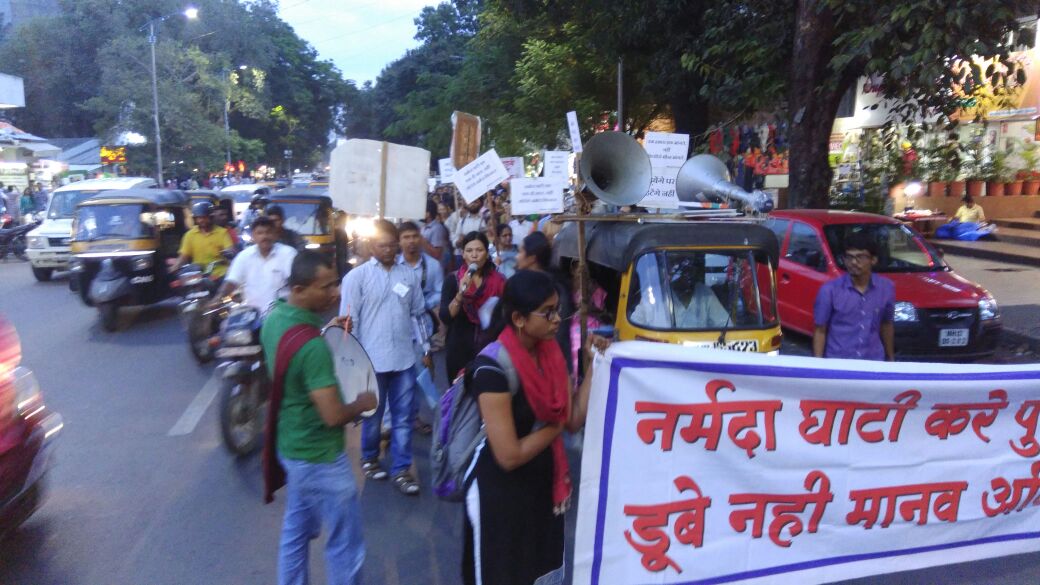 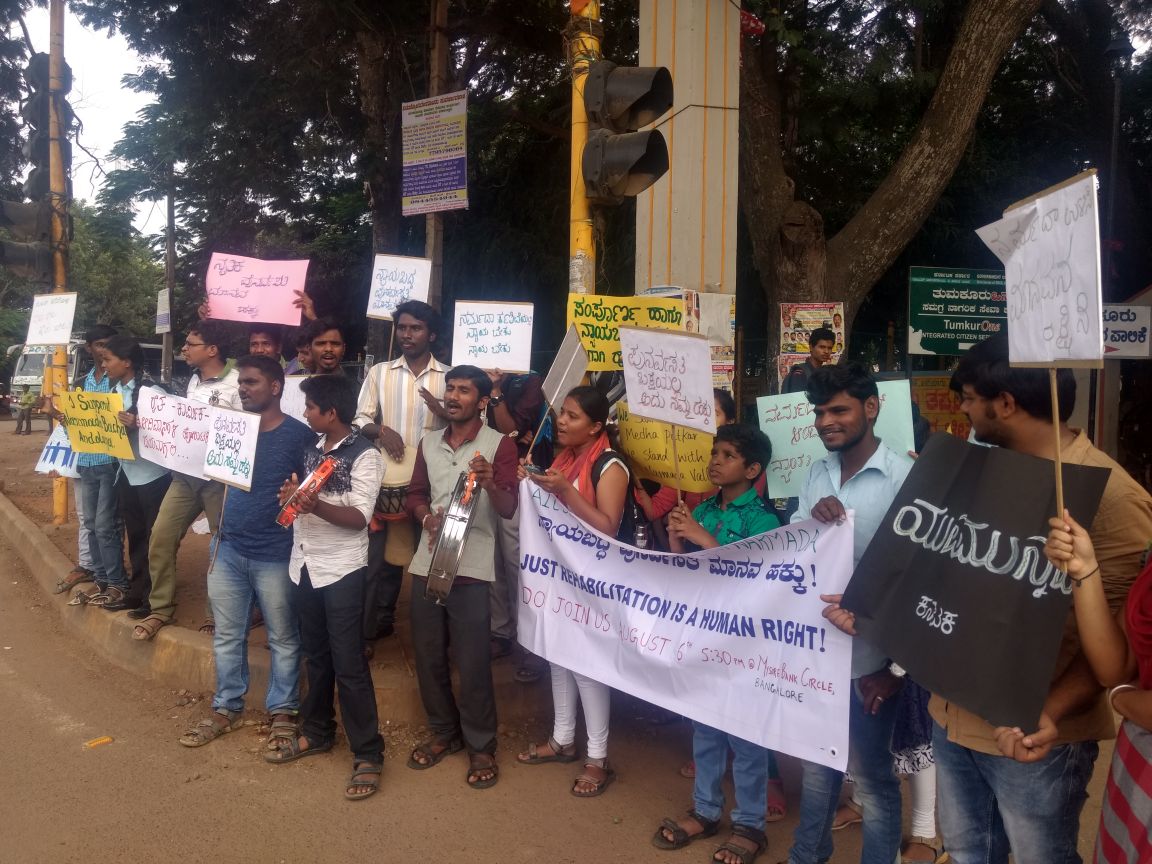 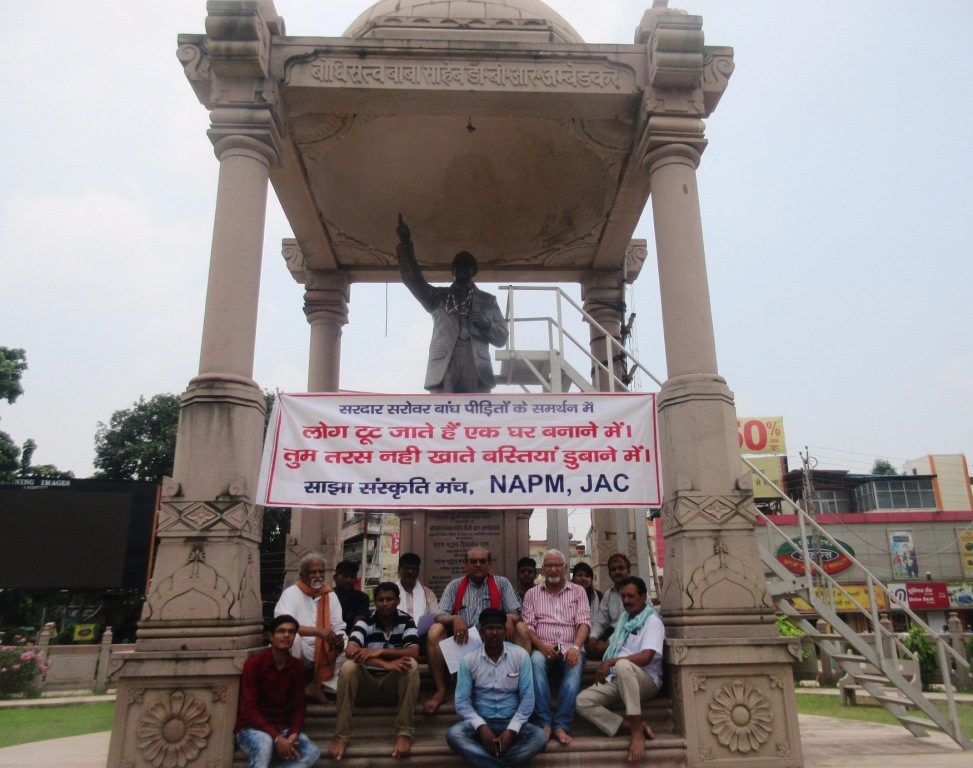 Activists say that the Shivraj Singh Government is “lying in the name of showing concern for health of fasting people, whereas illegally detained them and not allowed anyone to stay with them.”

An emailed statement from National Alliance of People's Movements (NAMP) reads as follows:

“Today people across the country protested against the high handed action of MP Police of the Dhar and Badwani administration which used excessive force leaving 48 people injured, some of them were admitted to ICU in Badwani.

In Delhi, more than 50 protestors marched to the MP Bhavan and submitted the memorandum demanding immediate release of all the people from the hospital and allow them to discuss their next course of action. Also take action against the District Magistrate, SP and other officials responsible for the high handedness of the Police forces and initiate dialogue with the Narmada Bachao Andolan and solve the problems of the 40000 Saradar Sarovar Dam affected families. With this, a delegation of Hannan Mollah (former MP), Yogendra Yadav (Swaraj Abhiyaan), Kavita Krishnan (AIPWA), Satyavan Ji (AIKKMS), Manimala Ji and Snehlata Shukla (DSG) submitted the memorandum to the Deputy Resident Commissioner and Joint Resident Commissioner under signed by more than 30 representatives of people’s organization. Shabnam Hashmi (ANHAD), Rajendra Ravi (NAPM), Sandeep Pandey (Socialist Party of India), Faisal Khan (Khudai Khidmatgar), Bhupendra Singh Rawat (Jan Sangharsh Vahini), Ramesh Sharma (SUCI (C)) and many others were part of the protest.

Madhuresh Kumar, National Convener, NAPM gave a brief account of yesterday incident and said that the Govt. have used these violent tactics before but we will keep our fight on. Since yesterday Medha Patkar and others admitted in Indore and Dhar hospitals respectively, with limited access. The Govt. has maintained that they are concerned about their health and they are only hospitalized. If they are hospitalized then shouldn’t they be treated like a normal patient with visitation rights by their colleagues, friends and, family? Govt. claim that they are concerned about their health would have meant that, all 12 should have been kept in the same hospital at least, but no, 9 of them are in Dhar district hospital and two Rukmani Bahan and Bhagwati Bahan were left at the Dharna site itself where they continue to fast.

Yogendra Yadav, expressed a serious concern and said that the we are asking very basic things, rehabilitation of all the affected people and on the issues, MP Govt. is lying all over and using forces on peaceful protestors. The movement has exposed the development model and given us courage to ask what development means for us?

Sandeep Pandey said that Govt. is not acting for the benefits of the people but as Gujarat Govt. destroyed the Sabarmati River, now the MP Govt. and Govt. of India are doing the same with people of Narmada Valley.

Kavita Krishnan extended her full solidarity to the people of Narmada Valley and said that she believes that the movement will fight out the atrocious govt and win the battle for the rights of people.

Satyavan Ji, Bhupendra Singh Rawat and many others also extended their solidarity to the Narmada Bachao Andolan and the people and asked strict actions against the brutal attack on the people happened yesterday evening.

We believe the whole use of force was to break their peaceful protest and there was no concern for their well being, otherwise Govt would have initiated dialogue much before this. Shivraj Singh’s claim to be a sensitive CM but it is not visible in your actions. Words don’t mean anything to us. We condemn the high handed action of police forces who came with baton fixed with nails. This is a serious violation of human rights of the people sitting on peaceful fast fighting against the illegal drowning of more than 40000 families in Narmada Valley.

Series of action protest demonstration all over the country and internationally:

3. Representation made to UN Rapporteur on Housing

5. Tumkur, Karnataka : Protest demonstration by people of various organisations in support of NBA.

7. Pune, Maharashtra : Rally by people in support to NBA by Lokayat, Rashtriya Seva Dal and other supporters.

8. Bhopal, Madhya Pradesh : Silent Protest and Human Chain by sensitive people against the brutal attack of police forces on people of Narmada Valley.

9. Varanasi, Uttar Pradesh : Solidarity fast against the arrest of Medha Patkar and people of Narmada Valley by NAPM and Joint Action committee, Varanasi.

11. Chikhalda, Dhar, Madhya Pradesh : Protest by students of Salsabeel Green School against arrest of Medha Patkar and others.”