There was commotion in Times Now studio when a panelist raised concerns about the relevance of debating on Vande Mataram on a day when 30 kids died in Gorakhpur. The BJP spokesperson Sambit Patra tried to calm down Ghanshyam Tiwari by saying, “This is an issue that is very sensitive but for God’s sake, we are debating about an issue that is also equally sensitive, ie. Vande Mataram…” The cries of “It is not, it is not, nothing can be more important…” got lost in the chaos that followed.

The anchor, Navika Kumar tried to bring in order saying, “We understand that today is a sad day because 30 children have lost their life in Gorakhpur in a hospital because of certain conditions of lack of oxygen supply, we understand that. Let us not beat our chests in a manner as if something like this has never happened in Akhilesh Yadav’s time. When the debate is on Vande Mataram you are bringing up this issue because you are running away from the real issue.”

Welcome to the world on Indian TV news channels where the news of children losing their life is just another distraction from the “real” issue. A world where “real” issues are decided by the decibel level of the argument.

The news of death of children in a Gorakhpur hospital shocked the nation. This was more than a disease outbreak. The deaths were reportedly due to cutting off of oxygen supply due to non-payment to the vendor. One would expect this to be the biggest story of the day. Let us see the coverage of the Gorakhpur tragedy on twitter timelines of the leading Indian English language news channels.

Here is a list of the prominent hashtags on Aug 11th, the day the news of the tragedy broke out and the number of tweets on each by Times Now and Republic:

While the crony channels were busy with the song, the tragedy got more attention from CNN News18, India Today and NDTV on the first day. CNN News18 was among the first to tweet on the deaths after ANI broke the news and followed up with another story later in the day. India Today had seven tweets on the issue after the story broke out. It was also the first to tweet a video of the reaction of the UP Health minister on the deaths. NDTV too had four tweets and an article on the tragedy on the first day.

Times Now finally came up with its hashtag #StandWithOurChildren for Gorakhpur on the second day. In contrast to the usual hashtags of the channel, this was a neutral hashtags. Neither did it did not question anyone nor did it hold anyone responsible for the negligence. What a contrast it was to hashtags it used for the outbreak of dengue and chikanguniya in Delhi: #ChaltaHaiHospitals #AAPKahanHain #DelhiHealthScare #AAPDontCare #AAPKaSatya #KillerNegligence

The channel that aggressively questioned the Delhi government for absolving itself of responsibility and accused it of being arrogant and downplaying cases was now meekly standing on the sideline holding the placard of #StandWithOurChildren.

As outrage built up on social media, the channel spoke of Adityanath shirking responsibility but shied away from saying so in a hashtag.

Republic was not much different in its coverage. After a slow start on the day the news broke out, Republic finally came up with two hashtags in support from the second day onwards. After starting with a neutral hashtag of #GorakhpurTragedy, it finally took a stand with the hashtag, #GorakhpurCoverup. It is important to note that the cover-up hashtag did not name anyone.

“What is stopping the state from cracking the whip after the cover-up has been exposed” was the question asked by the channel. The carefully worded statement separated the State from the act of cover-up. It was the hospital that was being exposed, not the state government. This is once again in sharp contrast to the stand taken by the channel when it comes to questioning its favorite targets – the opposition leaders and liberals. 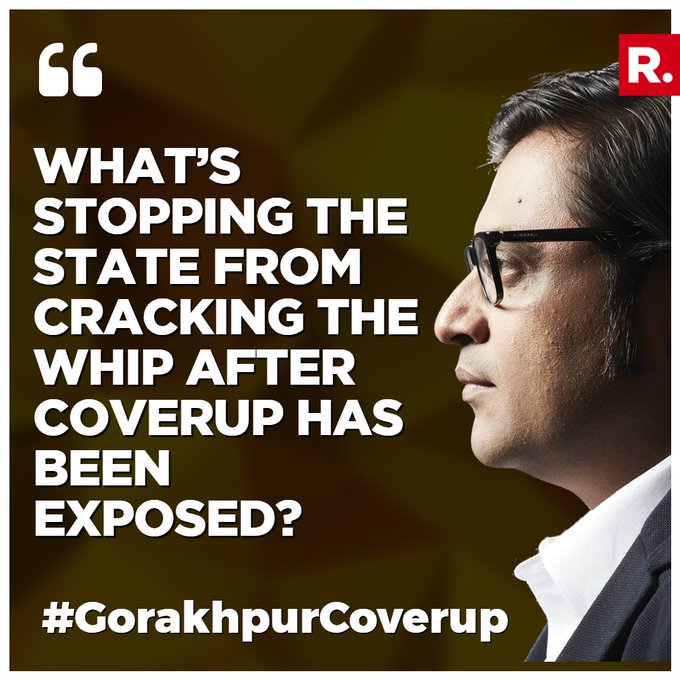 After the outrage over the tragedy exploded on the second day, so did the interest of the crony channels. Exclusives and Super Exclusives are now trying to cover up for the initial apathy and lack of interest in the story. As the country gets ready to celebrate 70 years of independence, one is left wondering what these channels consider to be “real” issues for the nation. One is also left wondering how hysterical the coverage and the hashtags would have been if this had happened in a non-BJP state.