#IStandWithNituparna: The Cartoon That Elicited a Death Threat

Rajbongshi drew a cartoon of PM Modi wearing an oxygen mask provided by the corporates, and hoisting the dead bodies of children killed in the Gorakhpur tragedy.

Anindya Pranay Bharati whose profile says he is a teacher at Goreswar College in Kamrup district wrote on Facebook threatening to shoot the cartoonist dead.

Rajbongshi has already lodged an FIR at Sarbhong police station at his hometown in Barpeta district and also written to the Assam Director General of police Mukesh Sahay. 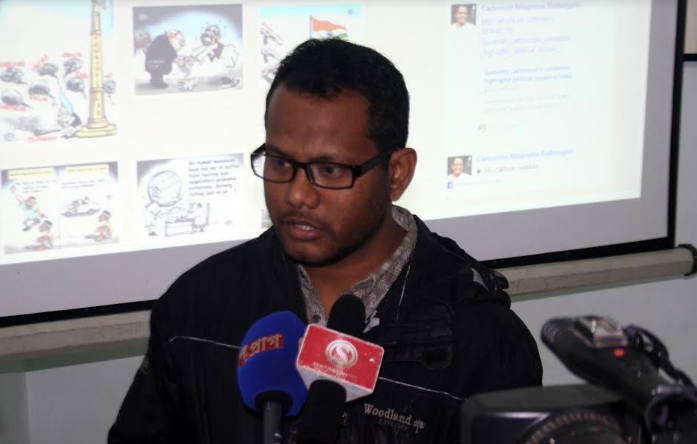 “There are many who criticize my work on Facebook or in other mediums. All are welcome but this guy who claims to be a teacher at a college said somebody should shoot me dead. So, I immediately informed the police. I’m thankful to my friends and fans for putting their weight behind me,” Rajbongshi who has been vocal against the Modi government told The Citizen.

Barpeta Superintendent of Police Shiladitya Chetia later said that all aspects will be investigated as it’s a sensitive issue.

Rajbongshi has drawn a series of cartoons lampooning the Modi government and also the Assam government.

“As an artist or as a common man I have been expressing my views. This is not the first time. I have criticized the governments through my work. My works express the voice of the voiceless,” said Rajbongshi.

Many condemned the threat as a conspiracy against the freedom of expression. “We strongly condemn the threat to shoot cartoonist Nituparna Rajbongshi by one of the visitors of his Facebook page. It is nothing but a desperate attempt to muzzle freedom of expression. When freedom of an artist comes under attack by such undemocratic forces it speaks volume of the prevailing situation,” said senior journalist Sushanta Talukdar.

A #IstandWithNituparna campaign has been started with the demand for speedy police action to nab the culprit.