NEW DELHI: The anonymous letter to then Prime Minister Atal Bihari Vajpayee alleging rape by Dera chief Gurmeet Ram Rahim Singh has finally been the man’s nemesis. He has been convicted by a court for the rape of the sadhvi who wrote the letter, lived in terror along with one other brave woman who came out with details of rape as well, even as at least one person was killed by unknown goons at the time for allegedly encouraging the woman to write the letter.

The letter penned in Hindi gives the horrific account of the rape, of the manner in which Singh was using the Dera to rape and assault women, and brings out the fear and sheer terror hounding the sadhvi and clearly her family. Despite this the two women who have brought an end hopefully to Singh’s filthy innings, stuck out the 15 years, appearing in the special court to record their statements. Small wonder they broke out in tears after the judgement was announced.

The English translation of the letter (in Hindi below as well) is as follows:

I am a girl hailing from Punjab State. I have been serving as a 'Sadhwi' in 'Dera Sacha Sauda', Sirsa (Haryana) for the last five years. Beside me, there are hundreds of other girls here, who serve for 18 hours daily. But we are sexually exploited here. The 'Dera Maharaj' Gurmit Singh rapes the girls in the 'dera'. I am a graduate. My family has blind faith in the 'Maharaj' (Gurmit Singh). It was at my family's bidding that I became a 'Sadhwi'. Two years after I became a 'Sadhwi', a special woman-disciple of Maharaj Gurmit Singh came to me one night at 10 o' clock and said that the Maharaj had summoned me to his room. I felt elated that Maharaj himself sent for me. I was going to him for the first time. After climbing the stairs, when I went into his room, I saw that he was holding a remote in his hand and was watching a blue film on the TV. Beside his pillow on the bed, lay a revolver. Seeing all this, I was frightened and became nervous. I had never imagined that Maharaj was a man of this type. Maharaj switched off the TV and seated me beside him. He offered me water and said that he had called me because he considered me very close to him. This was my first experience. Maharaj took me in his embrace and said that he loved me from the core of his heart. He also said that he wanted to make love with me. He told me that at the time of becoming his disciple, I had dedicated my wealth, body and soul to him and he had accepted my offering. When I objected he said, "There is no doubt that I am God." When I asked if God also indulges in such acts, he shot back:

1. Sri Krishna too was God and he had 360 'gopis' (milkmaids) with whom he enacted 'Prem lila' (love drama). Even then people regarded him as God. So there is nothing to be surprised at it.

3. I have considerable influence with governments also. Chief Ministers of Punjab and Haryana and central Ministers come to pay obeisance to me. Politicians take help from us. They cannot take any action against me. We will get the members of your family dismissed from govt. jobs and I will get them killed by my 'Sewadars' (servants). We will leave no evidence of their murder. You know that earlier also we got the 'dera' Manager Fakir Chand killed by goondas. His murder remains untraced till this day. The 'dera' has a daily income of one crore rupees with which we can buy leaders, police and the judges.

After this, the Maharaj raped me. The Maharaj has been doing this with me for the last three years. My turn comes after every 25-30 days. Now I have learnt that before me too, the Maharaj had been raping the girls he had summoned. Most of these women are now 35 to 40 years old and they are past the age of marriage. They have no other option but to remain in the 'dera'. Most of the girls are educated --- B.A., M.A., B.Ed, etc. But they are living a life of hell in the 'dera', simply because the members of their families have blind faith in the Maharaj. We wear white clothes, tie a scarf on the head, cannot even look at men and as per Maharaj's commands, talk with men from a distance of 5-10 feet. To the people we look like 'devis' (goddesses), but we are living like harlots. This time I tried to tell my family that all was not well at the 'dera'. But they rebuked me saying that there was no better place than the 'dera' for here they were in the company of God (Maharaj). They said that I had formed a bad notion about the 'dera' and that I should recite the name of 'Satguru'. I am helpless here because I have to obey every command of the Maharaj. No girl is permitted to talk with another. According to the commands of the Maharaj, girls are not permitted to talk to their families even on the telephone. If any girl talks about the reality of the 'dera', she is punished according to Maharaj's commands. Sometimes ago, a Bhatinda girl revealed the wrong doings of the Maharaj. At this, all the women disciples gave her a sound thrashing. Because of a fracture in the backbone, she is now bed-ridden. Her father gave up the service in the 'dera' and went home. For fear of the Maharaj and his own disgrace, he is not revealing anything.

Similarly girls from Mansa, Ferozepur, Patiala and Ludhiana districts are afraid of revealing anything about the 'dera'. Although they have left the 'dera', yet they do not say anything for fear of losing their lives. Similarly, girls from Sirsa, Hissar, Fatehabad, Hanuman Garh and Meerut disclose as to what happened to them in the 'dera'.

If I reveal my name, I and my family will be killed. I want to reveal this truth for the benefit of the common man, because I cannot bear all this tension and harassment. My life is in danger. If a probe is conducted by the press or some govt. agency, 40 to 50 girls living in the 'dera' will come forward to reveal the truth. We can also be medically examined to find out whether we are still celibate disciples or not. If we are no longer virgins, the matter should be gone into to find out who has violated our chastity. The truth will then come out that Maharaj Gurmit Ram Rahim Singh of 'Sacha Sauda' has ruined our lives.

In Hindi that is now with most media houses: 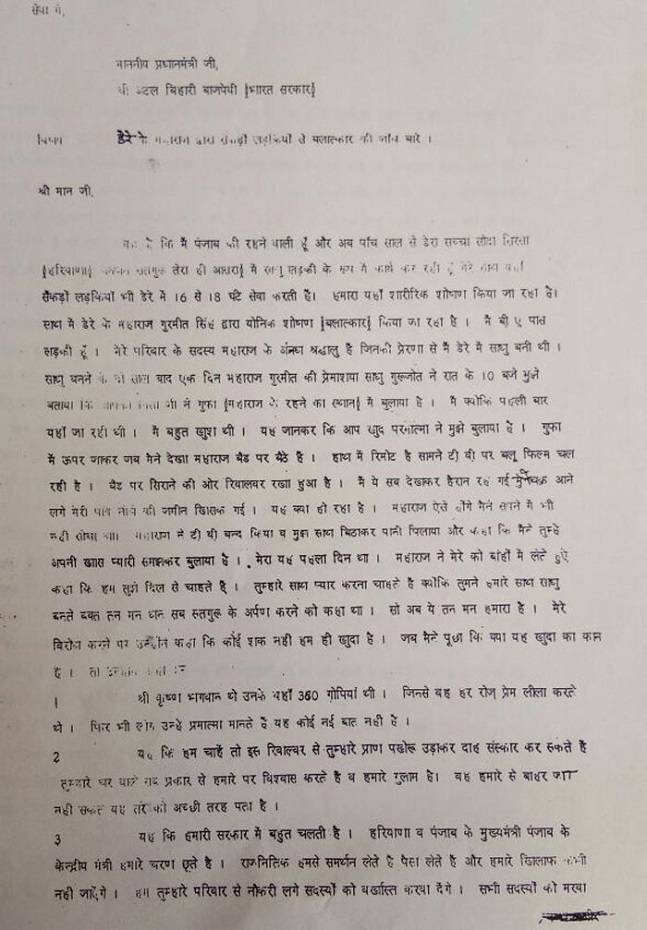 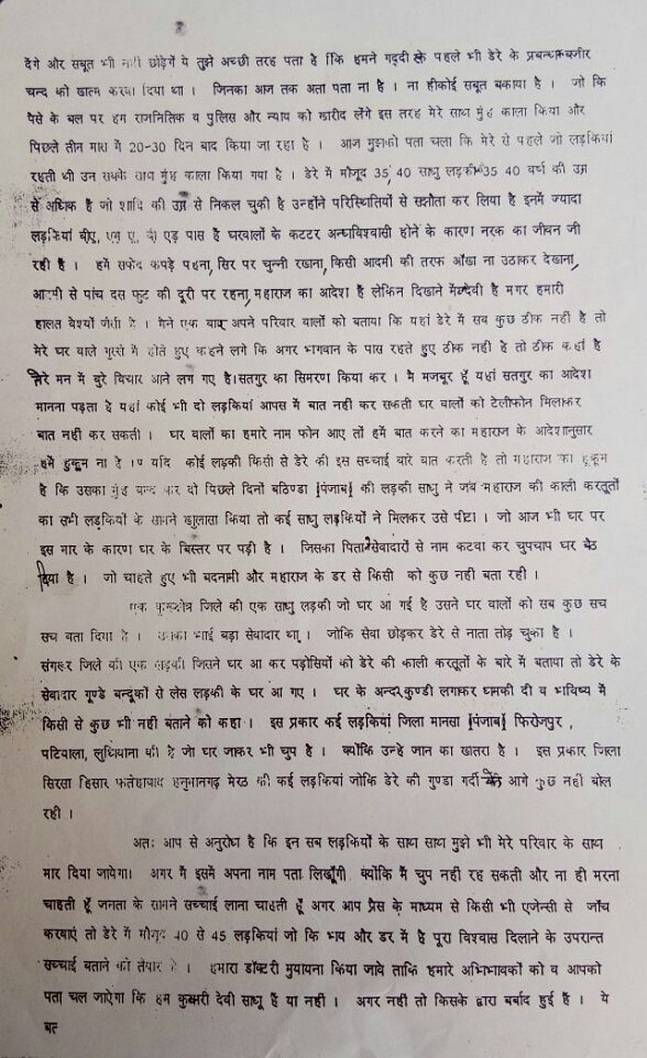