Wife of Key Witness in Ramgarh Lynching Killed in "Accident" Outside Court, After Alleged Threats

NEW DELHI: On July 19 just as Prime Minister Narendra Modi said “killing people in the name of gaubhakti is not acceptable”, Alimuddin Ansari was lynched by a mob in a market at Ramgarh in Jharkhand in broad daylight. On the suspicion of carrying beef in his vehicle, Ansari was beaten to death, the entire incident captured on video that was then shared by the assailants and their supporters on the social media.

Two and a half months later, just as the court was hearing the case, the wife of a key witness in the case Jalil Ansari was killed and Alimuddin Ansari’s son injured in an “accident” just about a kilometre away from the court room. This was after they said they had received death threats in the court room itself, where they were asked not to depose. The two were on a motorcycle going to the residence of the witness to collect his identity card. According to eyewitnesses to this incident, they were followed and hit from behind with the woman dying on the spot, and Alimuddin Ansari’s son now in hospital with injuries.

Local activists told The Citizen that the family had been receiving threats for all these weeks, more so from July when a few of the suspects named in the FIR on the lynching had been arrested. Local BJP leader Nityanand Mahato and Santosh Singh were arrested initially for the murder, with another accused of the 12 named Chhotu Rana surrendering in the Ramgarh court.

Alimuddin Ansari’s relatives told reporters subsequently that he had been killed in full view of the shopkeepers and tea stall owners in the busy market place. But that no one had intervened to try and stop the killing.

A special court was set up to try the case, that has already left one witness dead. The family has been feeling the pressure since, with local Bajrang Dal and BJP members warning them against deposing. The family is convinced of foul play and has filed a written complaint with the police on this: 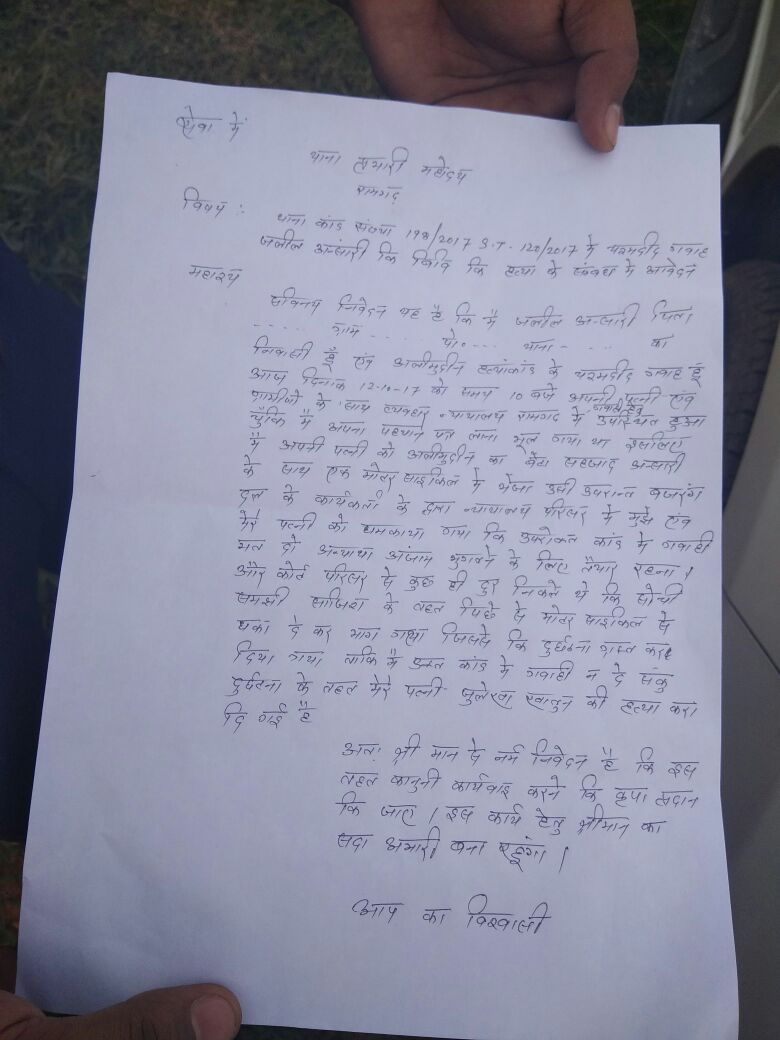 The relatives and local activists insist that this was not an “accident” but a “deliberate murder” to threaten and intimidate the witnesses. Just before the two left to collect the documents, they were asked not to testify according to local activists who were with them in the court premises. The atmosphere of threat and abuse had intensified over the past few weeks, with Ansari’s family feeling the pressure. Jalil Ansari, grieved and sobbing, was in court waiting for his wife to return when he was told that she had met with a fatal accident. Jalil Ansari , an eyewitness to the lynching, has said that both he and his wife were threatened with dire consequences just before she left to get his identity papers.

Maryam Khatoon, wife of Alimuddin Ansari told The Citizen that the family was living under deep fear. "We are terrified of going out of the house," she said speaking of a threat infused environment. She said that her son and Jalil Ansari's wife had gone to collect his Aadhar card from the house. They were followed by men on another motorcycle who kicked and hit them from behind." My nand fell down and my son somehow controlled the bike sustaining some injuries. But my nand died," she said. Life has become so difficult and fearful, we do not know what to do, there is no one to protect us, she added.