NEW DELHI: A whopping estimate close to (or perhaps now even exceeding) Rs 10,000 crores for the ‘biggest ever’ statues of Sardar Patel in Gujarat, Shivaji in Maharashtra, and Lord Ram in Uttar Pradesh is a key ‘achievement’ of the Bharatiya Janata Party that threatens the livelihood of the farming and fishing communities in at least two of these states.

In Gujarat, the Sardar Patel statue is at the initiative of Prime Minister Narendra Modi with a basic budget of Rs 2989 crores that is said to have expanded considerably since 2014. Slated to be the world's tallest statue---how could it be any less---at 182 metres, the Statue of Unity arising from the riverfront in Vadodara near the Arabian Sea Coast of Gujarat is completed to just above the knees.

Ironically the statue is being manufactured at a Chinese foundry with hundreds of Chinese workers expected to arrive in Narmada to assist Larsen & Toubro that has sub-contracted the work to China’s TQ Art Foundry. Nearly 4000 workers are presently working day and night on this prestigious project.

A main concern that remained hidden below the publicity blitz surrounding the statue was of environmental damage, and fears of submergence of villages in the vicinity of the statue. Experts and intellectuals came together to form the Paryavaran Suraksha Samiti, that has written several letters to the state government expressing concern and asking for more information about the environmental impact of the project. According to the Samiti environmental clearances were not obtained for the gigantic structure. However, all this has come to nought with Samiti’s Rohiti Prajapati being quoted by the media as asking,“At what cost and at whose cost is this Statue of Unity being built? Would Sardar Patel, whose image Narendra Modi is using to project himself, have approved of these high-handed and undemocratic actions?”

A year later, in 2015, the BJP government in Maharashtra started construction of a 210 metres tall statue of Shivaji, the 17th century Maratha chief, off the Arabian Sea coastline of Maharashtra, near Mumbai. The height was raised later to ensure that this was higher than the 208 metres statue of Buddha in China. Somehow China has made its influence felt in both Gujarat and Maharashtra albeit in different ways!

The budget for this statue has reportedly increased from Rs 3600 crores to Rs 4000 crores according to last years estimates, and probably surpassed these as well now in real costs. PM Modi had laid the foundation stone for this project as well. 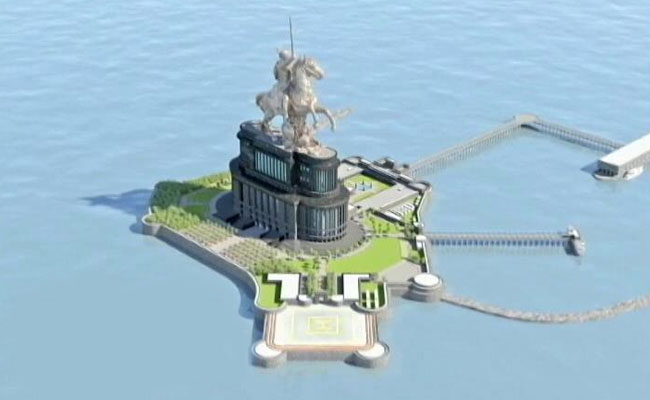 This project too has been opposed by the local fishing community and environmentalists who said that it will affect the marine life and ecology of the Arabian Sea where it is being constructed. The Koli fishing community has been particularly agitated, but faced a police crackdown almost at the very initiation of the project with many of their people being detained, and served notices to prevent them from joining the protest. The Koli’s are fearful of losing their livelihood with the construction of this mega crore statue, and the tourist traffic that is expected to follow.

This project will be completed only by 2021 with environmentalists warning of immense harm to the ecosystem of the Arabian Sea. Thousands signed a petition suggesting the government spent the money on development and much needed infrastructure instead. The petition stated, "Apart from a waste of money, this statue is going to be terrible for the environment, for the traffic situation in South Bombay and a security nightmare.” But this made little impact on the government that is going ahead with the project.

Not to be left behind is Uttar Pradesh Chief Minister Yogi Adityanath who, shortly after coming to power, announced the decision to build a 300 foot tall statue of Lord Rama on the shores of River Saryu in Ayodhya. Environmental clearances have been applied for according to UP government officials with estimates running into yet to be officially announced crores. Meanwhile Adityanath will celebrate Diwali at Ayodhya with 1.71 lakh earthen diyas illuminating the town where the Babri Masjid once stood. A heritage walk reminiscing the return of Lord Rama will be amongst the many schemes that the CM will announce, along with a ‘grand aarti’ of River Saryu.