”RSS/BJP Responsible for Instigating Violence Against Dalits in Maharashtra”

PM Modi with Shimbaji Bhide who he has called an “inspiration.

NEW DELHI: Prime Minister Narendra Modi had described Shimbaji Bhide, one of the two charged with the violence against Dalits in Maharashtra, as an “inspiration.”

At an election rally in Sangli’s Tasgaon in 2014, PM Modi referred to the well known Hindutva activist better known as Guruji as an inspiration. Shiv Sena chief Uddhav Thackeray had also sought Bhide’s blessings during his election rallies at the time.

The Indian Express reported on October 11, 2014: At the Tasgaon rally, Modi had said he had come to seek blessings of Bhide Guruji, who had been an inspiration during the early days of his life. Modi also reminded crowds that “at the instance of Bhide Guruji”, he had visited the Raigad fort to gain inspiration from Maratha warrior king Chatrapati Shivaji, before accepting the responsibility of leading the BJP to power at the centre.

The Prime Minister was also quoted as saying, ““Bhide guruji did not invite me here. I came here on his orders.”

Bhide is the founder president of the Shiv Pratishthan Hindustan, an outfit with sizeable clout in Sangli, Satara, and Kolhapur districts of Western Maharashtra. He was not particularly happy with the growing distance between the BJP and Shiv Sena and was quoted as saying at the time that he had “called them both a couple of times urging to persist with the alliance. While they kept assuring me that alliance would continue, they eventually snapped ties.”

The dastardly attack on the Dalits in Pune now has brought the BJP-RSS in the line of sharp Opposition fire. Even as Maharashtra shut down in protest, Congress President Rahul Gandhi made it clear that the attack in his party’s view had been organised by the RSS/BJP with his tweet: A central pillar of the RSS/BJP’s fascist vision for India is that Dalits should remain at the bottom of Indian society. Una, Rohith Vemula and now Bhima-Koregaon are potent symbols of the resistance. 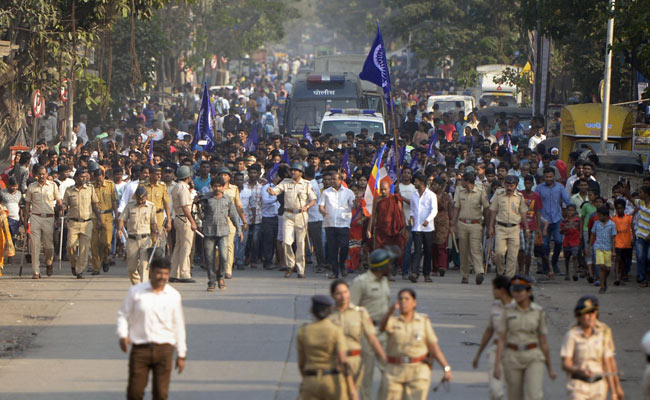 Bahujan Samaj party chief Mayawati ad CPI(M) general secretary Sitaram Yechury drove home the point with both lashing out at the RSS/BJP for the violence that has left a 28 year old Dalit dead in Pune.

"Maharashtra has a BJP government and they are responsible for the violence. It seems the RSS, BJP and other casteist powers are behind it," Mayawati said.

Yechury tweeted, “"The ideology of the RSS-BJP has always believed in suppressing those historically oppressed. This latest episode in Maharashtra, along with several others in the recent past just reinforces this."

The anger was reflected in Parliament with both Houses witnessing stormy scenes and the Rajya Sabha being adjourned several times by the Opposition MPs.

Kharge demanded a statement from Prime Minister Narendra Modi saying, “Supreme Court judge should be appointed for inquiry in Bhima Koregaon violence. PM should also give a statement, he can’t stay mum! He is a mauni baba (mute spectator) on such issues!”