NEW DELHI: On Monday January 22 approximately 300 lawyers gathered demanding a fair and just inquiry into the death of Chief Justice Loya. The peaceful Silent Protest March was held in front of the Supreme Court of India.

On the call of Lawyers’ for Democracy, all sections of society including Lawyers’, Delhi University Teachers & Engineers of CPWD participated in the demonstration. The protesters were carrying placards demanding court monitored fair and impartial probe in the death of Judge Loya. 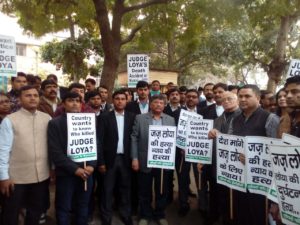 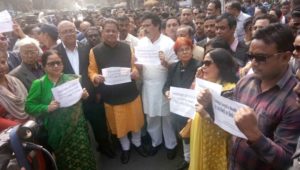 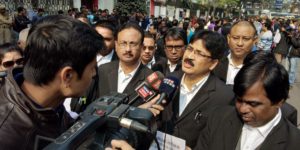 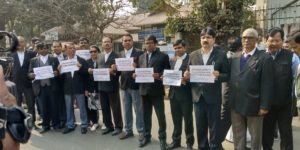 The protest was led by Advocate Kaushal Yadav, who said that, “we are demanding a fair and impartial probe in the killing of Judge Loya who was handling the case of the death of Sohrabuddin.” He is the convenor of a lawyers group called ‘Lawyers for Democracy. He said they will be meeting again after January 26 to decide on the next initiative.

A bench headed by Chief Justice of India Dipak Misra, and comprising of Justice DY Chandrachud and Justice AM Khanwilkar heard the petitions seeking an independent investigation into the death of CBI Judge BH Loya, who was hearing the alleged fake encounter case of Sohrabuddin Sheikh at the time of his death.

In a heated hearing that took place before the Supreme Court, Dushyant Dave expressed his opposition to the appearance of Harish Salve as counsel for respondents, stating “Mr. Harish Salve has earlier represented Amit Shah in a related matter, therefore he should not be allowed to assist in this matter. There is clear conflict of interest. Let the assistance of the Attorney General be sought”

Senior advocate Indira Jaising, seeking permission to intervene on behalf of certain civil servants, submitted that there were documents missing from the records which they had in their possession and wished to produce. Justice Chandrachud has directed all documents to be filed in a common compilation and presented before the bench.

Harish Salve requested for an order by the bench to direct the counsels to keep these documents within themselves and not communicate them outside of the parties involved. This, senior advocate Indira Jaising pointed out, would amount to a media gag and vehemently opposed the same. Both counsels for petitioners have strongly expressed their concerns with imposing such a gag. The bench finally rejected the prayer and no such gag has been ordered.

The matter is scheduled for further hearing on February 2.

This case has been at the centre of controversy since the issue was raised in the press conference held by the four senior-most judges on January12. At the press conference the media asked the judges if their concerns were connected to the Judge Loya case to which Justices Chelameswar and Gogoi responded in the affirmative. There have been allegations against the CJI of allotting matters to benches arbitrarily and ignoring the seniority of judges when constituting benches of grave importance.