In a letter addressed to the Students’ Union president of Aligarh Muslim University, Maskoor Ahmad Usmani, former Vice-President of India Hamid Ansari has supported the ongoing protest and demands by the students, teachers and other members of AMU family.

Hamid Ansari thanked the AMU students’ union for their decision to confer honorary life membership on him and said that the disruptions caused by the intruders and anti-social elements on May 2, 2018 afternoon which led to cancellation of the ceremony, is rightfully condemned by the students, teachers and alumni of AMU all over the world.

Ansari raised questions over the “precise timing” of the disruption and the “excuse manufactured for justifying it”. In the letter, he further wrote, “The program of the day, including an address by me in the Kennedy Auditorium, was publicly known. The concerned authorities had been intimated officially and were cognizant of the standard arrangements including security for such occasions. In view of it, the access of the intruders to close proximity of the University Guest House where I was staying remains unexplained.” 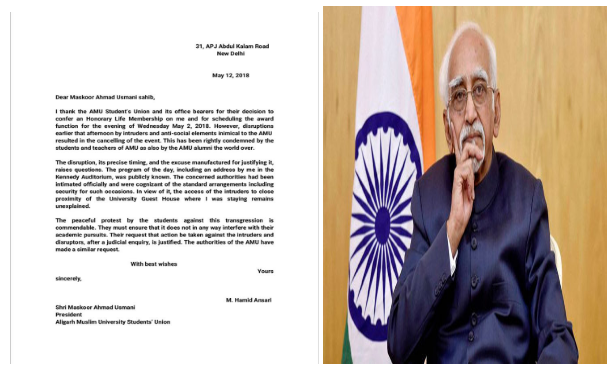 “The peaceful protest by the students against this transgression is commendable.”- Ansari wrote in the letter. He also mentioned that their request that action be taken against the intruders and disruptors, after a judicial enquiry, is justified.

Lt Gen Zameer Uddin Shah(Veteran) who is also a former Vice Chancellor of AMU spoke to The Citizen, “I entirely back what Hon’ble Former Vice President of India Mr Hamid Ansari has written to the AMU Students Union. This is not an issue concerning Jinnah’s Portrait. It was an attempt to denigrate the leading Muslim figure of India and create a controversy to bring a bad name to the leading university of the country, something which is not palatable to some some sections of sectarian and narrow minded people.

Meanwhile six students including two girls, Vice President and the Cabinet Member of the Aligarh Muslim University Students Union (AMUSU) are on relay hunger strike since May 12 midnight under their demands. Sajjad Subhan Rather, Vice President, AMUSU, says, “We are demanding non bailable arrest of the goons who attacked the Aligarh Muslim University, immediate judicial enquiry and strict action and suspension of the policemen who escorted the goons.” 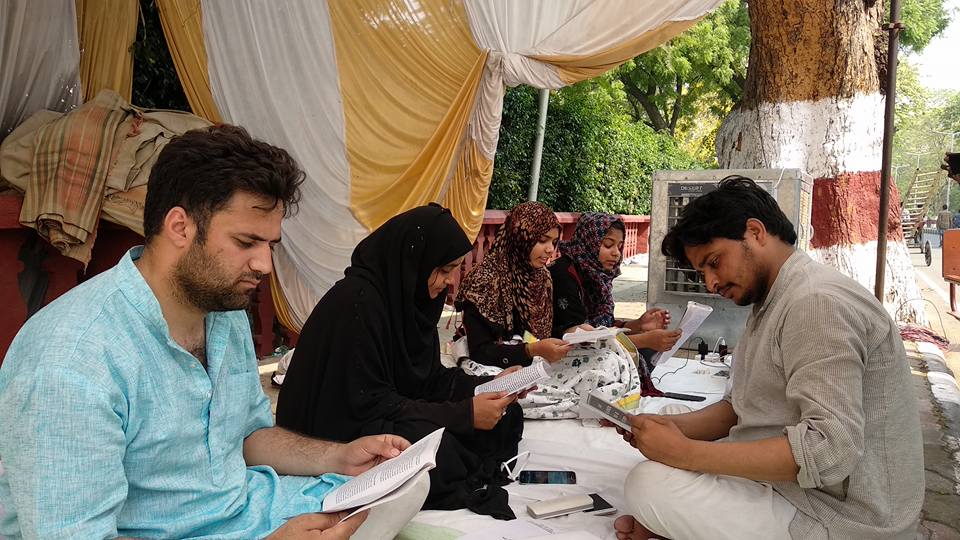 The controversy started when BJP MP from Aligarh, Satish Kumar Gautam, wrote a letter to AMU VC threatening to either remove the portrait of Md. Ali Jinnah or he himself would have to come with the supporters to the campus. The portrait of Jinnah was hanging there since 1938. After two days, on May 2, 2018, a group of Hindu Yuva Vahini youths trespassed into the Aligarh Muslim University and raised objectionable and intimidating slogans against the portrait of Mohammed Ali Jinnah in the Students Union Hall. A felicitation ceremony of Mr Hamid Ansari the former Vice President of the country by the AMUSU was going on at the same time in the campus.

Students protested the attack and handed the intruders over to the Civil lines Police Station. Students of AMU rallied and protested after the police had failed to register FIR against the miscreants. The protest demonstration met with use of tear gas, lathicharge in which several students were brutally beaten up, severely injured.

The university is getting the support from its Alumni Association, Teachers Association, Old Boy’s Association and from other universities including Banaras Hindu University, Jamia Millia Islamia, Jawaharlal Nehru University and other institutions of the country.

The portrait of Jinnah was reportedly removed by the university officials for “cleaning purposes”. AMU Vice Chancellor had also met with Home Minister over this issue.

Trying to know the police action in this regard, The Citizen tried to reach Yash Veer Singh, Superintendent of Police, Aligarh City, for his comments, but he was unavailable.