NEW DELHI/MUMBAI: At least 200 activists of the Shiv Sena and the Bharatiya Janata Party in Surgana joined the CPI(M) mass organisation All India Kisan Sabha in support of the protest and agitation for farmers rights. They were welcomed with slogans of Lal Salaam in a mass gherao of the Surgana tehsil office by thousands of farmers as all publicly denounced the ‘anti-farmer’ policies of their erstwhile political parties.

The Maharashtra farmers stir is gathering momentum after the Long March that had Chief Minister Devendra Fadnavis agreeing to all demands. However, given the partial and delayed implementation the farmers are back on the roads. On June 12, the 31st anniversary of the martyrdom of Laxman Bagul, Adivasi peasants gheraoed the district headquarters demanding immediate implementation of their demands on the Forest Rights Act, pension, loan waiver and remunerative prices that the BJP government had conceded on March 12 after the Long March.

Bagul was shot dead on June 12, 1987 at Vaganbari village near Umbarthan in the Surgana tehsil of Nashik district during the AIKS struggle for forest land rights then. This has been on ongoing fight with successive governments blocking the farmers rights, in fact diluting these even further.

Interestingly, CPI(M)’s woman member Sonali Bagul was elected as the President of the Surgana Municipal Council just last week. It is the first time that the Left has secured this position.

The meeting decided to continue the gherao until the Tehsildar agrees to the implementation of the demands. 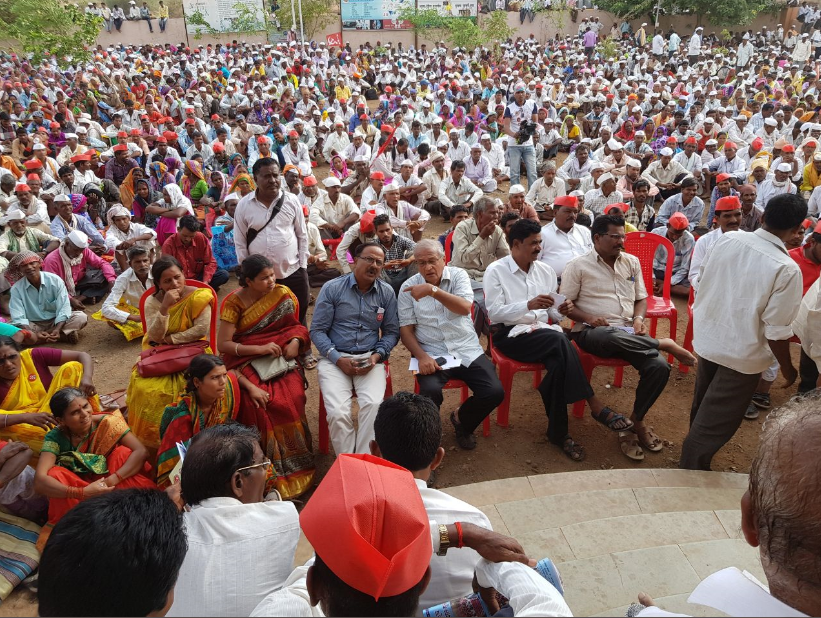 The government silence on the farmers protests is now deafening. Just recently the BJP lost the Lok Sabha bypoll in Kairana because of the Jat farmers, who voted in the Rashtriya Lok Dal candidate in sheer ‘anger.’ Farmers had no hesitation telling reporters who travelled through the constituency that they had made a mistake voting for the BJP, and that the sugar cane glut and prices were a clear example of the ruling party’s disinterest in the peasants and their problems. Several farmers in what was a violence hit belt in 2013 with Muslim families fleeing for their lives, said that this was a bad mistake and that they would like their ‘tenants’ to return.

Prime Minister Narendra Modi had made tall promises in the campaign for the 2014 Lok Sabha polls that have not been fulfilled. The distress has only deepened according to agriculture experts, with the farmers suicides since 1995 having topped the 300000 mark even by official National Crime Record figures. Agrarian experts insist that the numbers are far higher, with at least 60 percent of farmers in crippling debt.

Farmers as a community are coming together in support of the demands that share a common agenda of remunerative prices, loan waivers and forest rights. As AIKS leader Ashok Dhawale who led the Long March, and is currently at the head of the ongoing gherao, told The Citizen earlier, the farmers are desperate and yet determined to secure their rights now. It is a matter now of life and death, a sentiment that is echoing through the hinterland far away from the eyes of the captured media. This is the primary reason why peasants with the ruling BJP-Shiv Sena alliance in Maharashtra for instance are feeling the heat, and sharing the concern of those sitting for their demands have started what could become a process of exodus. More so as the ruling alliance is seen largely indifferent to their demands, with the Shiv Sena of course turning the tables on to the BJP for this.

Needless to say the mass protest has not been covered by the so called mainstream media. It is as if the farmers have dropped from view, and do not exist, with their high unpayable loans, their homes without food, their heavy debts, and their acute distress.