A Young Jat Leader Rises in Rajasthan: 'I Will Bring About A Change', Says Hanuman Beniwal

NEW DELHI: In a hard fought election a former BJP MLA Hanuman Beniwal could emerge as the tipping point. Thrown out of the Bharatiya Janata Party where he was a legislator, for attacking Chief Minister Vasundhara Raje, this comparatively younger leader is making waves addressing the youth and the kisans specifically through his independent Rashtriya Loktantrik party that was launched just four days ago at a Hunkar Rally in Jaipur.

Beniwal told The Citizen that he was truly independent, and was determined to bring a ‘third front’ into existence in Rajasthan, challenging both the Bharatiya Janata Party and the Congress. He had launched a strong campaign against the corruption of the Chief Minister, and now said that whether she stayed or left, he had no intention of going back to the BJP. “Where now, I have my own party and I will bring a third front into Rajasthan,” Beniwal said.

He was as adamant about not tying up with the Congress. “Yes they have approached me many times, but I am here against both the BJP and the Congress,” he insisted.

He has an alliance with another anti-Scindia leader from the BJP Ghanshyam Tiwari who resigned from the BJP and formed the Bharat Vahini Party. Tiwari has been a six term MLA from Sanganer constituency and one of the major leaders who helped establish and take the BJP forward in Rajasthan. He was not expelled from the party, but led a strong campaign against Scindia, after which he resigned and decided to form his own independent outfit. 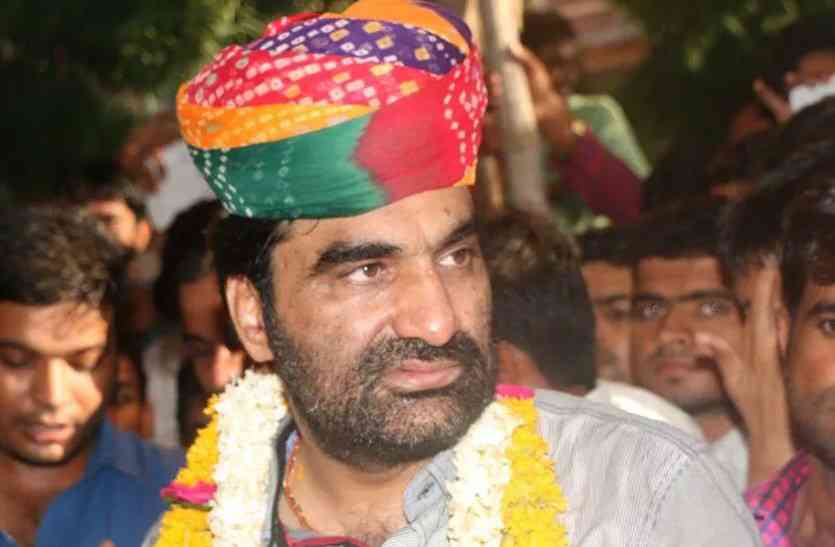 Beniwal said they are both in alliance and are currently in talks with the Bahujan Samaj party for the forthcoming Assembly polls. “If this happens we will win at least a 100 seats,” he claimed.

It is not clear as yet whether Beniwal has his links open with the anti-Scindia faction in the BJP as well as the Congress party. Like Hardik Patel in Gujarat---who he says he has never met but would if the circumstances so require---Beniwal also comes from the BJP and has rebelled against its “anti-kisan, anti-youth policies. He said that unlike the Congress that is taking the votebank of “Muslim, Meenas, Gujars” for granted, he has the support of the youth of all communities as he is speaking of their problems, with unemployment and job opportunities heading the list. “The youth are flocking to me,” 46 year old Beniwal insisted. “ And in just few days after the party was formed ours has become a movement for employment, governances, kisans and jawans.”

“Kisan aur jawan” he said is his party’s motto with the emphasis on the youth and their rights.

Beniwal, from all accounts, is getting some traction in Rajasthan. He is the face of the Jats in Rajasthan and being increasingly recognised as such. That he is drawing blood is evident from an attack on him by a mob from the Rajput Karni Sena near the Jobner-Kalwar road. His vehicle was damaged but his driver managed to get him to safety. Interestingly, a protest demonstration against the attack was organised by the National Students of India, the Congress students wing. Albeit indirectly in that first a large number of students from Rajasthan University protested under the banner of Kisaan Yuva Aakrosh Rally. This was lathicharged by the police after which the NSUI organised a protest against police brutality.

Beniwal said he represents a change, and is working to effect a change in the politics of Rajasthan. He said that the state was fed up with the politics of both the BJP and the Congress, and the youth were looking for a third alternative. “I am working to provide this alternative,” he said hopeful that his talks with the BSP would lead to the installation of a valid third front in the state. He said that the youth, kisans and all communities of Rajasthan wanted a change and “lakhon ki taadat (in lakhs) are coming with me.”