133 Internet Shutdowns by Governments in India 2018, J&K and Rajasthan in the Lead

NEW DELHI: Last year India reportedly saw over 70 internet shutdowns countrywide, earning it the top spot in the list of countries with the most shutdowns. In 2018 this number almost doubled - 133 internet shutdowns were reported in India this year, according to the Software Freedom Law Centre’s Internet Shutdown Tracker.

“Every other day, or every three days there is a shutdown in India, from the data we are getting,” Prasanth Sugathan, the organisation’s legal director, told The Citizen.

Jammu and Kashmir saw the highest number shutdowns this year, 41 as of November, followed by Rajasthan which had 29 shutdowns.

“In Kashmir every now and then they shut down the internet, and whenever I try to contact someone from Kashmir they tell me the internet is not working. It’s like if Kashmir doesn’t have internet, it will be peaceful - but that is wrong,” said Rajya Sabha MP Husain Dalwai, speaking to The Citizen.

Dalwai had raised a question in Parliament regarding the shutdowns, as official data about their frequency and causes is hard to come by. In its response the Ministry of Home Affairs told Dalwai it does not collect data on internet shutdowns.

Media reports have stated that in Rajasthan, internet shutdowns have mainly been about preventing cheating in exams. Dhirendra Singh Rajpurohit, who runs a hardware store in Jodhpur, had filed a writ petition in the Rajasthan High Court against these shutdowns.

According to Apar Gupta, executive director of the Internet Freedom Foundation, “Internet shutdowns are a disproportionate violation of the constitutional right to free speech and expression. They result in a total curfew on speech itself.

“The argument is made that internet shutdowns are an extraordinary event, limited to troubled states. But governments have ordered shutdowns even in relatively stable states such as Haryana, Punjab, Rajasthan, Maharashtra, Tamil Nadu and Odisha.

“Shutdowns have even been ordered to prevent cheating in exams, which is completely unrelated to national security.

“In a shutdown, in a given geographic area for a specified time all internet facilities are stopped. This results in all speech getting blocked, thereby preventing even legal forms of speech,” Gupta elaborated.

Arguing that shutdowns do more harm than good, Prasanth Sugathan cited the example of Kerala, “where we recently had the flood situation. There was a lot of incorrect information going on, but the good thing was there was also a regular stream of messages from the authorities on Facebook as well as Twitter.

“If there had been a shutdown things would have been different. False messages can be countered by messages from government officials, and I think that is the way we should approach things, instead of a total shutdown.”

Dalwai concurred, saying, “The freedom of the people should not be curbed, just because the internet is being misused. The government should track down the people misusing it, instead of a blanket internet shutdown.”

In a recent report Freedom House stated that “internet freedom declined in 2018 due to a staggering uptick in local internet shutdowns”.

The report scores India 43/100 or “partly free” on an index of internet freedom, where a score of 0 means complete freedom.

These frequent and arbitrary shutdowns have led to fear among these organisations that freedom on the internet could meet the fate of other mediums. “Media such as print or TV have some amount of government control over them, which is not yet the case with the internet or social media, because of their decentralised nature.

To this Apar Gupta added, “It may not only become a much more regulated or policed medium, it may even become an implement of control of power by large entities - whether private or state. This danger is real and it exists, and we are walking towards it.”

The lack of official government data on internet shutdowns has been a concern raised by all these organisations. “Despite repeated requests the Department of Telecommunications (DoT) has failed to act on transparency, with respect to a centralised repository of all legal orders issued for shutting down the Internet in India.

“In fact, quite often RTI requests for a catalogue of internet shutdown orders have been rejected. In our latest correspondence with the DoT, it categorically stated that it does not maintain that data,” Gupta emphasised.

The DoT recently issued a letter urging officials to be more sensitive with regard to internet shutdowns.

The advisory reminds officials that “the Temporary Suspension (Public Emergency or Public Safety) Rules, 2017, empowers State Governments to issue directions for the temporary suspension of telecom services only on the occurrence of public emergency or in the interest of public safety”.

This move was appreciated by the organisations we spoke to, but concerns remain about the arbitrariness and lack of transparency in the system. “A greater amount of transparency is required in the practice, process and substance of legal rules regarding shutdowns, which need to be put forth for public consultations,” according to Gupta.

Freedom on the internet has been debated for a while now, and our trigger happy governments’ increasing shutdown count seems to be the latest threat. 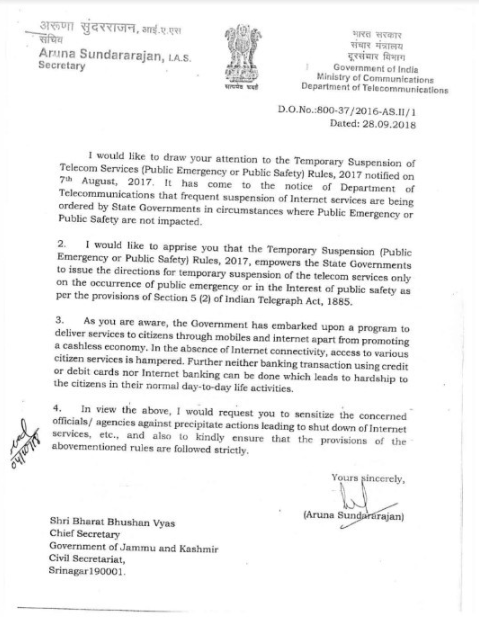