HYDERABAD/NEW DELHI: The Vice Chancellor and management of the University of Hyderabad have sparked new protests in the campus by removing “Velivada’, a temporary structure that was erected in the campus on January 5 ahead of the third death anniversary of Dalit student Rohith Vemula who had committed suicide on January 17. Vemula was suspended along with four other Dalit students from their hostel in 2016.

The students reportedly woke up on Sunday morning to the fait accompli with the Ambedkar Students Association informing The CItizen that the administration under Vice Chancellor Podile Apparao brought down the structure and “destroyed and removed the portraits of Dr.B.R.Ambedkar, Ramabai Ambedkar, Mahatma Jyotiba Phule, Krantijyoti Savitribai Phule, Chatrapathi Shahuji Maharaj, Komaram Bheem, Gurram Jashua, Periyar.E.V.Ramaswamy, and Manywar Kanshiram from Velivaada”.

The students protested last night and continued on Monday demanding that the photographs nd portraits be restored. ASA asked for the arrest of VC Apparao for violation of the SC/ST Prevention of Atrocitires Act and his removal from the post as “his presence has become highly detrimental for the interests of Dalit and backward classes” in the university. 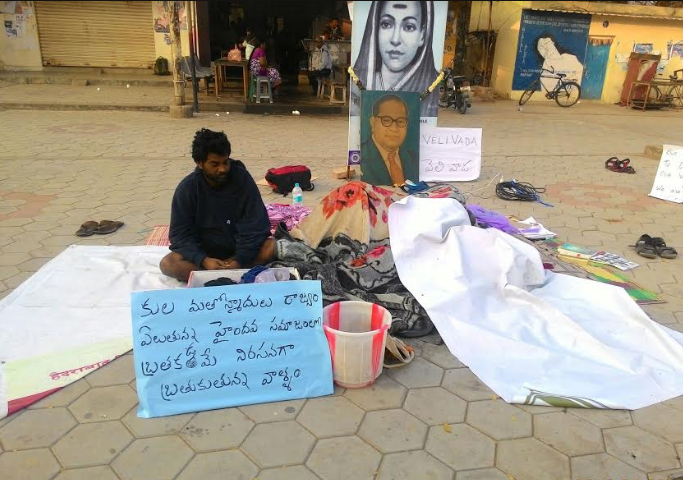 ASA further pointed out that, “ Velivaada at University of Hyderabad remained as a testimony to the acts of harassment and discrimination meted out to Five Dalit Research Scholars of ASA including Rohith Vemula. The investigation of the Atrocity Case is still pending in the Police Station where Podile Apparao is still an accused in the case, and hasn't got any relief from the Hon'ble High Court for prevention of his arrest yet if he chose to destroy the evidence and commit further crimes one could visualize how caste connect/network made him a powerful entity. Moreover the danger ahead is that Podile Apparao has become a model for other Higher Educational Institutions in curbing the rights of marginalized sections”.

The authorities said they had issued notices to the notified members of the ASA on Saturday to remove Velivada. The notice signed by the VC read, “The University Administration has been issuing several circulars not to display any banners, posters, flexies etc on the campus without prior permission. However, it has come to the notice of the Administration about erected flexies and posters at the shopping complex (North) on the interim night of 4/5 January around 00.45 am, in spite of objection made by the Security personnel not to destroy the floor by digging the University property by erecting a temporary shed with banners, flexies etc.”

ASA denied this, saying “we never dug any hole and only used stones to support the structure.”

Vemula and the other students had been expelled from the hostel, and were camping outside, after an altercation with then ABVP president Sushil Kumar in the university. Unable to bear the humiliation of the “social boycott” Vemula committed suicide in what ASA has since described as “institutionalised murder.” 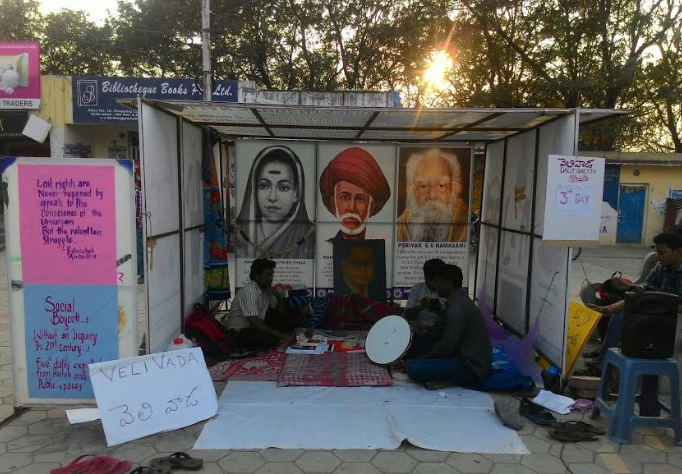 The desecration of the photographs and portraits of leaders embraced by the Dalits is expected to resonate across campuses further fuelling the strained relations between the BJP and the students.