TMC gears up to stop BJP in Lok Sabha polls

At what her party leaders predict will be the mother of all rallies, Banerjee is set to herald in the Lok Sabha elections with lakhs at Kolkata’s Brigade Grounds on Saturday, January 19. As she herself has said, she has set a 1977 rally organised by CPI(M) and Jyoti Basu as the competition, and is determined to make hers even bigger.

Opposition leaders from across India have been invited and many have confirmed. Three chief ministers---Arvind Kejriwal of Delhi, Chandrababu Naidu of Andhra Pradesh and H.D.Kumaraswamy of Karnataka --will be present representing the Aam Aadmi Party, the Telugu Desam and the Janata Dal-S. A former Prime Minister H.D.Deve Gowda has also confirmed his participation.

The Congress party will be represented by Mallikarjun Kharge instead of Sonia Gandhi and Rahul Gandhi. All other parties, BSP, SP, Rashtriya Janata Dal, National Conference, Nationalist Congress Party have been invited. Banerjee has also invited the Kerala Chief Minister Pinarayi Vijayan but has still to hear from him. BJP’s Shatrughan Sinha has confirmed participation.

The Trinamool Congress, under attack from the BJP, is pulling out all the plugs to make Saturday’s rally a resounding success. West Bengal is home to 42 Lok Sabha seats of which the TMC had won 34 in the last elections with a 39.05% vote share. The CPI-M had slumped to two seats but retained a little over 29 per cent of the vote share, but popular wisdom in West Bengal insists that the Left front has gone down further. However, the BJP despite getting just two seats in West Bengal in the 2014 elections managed to capture over 16% vote share that it has been working on assiduously since.

BJP President Amit Shah, currently recovering from Swine Flu, had earlier announced a series of meetings through West Bengal starting January 20. That the state is a key focus area for the BJP is not a secret, with the party determined to expand its footprint not just in terms of the percentage of votes, but also in the number of seats.

Mamata Banerjee’s ‘mega rally’ thus is important for her to retain the Lok Sabha seats won in the last elections by her party, and ensure that the BJP does not expand further. Interestingly the Left and the Congress that had won four seats with just 9.58% of the vote share are not perceived to have improved their standing, with the challenge to the TMC in the 2019 Lok Sabha elections coming from the BJP. The mega rally bringing together parties from ‘Kashmir to Kanyapuri’ is thus expected to give the ruling party of West Bengal a shot in the arm, and boost the morale of the workers in the run up to the general elections. 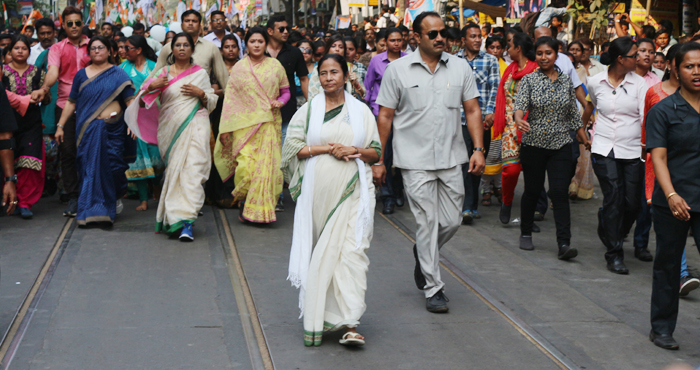