NEW DELHI: “By showing me injustice, he taught me to love justice. By teaching me what pain and humiliation were all about he awakened my heart to mercy. Through these hardships I learned hard lessons. Fight against prejudice, battle the oppressors, support the underdog.”

These lines by the American lawyer Roy Black so inspired Shahid Azmi, that after being implicated on false charges of terror and spending years in jail, he decided to walk in Black’s footsteps and become a lawyer himself.

Azmi was no ordinary lawyer. He had seen the system closely, and attended court trials as a terror accused before being exonerated by the courts of all charges against him. His life after acquittal was no less intense. Within a few years of practising law, living out his commitment to justice for all, he was killed on the night of February 11, 2010, allegedly at the behest of underworld don Chhota Rajan.

Azmi’s life, well reported and also depicted in Hansal Mehta’s film Shahid, was full of twists and turns with some contentious events. Disturbed by the 1993 riots, Azmi fled to Kashmir to take up arms against the state - though his family denies any knowledge of this. Disillusioned by the movement he returned home to Mumbai within months, only to be arrested later on charges of plotting kill some politicians.

He was charged under TADA (the Terrorist and Disruptive Activities Prevention Act) and having spent five years in prison he returned to society resolute, to stand up for others still languishing in jail as he had.

In a career spanning no more than seven years Azmi came to be regarded as one of the most articulate criminal lawyers in the fraternity. His reputation made him legal counsel for several organisations helping the families of people falsely implicated on charges of terror.

Before his murder Azmi had secured the acquittal of more than a dozen youth languishing in jail on false charges, and was representing another 50 accused under the various terror laws.

There were the likes of Fahim Ansari, incarcerated on charges of drawing maps for the 26/11 terror attacks. Azmi’s arguments helped secure Ansari’s acquittal from the case months after his own death, and the order was upheld by the Supreme Court.

However, his brilliance as a lawyer also drew the ire of ‘nationalist’ underworld dons such as Chhota Rajan, allegedly with the backing of people in power, as his brother Khalid has maintained throughout.

“Shahid knew that his end was near, it would emerge in every conversation and advice that he would give to us. He had started to insist that I study law. He would point out that after him someone would have to take the battle ahead. It was as if he knew that death was looming over him. And he had reasons for thinking so,“ Khalid Azmi told The Citizen from Mumbai.

“Shahid bhai’s last days fighting for Fahim were extremely critical. He was consistently being threatened over the phone. Many people close to him at the time wanted him to walk out from the case. But Shahid bhai was made of another mettle. He knew why he had landed in the profession and didn’t want to reason it out with anyone.

“He was committed to defending Ansari even if death awaited him. And finally on the the night of February 11 it happened. Two people barged into his office as clients and shot him at point blank range,“ Khalid recalled.

He added that his brother had inspired thousands of young people from across the country to walk in his footsteps.

“Our brother is dead but his voice and ideas continue to resonate, even after nine years of martyrdom. So many youths are joining the legal profession inspired by him. His contribution was not only in terms of defending innocents, but also inspiring people towards the idea of justice,” Khalid exclaimed.

Ironically, the pace for securing justice for Shahid himself has been much slower than those he stood for. Nine years after his death his case is still being heard across courts in Mumbai. At the moment Inder Singh, who was the assistant at Shahid’s office in Kurla, is being presented in the court as witness to murder. Singh was with Azmi in the office when bullets were pumped into Shahid’s body.

Two of the accused, Vinod Pichare and Pintu Bhagle, have been granted bail in the case while the other two, Devendra Jagtap and Hasmukh Solanki, are still in jail. Their bail applications were rejected by the Supreme Court last year.

Azmi’s mother, Rehana, who was deeply affected not just by her son’s death but also his nerve-wracking life over 32 years, today stands as a strong advocate for justice.

“Yes, it was a great loss for me. But now I also take pride in being his mother. What else can be more satisfying for a woman to have a legend as her son? Shahid’s life was no less than any legend. He had certain ideas about life and stood by them,” she told The Citizen.

For Azmi’s office in Kurla not much has changed, except that CCTV cameras have been installed. The quote by Roy Black is still hanging on the wall. 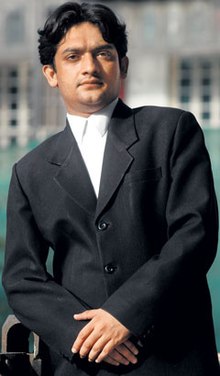