Support the Global Campaign of Free Rights Activists in India

NEW DELHI: International scholars including Noam Chomsky, James Petras, Angela Davis, Fredric Jameson, Bruno Latour, Ilan Pappe, Judith Butler amongst others, have signed a statement castigating the Modi led government for creating an environment of fear through arrests, intimidation and violence. Under the aegis of Fresh Perspectives, USA the academics from the US and UK mostly have expressed deep concern about the current environment in India under Prime Minister Narendra Modi and the “alarming clampdown on every form of dissent in India.”

The full text of the statement that appeals to “all students, workers, educationalists, writers, social justice activists, and Non-Resident Indians (NRIs) to take a stand on these human rights violations and demand immediate release of all imprisoned rights activists,” reads:

Since Narendra Modi took the Prime Minister’s office in 2014, there has been an alarming clampdown on every form of political dissent in India.

In a similar way, several years ago, Delhi University Professor Saibaba and political activist Kobad Ghandy were imprisoned on fabricated charges. All these social activists have a long history of challenging state violence and human rights abuses through democratic and constitutional means. Through their civil and human rights activism, they have become the voice of the voiceless, be it socially and economically marginalized communities, indigenous people, religious minorities, and victims of all kinds of oppressions in society.

As public intellectuals, writers, and poets they took the responsibility to develop political awareness, critical thinking, and the notion of social justice among the general public.

In Modi’s India, appalling attacks on Dalits (the so-called untouchables), Adivasis (the aboriginals of India), rationalists, Muslims and other religious minorities, and rights activists including human rights organizations like Amnesty International have continued and intensified.

The Modi Government, as part of its long-term political agenda to establish the Hindu nation, has been using its authority to silence any voice that challenges its domination and repression. The government has been using legal and extra-legal methods to suppress democratic, rational, and secular forces. In recent years, the vigilante groups associated with the ruling party have killed several rationalists, journalists, and secularists.

Moreover, the ruling party, by using its “legal” methods, has coercively detained and imprisoned public activists who are defending the fundamental rights of the people. To put them in prison the state first used its friendly media outlets to propagate the lie that these civil rights activists were conspiring to overthrow the Indian state.

By concocting a series of conspiracy stories, both the Indian state and the Maharashtra Government worked together to put civil rights activists behind the bars under draconian colonial sedition law.

These human rights violations raise questions of the responsibility of the international community and the global civil society in times of crisis. When the Supreme Court is unable to check the abuse of constitutional power and the judicial system cannot deliver justice to victims of state violence, then what should citizens do?

With all these undemocratic and authoritarian activities, the Indian state appears to be bulldozing its own constitution that upholds fundamental democratic rights and secular values.

Using all kinds of oppressive methods, the Modi Government is creating fear and apprehension among the people who challenge its neoliberal economic policies and ultra-nationalist agenda. These are pressing questions that we, as civil/human rights activists, are very concerned about.

We sincerely appeal to all students, workers, educationalists, writers, social justice activists, and Non-Resident Indians (NRIs) to take a stand on these human rights violations and demand immediate release of all imprisoned rights activists.

As citizens and immigrants, your voices play an important role in shaping public opinion in the campaign to free these wrongfully imprisoned activists. Your support to democracy, justice and free speech will help boost the morale of rights activists and democratic struggles in India. We invite all of you to actively participate in this global campaign and extend your solidarity with democratic rights activists. 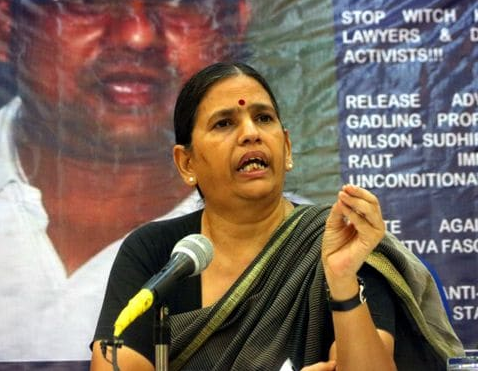