Republic TV In The Eye Of An AMU Storm, Campus Simmers

ALIGARH: Aligarh Muslim University is on the boil. Since the past nine months or so the campus has been simmering.

Almost every month the campus is being targeted by the right wing groups with charges ranging from “treason” to “hurting religious sentiments” on charges of reusing cooking oil used for non vegetarian food. Mature handling by the university administration had prevented the campus from erupting. Just last fortnight the Akhil Bharatiya Vishwa Parishad members used the pretext of hoisting the national flag to raise provocative slogans and taunt others on the basis of religious identities.

On Monday, however, suppressed anger boiled over following two unconnected incidents. A FIR was filed against 12 AMU students union leaders following a clash with ABVP members near the boundary of the university campus. The AMU student leaders have been booked under eight charges, including sedition and attempt to murder on the basis of a complaint filed by the district president of the Bharatiya Janata Party yuwa morcha Mukesh Lodhi. According to him he was driving along peacefully when an armed mob of AMU students forced him to stop and attacked him. He claimed that the students were shouting Pakistan zindabad slogans.

The background of this narrative is that the AMU students union had invited a dozen social and political outfits of Uttar Pradesh, most of them nondescript, for a seminar on the emerging political situation in the country. The intention reportedly was to chalk out an agenda for a charter of demands to be placed before different political parties in the run up to the Lok Sabha polls. Included in the list of invitees was MIM Member of Parliament from Hyderabad Asaduddin Owaisi.

The Citizen asked AMU officials why Owaisi had been invited for a meeting at a time when the university was already feeling the heat from the right wing organisations. AMU spokesperson Professor Shafay Kidwai sought to explain this with, “ AMU students union is an autonomous body and we have little say on whom they invite for different functions ."

The scheduled function had hardly received any media attention but intestingly a team of media persons from Republic TV arrived from New Delhi to cover the occasion . Kidwai pointed out that" Owaisi did not turn up but a group of ABVP activists led by Ajai Singh a post graduate law student from AMU and some outside elements collected at the entry point of the campus and started raising slogans against Owaisi. ( Ajai Singh is the grandson of BJP MLA Dalveer Singh and since the past year has been in the forefront of anti AMU agitations in and outside the campus ).

A group of policemen posted at the spot persuaded the protestors to leave and it appeared that the tension had been defused.

However, the team from Republic TV moved inside the campus and started interviewing students. According to the president of students union Salman Imtiaz the media team started asking "offensive and provocative questions from the crowd and kept filming despite efforts by students who tried to dissuade them. "

A team of officials from AMU proctorial department rushed to the spot and explained to the TV crew that they cannot film without permission from authorities. Heated words were exchanged and in the melee which followed a member of the crew was hit and his camera snatched.

About three hours after this incident a group of ABVP activists along with some supporters from outside once again collected at the AMU crossing adjoining the AMU vice chancellor s office complex. As news trickled through the campus a large group of students rushed to the spot and for several minutes it was a free for all till police finally managed to separate the two warring groups

When asked about the stack on the television crew today Kidwai said, “We really regret this unfortunate incident but the Republic TV team showed have shown more discretion and certainly had no business to adopt such an offensive stance while dealing with students. " Videos in circulation show the university authorities initially pleading with the television crew to take permission and not make the situation worse. In another video even the police is seen pleading with a screaming woman employee of the TV channel to calm down, and take permission as the situation was tense.

Heavy police and the Rapid Action Force have been posted near the boundary of the campus.

Hundreds of students including girls are presently sitting on a dharna inside the Sir Syed gate which has been locked from inside. They are demanding action against Ajai Singh and other ABVP activists for trying to barge into the campus and trying to" ignite communal passions " within the campus.

The AMU authorities and leaders of students union have also filed complaints at the civil lines police station against the television channel crew and the ABVP activists . However till the time of filing this report no FIR has been lodged . SP city Dwivedi told newspersons that a counter FIR filed by AMU would be filed once relevant facts were ascertained.

AMU student union leaders told newspersons that only an independent high level probe could reveal whether the entire incident was " orchestrated to mount further pressure on AMU for the polarisation of votes in the run up to the parliamentary elections."

The AMU teachers association has passed a resolution condemning the booking of 12 university student leaders under sedition charges . AMU teachers have urged the President of india who is also the university's visitor to take suo-motto cognisance of this step of the state government so that this grave charge is not misused here and elsewhere in the country. 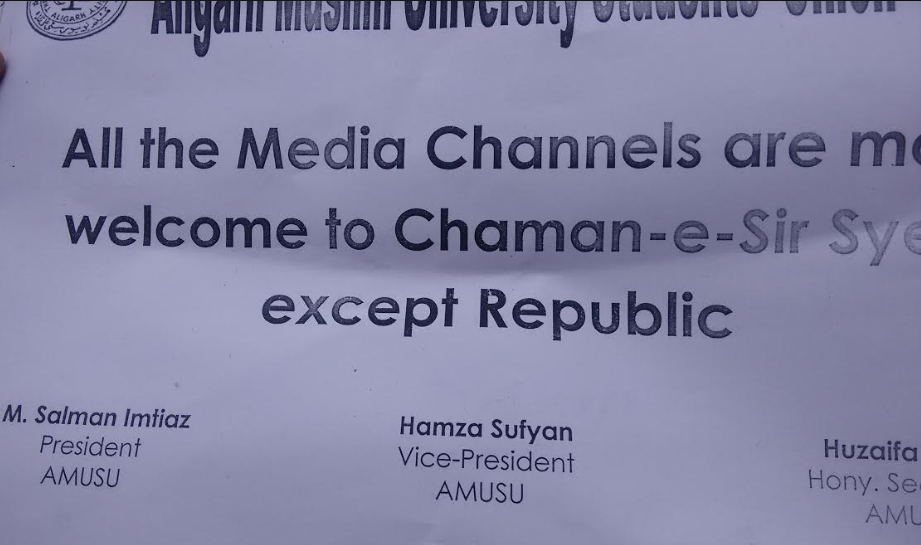