India Strikes Across LoC: The Story Till Now

This is a developing story and will be updated

Indian military aircraft crossed the Line of Control, entering Pakistani airspace early Tuesday morning. The Indian media provided the first account of India’s version, quoting sources saying that the Indian Air Force carried out strikes on a terrorist camp across the LoC, and that the mission was “100 percent successful.” The Ministry of External Affairs confirmed this later. The Pakistani account differs entirely, with a military spokesperson saying that Indian jets were beaten back and that there was no damage nor casualties.

The action by the IAF comes as tensions between India and Pakistan escalate following the terror attack in Pulwama that killed 44 CRPF personnel. Pakistani Prime Minister Imran Khan responded to the attack with a strongly worded promise to retaliate if India were to initiate military action.

The Indian media has quoted sources confirming that over 200 people were killed, and that terror launch pads across the LoC in Balakot, Chakothi and Muzaffarabad sectors were “completely destroyed.”

A statement by India’s Foreign Secretary confirmed the news reports. “In an intelligence led operation in the early hours of today, India struck the biggest training camp of JeM in Balakot. In this operation, a very large number of JeM terrorists, trainers, senior commanders and groups of jihadis who were being trained for fidayeen action were eliminated. This facility at Balakot was headed by MAULANA YOUSUF AZHAR (alias USTAD GHOURI), the brother-in-law of MASOOD AZHAR, Chief of JeM,” Foreign Secretary Vijay Gokhale said.

“The Government of India is firmly and resolutely committed to taking all necessary measures to fight the menace of terrorism. Hence this non-military preemptive action was specifically targeted at the JeM camp. The selection of the target was also conditioned by our desire to avoid civilian casualties. The facility is located in thick forest on a hilltop far away from any civilian presence. As the strike has taken place only a short while ago, we are awaiting further details,” the foreign secretary added. 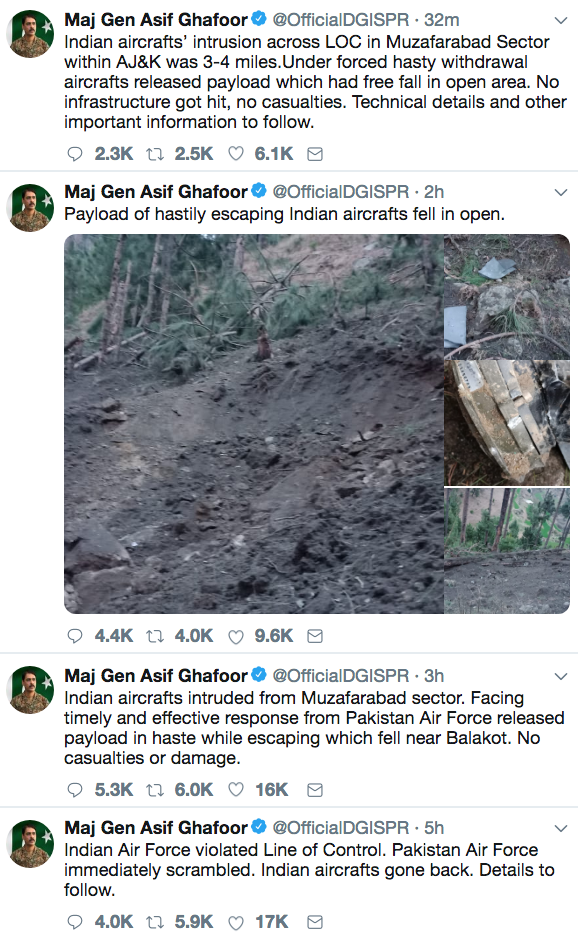 The strikes have added to tensions in the region. India's politicians have rallied behind the air force action, with Congress President Rahul Gandhi tweeting: “I salute the pilots of the IAF.” Delhi Chief Minister Arvind Kejriwal tweeted: "I salute the bravery of Indian Air Force pilots who have made us proud..." Samajwadi Party leader Akhilesh Yadav tweeted, “I salute the Indian Air Force and indeed all our Armed Forces. Congratulations @IAF_MCC.” 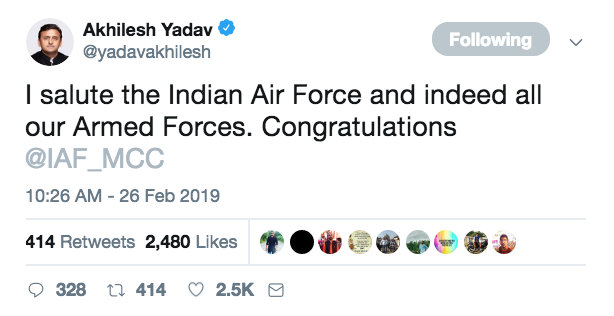 Some have expressed concern regarding Pakistan’s response. Jammu and Kashmir National Conference chief Omar Abdullah said: "The problem now becomes PM Imran Khan's commitment to his country - "Pakistan will not think about responding, Pakistan WILL respond". What shape will response take? Where will response be? Will India have to respond to Pakistan's response?"

News of the strikes made international headlines. A BBC report notes: "Pakistan's military has accused India's air force of violating its airspace, and says it scrambled jets in response."

An Indian defence official told Reuters they had "no information".”

“A 'payload' was dropped in the area from one Indian airplane, but no casualties or damage were reported, said the spokesman, Maj. Gen. Asif Ghafoor. Jets from Pakistan confronted the Indian aircraft, he said…”

“In recent days, residents of the area have fled as hundreds of Kashmiris have been arrested and Indian troops have moved more troops into the area. But analysts have said tensions between the two nuclear-armed rivals are unlikely to erupt into full-scale war.”

Meanwhile, the hashtags #Surgicalstrike2, #IndianAirForce, #IndiaStrikesBack along with #Balakot, #airstrike, #mirage2000 (an IAF fighter-bomber) were trending on Twitter.

(This is a developing story)