Mulayam Singh From Mainpuri Signals Truce Between Father and Son

NEW DELHI: Ahead of the Lok Sabha elections, Samajwadi Party has declared its first list of candidates that includes party patriarch Mulayam Singh. This is the first indication that all is well between him and son Akhilesh Yadav, despite his brother Shivapal Singh Yadav’s claims to the contrary.

Mainpuri is a safe seat for Mulayam Singh Yadav that he has won consecutively since 1996. In 2014, he fought from both from Mainpuri and Azamgarh but chose to give up Mainpuri where his winning margin, even in that almost one sided election, remained over 3 Lakh votes. The seat was later won by Tej Pratap Singh a member of the Yadav family.

Located North –East of Agra Mainpuri forms the ancient legendary region of Lord Krishna’s land called Braj. With 35% Yadav and more than 10 %Muslims, the demography aptly suits the MY (Muslim Yadav) social engineering of SP and remain a primary reason why BJP has not won this seat since 1952 in Krishna’s land. BJP failed to come even close to winning this seat even during high levels of polarisation after the Babri Masjid demolition in 1992, and again the Modi wave in 2014.

The BJP’s strategy largely for the seat has aimed at a consolidation of the Thakur, Brahmin, Lodhi , Non Jatav Dalits votes with a split in the Muslim vote. However, even in the 2017 Assembly Elections that hit the SP hard, and brought the BJP in power with one of its best performances, Mainpuri resisted the wave. And the Samajwadi party won four of the five Assembly segments here despite the BJP carpet bombing that send all its top leaders, including Rajnath Singh, Uma Bharti, Keshav Maurya and Kalyan Singh to campaign against the Yadav’s here.

The coalition between the SP and the Bahujan Samaj party now will make it even more difficult for the saffron outfit. And if the past statistics can play out again Mulayam Singh might cross the 80% vote share here.

Combined vote share of SP and BSP in Mainpuri, a look at last three General Elections. 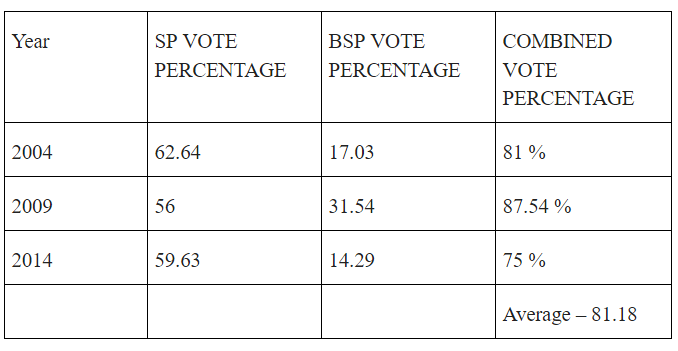 *The table does not include the results of bypolls on these seats as BSP did not contest in 2014 bypolls neither did it support anyone.

According to party insiders the reason to field Mulayam Singh Yadav from the safest Samajwadi bastion even when he has faded out of active politics over two years now after an open feud with his increasingly popular son, is to neutralize Shivapal Singh Yadav who has floated another political party in the state. The message to be sent out to party workers through fielding Mulayam Singh from Mainpuri is that the founder retains the position of patriarch in the organisation. And makes the Shivpal Yadav against Akhilesh Yadav redundant.

“There are several reasons for fielding Mulayam Singh Yadav from Mainpuri yet again. The first one is to give a sound message that Akhileshji continues to consider Mulayamji as the party patriarch and there is no personal feud between them. Second is to ensure that party does not have to work very hard in winning a seat for him from any other constituency since Mulayam Singh himself is not in the best of his health. And also make sure that Shivpal Singh Yadav, does not cause any dent in the core support base of the party and old time SP workers considered loyal to the founder of the party,” a national spokesperson of the party and a leader considered to be in close rings of Akhilesh Yadav explained to the Citizen over phone from Lucknow.

It is pertinent to mention here that Akhilesh Yadav himself has been very been very tactful in years on all questions on his relationship with the party patriarch and his father. All through he has built into the statue of ‘Netajii’.Contrary to this Mulayam Singh on the other hand has openly been openly critical of his son and is said to be not very happy with the 38-38 seat sharing formula with Mayawati. Also a week before he had baffled his party by saying in Parliament that he hoped to see Narendra Modi being reelected as the Prime Minister again.

Apart from identities and caste composition, other electoral issues that have dominated the Mainpuri discourse are making it a tourism hub, expanding rice mills, electrification of all villages.

However, locals of the district believe that not enough has been done here in terms of development even after it being the home turf of Mulayam Singh. According to a resident of Mainpuri, village more than half a dozen of villages are still waiting electrification and despite it being the largest market of garlic in India, no industry was set up to exploit the potential of the crop. Neither has a Milk production unit been set up even after Mainpuri was declared a major milk producing district. 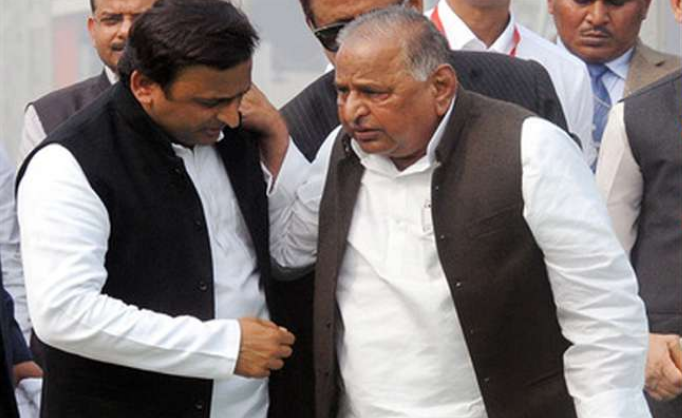