#TCVotes - Earlier versions of Surya were champions of media freedom, but no longer

In an interview with NDTV Surya said, “I don't think I would have done things differently. I am like any 26, 27, 28 year old. I think we all evolve in life. That's the reason I am not deleting the tweets that people are putting out of context and trying to make a scene out of. The tweets reflect that I am a thinking guy that I deliberated, debated and thought about it.”

However, the thinking of Chowkidar Tejasvi seems to be short-sighted and aimed at achieving his own advance, rather than standing for his tweeted values.

In March 2015, Indian government obtained a court order banning the screening of the forensic documentary India's Daughter - a documentary about the gang rape and murder of a 23-year-old medical student in 2012.

Home minister Rajnath Singh had asked the BBC, the Ministry of External Affairs and the Information and Broadcasting Ministry to ensure that the documentary 'India's Daughter' was not broadcast anywhere in the world.

Then Parliamentary Affairs minister, M.Venkaiah Naidu, said: “We can ban the film in India. But this is an international conspiracy to defame India. We will see how the film can be stopped abroad too.”

Interestingly during that time Tejasvi Surya was at the forefront of calls to ‘revoke’ the ban on India's Daughter and calling on the Modi government to stand up for freedom of expression.

Then, back in February 2015, Praveen Togadia, a leader of the Vishwa Hindu Parishad, was to address a meeting in Bengaluru. But fearing he would make a provocative speech and unrest would follow, the police put a ban on his coming to the city.

The ban didn’t go down well with Chowkidar Tejasvi. Taking his anger to Twitter, he tweeted about the importance of freedom of speech, expression and freedom of movement in India. 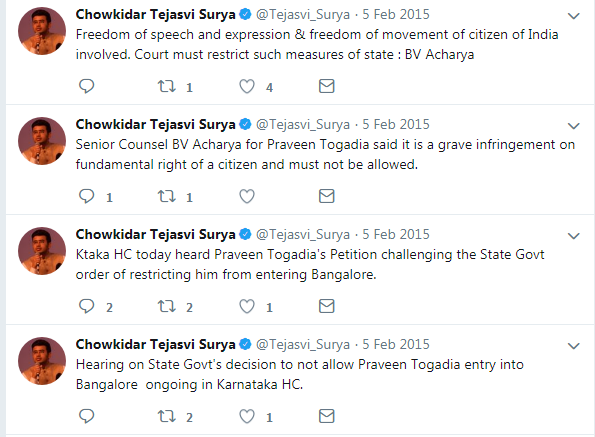 In 2014, authorities in Delhi banned US-based taxi firm Uber from operating in the Indian capital after one of its drivers was accused of raping a passenger. Chowkidar Tejasvi at that time tweeted, “Banning is what I don't comprehend… Banning is a knee jerk”. In a series of tweets he also asked “Is chopping your nose off, the solution to a running nose? Government response in banning Uber is akin to that..” 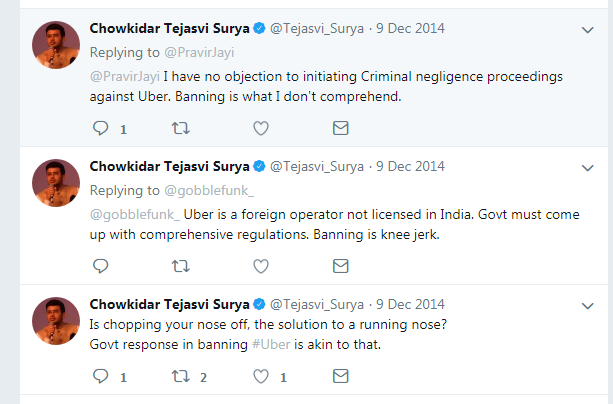 Almost as soon as his candidature was announced Surya’s counsel moved the city civil court in Bengaluru seeking a permanent injunction order to bar media outlets from publishing defamatory and derogatory publications against him.

An ex parte order is given after only one side has been heard. The judge has asked the media houses named to reply to the notice before May 27.

As reported in the local media, Tejasvi Surya’s counsel Sudharshan Suresh, said that such an injunction was a necessity following the nature of news coverage about his client following his nomination.

“There have been many defamatory and scandalous articles being published all over against him. So we had to get this injunction filed. There was news about him being a radical person, anything that would affect or tarnish his image within the right-thinking people in the society. That is just not done. Just after he filed his nomination, people started spreading canards about him.”

And hence the hitherto champion of freedoms went to the courts for a gag order on the media.

Tejasvi Surya has been fielded over Tejaswini Kumar, wife of late Union Minister Ananth Kumar who held the Bengaluru South seat until his demise last year.

Ananth Kumar was elected to the Lok Sabha for six times from the Bengaluru South constituency.

After the decision on his candidature was taken, Surya said, “It is shocking to all of my supporters and also to me. At the same time, I have been telling them and to me that it is very important to show that we are a party with a difference. This is the time to show our maturity and to work for the country. Let's not think of small things and our bigger goal is nation first.”