The Ministry of Elections

Our criminal politicians and their corporate overlords meet little resistance

NEW DELHI: What were only murmurs after the BJP’s sweep in the Uttar Pradesh assembly elections – rumours as video after video surfaced of EVMs all malfunctioning in favour of the lotus – tentative signals when the head of the BJP’s IT Cell Amit Malviya tweeted out the Karnataka poll dates before the Election Commission could announce them – have grown of late into serious questions about the constitutional body’s ability to conduct free and fair elections.

The evidence suggests that the EC is the latest in a long line of state institutions to fall under executive control. Notwithstanding its feeble noises in the Supreme Court against this government’s lifting of caps on parties' corporate funding, and its opaque electoral bonds scheme, let us look at the areas where the EC actually has teeth, and whom it bites.

There is good data to show that the EC has been deleting the names of Muslims and Dalits from voter rolls at a disproportionately high rate. According to studies of publicly available data conducted over the past year by the Delhi-based Centre for Research and Debates in Development Policy and other organisations, as many as 180 million eligible Indian citizens had been left off the voter rolls.

The study suggests that the other eligible members of those households had been struck off the rolls. The method also shows that frequent changes of residence, poorer voter awareness and so on among Muslims and Dalits can’t have been the principal reason for this form of voter suppression.

Meanwhile, another analysis shows an unchanging deficit, election year after year, between the number of adult women expressed in Census records and the number registered on voter rolls. In 2014 this shortfall amounted to over 20 million or 2 crore women voters.

While the EC is not solely responsible for the patriarchal denial of women’s equality, such systematic disenfranchisement does raise the question: What are these voter rolls for? Why can’t the forms of identification necessary to get on the rolls, suffice simply to vote?

What is the corporate-political nexus doing with these large and endless databases of citizens (and non-citizens, nationals and anti-nationals) and their political, financial, physical activity? Why aren’t elections held on holidays to minimise the impact on daily wage earning voters? And so on.

The only thing we know for certain is that NaMo TV has been launched, and you can’t get rid of it. The Print quotes unnamed Information and Broadcasting Ministry officials saying that no one applied for permission to set up this channel, which doesn’t have security clearance from the government and is thus illegal.

On a complaint from the Congress citing violations of cable TV laws, the model code, as well as sections of the Representation of the People Act 1951, the EC “sought a report” from the I&B ministry, which asked for time until today to reply.

The EC also issued a showcause notice to UP Chief Minister Ajay Singh Bisht who goes by the name Yogi Adityanath, for his comment terming the Indian military “Modi ji ki sena” or Modi sir’s army.

(At the same rally Chief Minister Adityanath also reportedly said that the Congress serves terrorists biryani. The thinking here is casteist: that Muslims are a small outcaste in the great Hindu hierarchy, with a specific food biryani, and a prescribed profession, terror: even as CM Bisht himself seeks to achieve castelessness.)

Then the EC received a complaint from the CPI(M) about PM Modi’s speech on “Mission Shakti”, for it made a policy announcement boasting of technology the USA tested in 1959, but it found the complaint to be without merit.

Another CPM complaint about the prime minister’s attempt to “rouse communal passions” in his speech at Wardha, where he appealed to “Hindus” to vote out the Congress, is under consideration.

The EC has taken no action against the various Modi merchandise being plugged by the state: NaMo TV, Doordarshan tweets urging people to watch the PM’s address, Air India boarding passes with the PM’s face on them, and on and on.

Prompt and strict action was taken, however, against economist Jean Drèze for a sit-in demanding food security. One of the stories put out by police was that Drèze had violated the model code of conduct – but as he is not a party worker, candidate or government official, it is unclear how.

An EC “flying squad” also swooped in on the publishers of a book that alleges high-level corruption in the Rafale deal. It is written by S.Vijayan and is titled Naatai Ulukkum Rafale Paera Oozhal (Rafale: The Scam That Shook the Nation) and has since gone viral on WhatsApp. Again, the allegation was that the publishers violated the model code, which does not apply to ordinary citizens.

In both cases the police backtracked, and the EC has disowned responsibility. In the case of Vijayan’s book the flying squad has reportedly been relieved of duty.

And Chandrashekhar Azad Ravan of the Bhim Army, who is contesting against PM Modi in Varanasi, was arrested yet again last month, for alleged violations of the model code.

There was the EC’s sullen refusal in 2017 to allow members of the public to test EVMs for vulnerabilities. Only a strange and restricted “EVM hacking challenge” was permitted. Calls for ensuring EVM reliability were made after videos surfaced in the media of computer engineers showing how EVMs could easily be tampered with after polling, to change the number of votes they had recorded for each candidate.

Earlier still, the EC led a fight in the courts against instituting a paper trail of votes that could be used to verify disputed results, as is the case in EVM setups across the world. The EC lost that battle, and is now back in the courts, to argue that the audit it will conduct of these slips of paper, VVPATs, will be so small as to be statistically meaningless, and won’t really confirm anything. The Supreme Court is currently hearing a writ petition on the issue filed by citizens including former government officials.

Most candidates and parties have made mockery of the sworn affidavits they are supposed to file with the EC along with their nomination. And it is hard to think of a recent case where irregularities or discrepancies in these sworn declarations were actually investigated, discovered, and punished with the candidate’s disqualification.

The most infamous example perhaps is Narendra Modi’s, who forgot he was married across affidavits filed in elections in Gujarat, remembering Jashodaben Narendrabhai Modi only when it was time to enter the Lok Sabha. Modi also famously declared he had a Master’s degree from Delhi University in “Entire Political Science”.

The first discrepancy went uninvestigated. Enquiries into the latter proceeded independently of the EC. RTI queries were turned down, university attendance records for the year 1978 could not be found, the Chief Information Commissioner who had allowed their perusal was soon told he could no longer hear complaints relating to “Human Resource Development” – and in due course Finance Minister Arun Jaitley and BJP President Amit Shah could be seen on TV, displaying the degree certificate – in Entire Political Science. 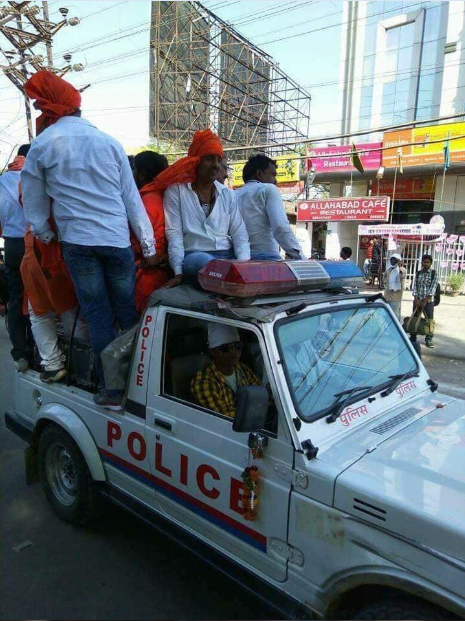 BJP workers being ferried in a police vehicle