BATHINDA: Long before the elections were announced it was evident that religion would be one of the core issues in the Lok Sabha battle in Punjab. This is what is happening to the hilt in the all important constituency of Bathinda which is the home turf of one of Punjab’s most powerful political family - Badals.

The series of incidents of sacrilege of holy texts that started in 2015 along with police firing on innocent protestors at Kotkapura and Behbal Kalan are major issues in Bathinda. The report of the Justice (retired) Ranjit Singh Commission set up by Congress Chief Minister Amarinder Singh in 2017 to probe the issue put the Akalis, particularly Badals, in the dock. It stated that the action in Kotkapura was in the knowledge of Parkash Singh Badal.

The report was tabled in the Punjab Assembly and led to the constitution of a Special Investigation Team (SIT) to further probe the matter. But the transfer of a key SIT member Kunwar Vijay Pratap Singh just when the campaigning for the Lok Sabha began on the orders of the Election Commission added to the Badal woes. Vijay Pratap was transferred on the basis of a complaint lodged by the Akali leadership for an interview that he had given to a channel that allegedly had political overtones.

The Akalis have stood discredited not only on the issue of desecration of holy texts and police action on protestors but also on the Akal Takht’s decision to grant an apology to the now jailed Dera Saccha Sauda chief Baba Gurmit Ram Rahim in 2015 for blasphemy. 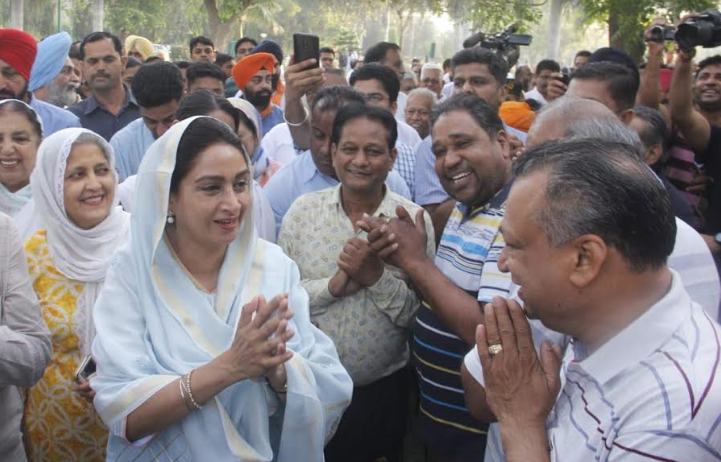 This apology was later withdrawn following public outrage. With supreme Sikh institutions like Akal Takht and Shiromani Gurudwara Prabandhak Committee (SGPC) being under Akali Dal influence, the SAD has been facing public wrath. Incidentally, the majority of those arrested for incidents of sacrilege were supporters of the controversial Dera.

Harsimrat Badal was greeted with black flags by angry residents of Har Raipur village. Her brother and senior Akali leader Bikramjit Singh Majithia who had come to campaign for her was also subjected to the same treatment at Aklian village. In many villages the residents are not keen to have any politician coming to campaign.

Hard line Sikh leaders like Dhyan Singh Mand who had held a six month long Dharna at Bargari last year seeking action those responsible for sacrilege and police firing that had led to two deaths at Behbal Kalan, are now leading public marches. The first march was organized from Kotkapura to Damdama sahib and the second is to be organized from Bargari to Badal village.

With their back to the wall on this issue, the Akali leadership is trying to counter the attack with a campaign against Amarinder Singh. They are also trying to revive the memories of Operation Blue Star that marked the assault on the Golden Temple by armed forces in 1984, saying that was an established case of sacrilege against Sikhs.

The two parties are also engaged in attacks and counter attacks on the development of Punjab and Bathinda. 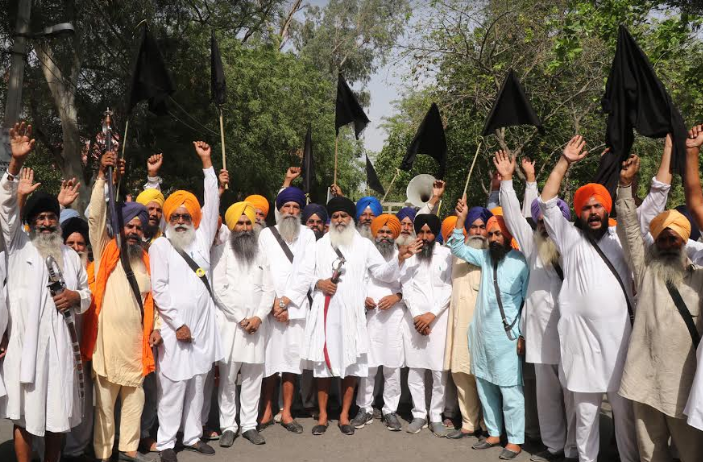 “The election here is about my sacrilege versus yours and my development versus yours,” summed up a political observer based in Bathinda city.

The people are annoyed with both the Akalis and the Congress that are ironically the frontrunners in the contest in Bathinda seat that covers the districts of Bathinda and Mansa along with Lambi in Muktsar district.

This reporter came across Baldev Singh of Katarsinghwala village when he went to gauge the mood of the rural residents. “Both the Badal family and Amarinder have cheated us. Tell me how can there be a case against unidentified police personnel who shot protestors at Behbal Kalan in broad daylight? Do they think people are fools? Who were the Badals to utilize Akal Takht to grant an apology to Dera Saccha Sauda chief for their political gains? If we vote for Harsimrat it would mean a vote for Prime Minister Narendra Modi who has done nothing for a common man except telling fairy tales in his Mann ki Baat. And I also do not support Amarinder since he has not delivered on any of the promises that he made,” he said.

“We are just sick of these parties. Nothing is done for us whosoever is in power,” said Chhinder Singh, a villager who had come to sell his wheat produce at the local grain market.

In fact there is a wide perception that Bathinda contest is a fixed match. Many people believe that the Congress has gifted the seat to the Badals. They say that what was the need for the chief minister to constitute a SIT when all that was need top e done was registration of a criminal case. People are saying that SIT is plain delaying tactics.

But the manner in which the Congress candidate Warring has been campaigning counters this perception. Warring who is a sitting MLA from Gidderbaha has made it a close contest from what was being seen as a one sided affair when the candidatures were announced. Both his wife Amrita and he are addressing 35 to 40 public meetings daily across the villages trying to convey that the contest in Bathinda is between a common man whom he represents and the ‘rich and arrogant Badals’. Both of them are excellent political orators.

Warring contesting against Harsimrat Badal is politically a win win situation for him on all counts. Observers say that he is the only Congress leader who volunteered to take on a heavyweight like the Minister on the Badals own home turf. Other leaders like present state finance minister Manpreet Badal, Navjot Kaur Sidhu and state cabinet minister Vijay Inder Singla had refused to contest from the seat.

“If he manages to win, he will shoot into limelight just like Jagmeet Brar when he had defeated Sukhbir Badal in Faridkot in 1999. In case he looses he will go down as a martyr who had given a fight on behalf of the Congress,” said an observer.

Harsimrat Badal and the Akalis have been trying to woo the electorate on the development plank reminding them that it was during her tenure as an MP that Bathinda got a functional airport, an All India Institute of Medical Sciences (AIIMS) and a Central University. Her supporters are trying to painting Warring as an ‘outsider’ saying that she is a tried and tested candidate.

The entry of Khaira who hails from Doaba region and had won the assembly polls from Bholath is another interesting dimension to the Bhatinda contest. Khaira had left Congress to join AAP only to leave the party after chief Arvind Kejriwal apologies to Akali leader for having accused him of being involved in drug trafficking in Punjab.

Khaira was also removed from the post of the leader of opposition. He went on to form the Punjab Ekta Party that is a component of the Punjab Democratic Alliance.

Therumour being spread is that Khaira is being clandestinely supported by the Akalis so that the anti- vote is divided. Khaira’s poll managers deny this. “He has come to Malwa region to contest because this was the region where AAP had got maximum response in the assembly polls. This is the area that wants an alternative to the Congress and the Akalis. That is why we want him to win from here,” one of Khaira’s key campaign managers at his election office in Bathinda city said.

The commoners in the city are largely siding with Harsimrat Badal saying that the family has nurtured the constituency well. “The roads are very good. The issue of water scarcity has been largely addressed in the city with a new pipeline network. The Amarinder government has done nothing when it came to providing jobs or finishing off the drug menace,” said Jaspal Singh, a rickshawpuller.

But many feel that even the ‘partial’ loan waiver given by the Congress regime to the farmers is a major achievement. “Amarinder was the first in the country to go ahead with the loan waiver even if it was partial or small. It is still a beginning in the right direction in a state that has been witnessing farm suicides and farm distress,” said a farmer at the Grain Market. Ironically, one of the farmer widows is in the fray just to make a statement on the issue.

At the same time, important issues like high incidence of cancer in the area, depleting water table and water pollution are nowhere to be seen in the political discourse.

While Harsimrat Badal is a heavyweight, Warring is an underdog capable of springing a surprise. At the same time Khaira’s performance will speak a lot about the utilization of space available for a third force in Punjab that has existed for a long time.

Although AAP had won five of the nine assembly constituencies falling under the purview of this parliamentary constituency in the 2017 assembly polls, its downslide marked by a split and departures of leaders has left it rudderless. Amid such complexities Bathinda is definitely a seat to watch for in Punjab during this poll battle.