GURDASPUR: As one moves across the hot and dusty villages around Dera Baba Nanak in Gurdaspur Lok Sabha constituency it is amply clear that the politician ruling the hearts of the people is none other than Pakistani Prime Minister Imran Khan. The fight for the parliamentary seat is however, between Sunny Deol, the Bollywood star fielded at the last minute by the Bharatiya Janata Party (BJP) and Punjab Congress chief Sunil Jakhar.

The Kartarpur corridor rules the minds of the people although other issues are being raised in the campaign as well. The voters here are not willing to give credit for the Kartarpur corridor to Prime Minister Narendra Modi. For them the heroes are Imran Khan and cricketer turned politician who is now Minister in the Punjab government Navjot Singh Sidhu.

“Imran initiated the move after Sidhu’s request and knowing that it would become an issue ahead of the polls Modi was left with no option but to play ball,” was the consensus between the voters this reporter spoke with in Dera Baba Nanak, right up to the spot where the work is on for completion of the corridor. The people are annoyed at the ‘slow pace’ of work on the part of the Modi government and point to the fast execution of the project on the other side.

Kartarpur Sahib is the Gurudwara on the other side of the India-Pakistan border that has immense importance in the religious sentiments of both Hindus and Sikhs as this is where Guru Nanak spent the last days of his life. For the Indians the anguish of losing the Gurudwara to Pakistan as part of the Parition boundaries was further exacerbated by the fact that it was visible, being just four kilometres away. Those who did get the visas to visit the gurudwara, had to go from Lahore after crossing the Wagah border.

“The corridor is coming up with the blessings of Guru Nanak and Imran is getting the good name for it as he has become the medium,” said Ajit Singh, a villager who had come to visit Gurudwara Darbar Sahib on the Indian side that houses Bauli Sahib, a well near which Guru Nanak used to sit and also use its water for irrigating the land.

“All my life I have heard about the Baisakhi fair at Kartarpur Sahib and the wrestling matches there from my family that had migrated from a neighbouring village on that side at the time of partition. I hope to visit the place once the corridor opens,’ said Rattan Singh of Haruwa village on Indo-Pak border. 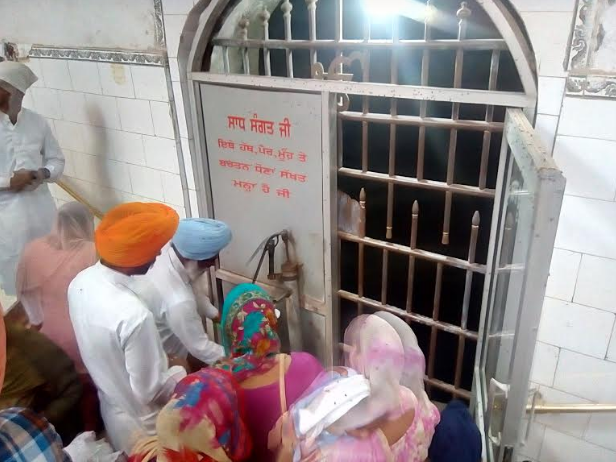 Everyone is talking about Imran Khan in a positive light while showering blessings upon him. This in itself makes it clear that Kartarpur Sahib is a very important poll issue.

India Pakistan relations otherwise too have a bearing on the politics in the constituency as the people have neither forgotten the terror attack in Dina Nagar in 2015 where seven people, including four police personnel were killed along with three civilians. Nor have they forgotten the attack on the Pathankot air base in 2016. They blame the failure of Indian intelligence agencies for what happened and are also critical of the Modi government for allowing Pakistani officials to visit the air base.

Yet, the BJP candidate is well placed in the contest that may end in a photo finish. This is for no other reason other than that he is a Bollywood personality. He has been drawing huge crowds in his road shows. Politically he started as a disaster when he admitted, “I do not know much about politics but I am a patriot.”

He has been visiting religious sites and regaling the crowds with the dialogues from his films many of which have been high on jingoism. These include films like ‘Border’ where he played the role of a war veteran from 1965 Indo-Pak war and ‘Gadar-Ek Prem Katha’ where he played a Sikh driver who goes to Pakistan to bring back his Muslim wife after indulging in all sorts of stunts including uprooting of hand pumps.

Gurdaspur is one of the three seats being contested by BJP in the state where it has an alliance with the Shiromani Akali Dal (SAD) that is contesting the remaining ten. This is a seat where the Hindu voters are a bit more than Sikhs in number.

Incidentally, there is a sizeable Christian population also in the district that amounts to around eight per cent. The Aam Aadmi Party (AAP) has fielded Peter Masih from the community on this seat. Another interesting place in this constituency is Qadian which is the headquarters of the Ahmadiyya sect of Muslims who are also present in a moderate number. 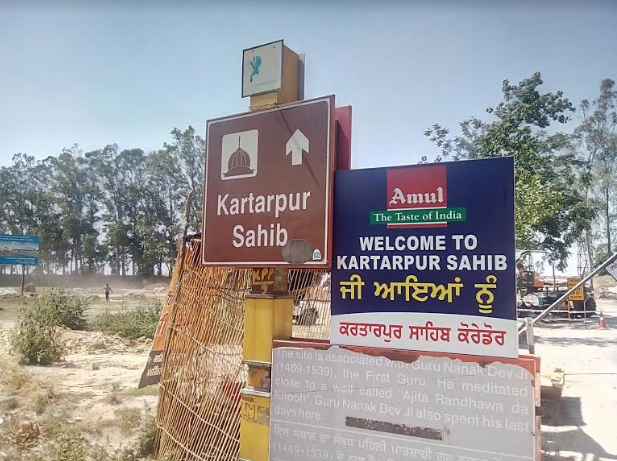 “We do not seek anything special for the community. But it is high time the politicians do something for creating jobs. Secondly, the political discourse should not be brought to the level of spreading hate against communities. The kind of speeches the leaders are making across the country is creating an atmosphere that is not good for the country as even children are exposed to such hate. The country must have an atmosphere of peace so that it can develop,” Mohammed Hamid Ahmed Quasar, a representative of the Ahmadiyya community, told this reporter during a visit to Qadian.

“Sunny Deol is the second Bollywood star that the BJP has fielded from this seat. Earlier the party had brought in Vinod Khanna who won on this seat on four occasions from 1998 when he had defeated Sukhbans Kaur Bhinder who was a five time winner on Congress ticket. This was traditionally a Congress bastion till Khanna entered,” says political observer Kamaljit Singh Kamal.

Khanna is known as ‘Pullan wala Khanna’ (Khanna of Bridges) after he initiated the process for building two bridges on Ravi and Beas rivers at Mukerian and Kathlour addressing a long due demand of the local residents. This was the reason for his popularity despite the fact that he was hardly available in his constituency.

Vinod Khanna lost the 2009 polls to Partap Singh Bajwa of the Congress in 2009 only to return victorious in 2014. The seat had fallen vacant after Khanna’s demise in 2017 and it was Jakhar who had won the by-polls a few months later by a margin of 1.93 lakh votes defeating Swaran Singh Salaria, a Mumbai based businessman from this constituency who was fielded by the BJP overlooking Khanna’s wife Kavita Khanna.

Kavita had expressed her displeasure over the BJP fielding Sunny Deol this time and denying her the opportunity for the second time but later agreed to work for the party under Modi’s leadership.

Jakhar is now facing a tough battle to retain his seat. People, particularly the youth are swayed bySunny Deol who enjoys the status of ‘Rajnikant of Punjab’. Along with his father Dharmendra who is a Bollywood icon from Sahnewal in Ludhiana district and his actor brother Booby Deol, there is no other Bollywood personality from Punjab to match their popularity.

“Jakhar on the other hand is a seasoned politician who, despite coming from outside like Sunny Deol, understands what people want. He has been working through the Congress MLAS that represent seven of the nine assembly constituencies falling under Gurdaspur Lok Sabha seat. He has also been raising the issues of Gurdaspur in the parliament,” says Kamal.

The people of the area are agitated over the fact that none of the parties have deemed it fit to develop leadership at the local level that could represent them in Parliament.

In terms of the poll issues it is unemployment that stands at number one. Besides being a border area, Gurdaspur was also among the most hit districts by the militancy in the 1980s and the impact continues till date.

Then of course there is the menace of drug abuse which is rampant in certain pockets. The area also has the problem of farm distress. Majority of the farmers are debt ridden and do not have the capacity to repay loans. “It is their sheer nature of defiance that does not lead them to take drastic steps like suicide.

Otherwise they keep on taking loans to meet their needs ranging from farming to providing good education for their children and marriages of their wards,’ said Kamal.

Lack of employment opportunities is driving people to foreign lands. This is evident from the number of IELTS coaching institutes that have been mushrooming here like the rest of the cities in Punjab.

“Majority of the youth is looking forward to going abroad. The preference is Australia, New Zealand, Canada and United States of America. Many also settle for employment in Dubai and Saudi Arabia,’ said Tejinder Singh, a resident of Indrawal village.

Jakhar has been talking of bringing large scale industry to the area for addressing the employment concerns. He has also been taking up the farmers’ issues during his stint as the local MP and is promising to address the concerns.

Sunny Deol on the other hand has not been talking about specifics. He has rather stuck to making general promises telling people that he would address all their concerns.

Many people have an altogether different take on the poll scenario. “Nobody is going to do anything for the masses. The entry of film stars just adds to the colour of the elections. If Sunny is here there would be other film stars including Dharmendra would come to campaign for him and we would get an opportunity to see them closely,” said a juice seller at Batala who had returned after attending a road show of the actor.

While the youth is talking about Sunny Deol, the elders point out that Jakhar is more seasoned as a politician and understands the constituency well.

They point out that the BJP has made its tried and tested move to win this seat at all costs by fielding a Bollywood actor who is immensely popular in Punjab.

It remains to be seen whether ‘Sunny Paaji’ as he is known can deliver for the saffron party with his campaign marked by jingoistic dialogues or the people would once again back the well entrenched politician Jakhar.

It is a contest marked by an electric high pitched campaign and crucial for the BJP whose fortunes have been on the downhill since the recent assembly polls in 2017 where it was reduced to winning just three of the 23 seats contested. This was followed by a loss in the Gurdaspur by-poll. 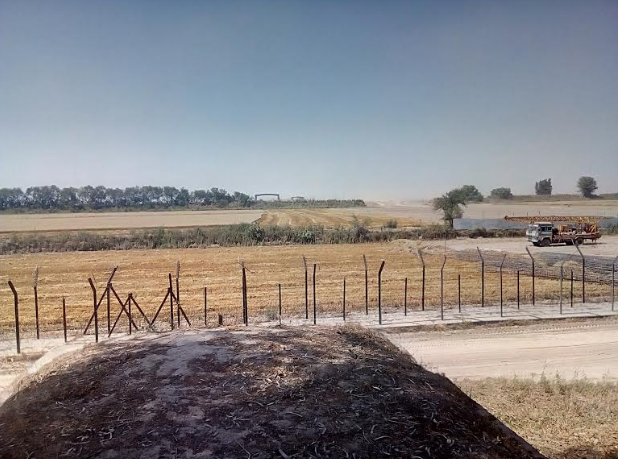