Date palm trees abound in the Niyamgiri hills of the Indian state of Odisha.

RAYAGADA (IPS): Scattered across 240 sq km on the remote Niyamgiri hill range in the eastern Indian state of Odisha, an ancient tribal group known as the Dongria Kondh have earned themselves a reputation as trailblazers.

Having fought – and won – a decade-long battle with a British mining giant that invested close to a billion dollars in a bauxite extraction operation in this mineral-rich area, the Dongria Kondh set an example in 2013 to millions of tribal people around the world that David versus Goliath-style confrontations can still be won by the underdog.

Now, the indigenous group is once again at the forefront of a global problem – the twin issues of hunger and deforestation – as they continue to nurture an ancient way of life despite a wave of destructive development that is threatening their traditional and sustainable farming practices. 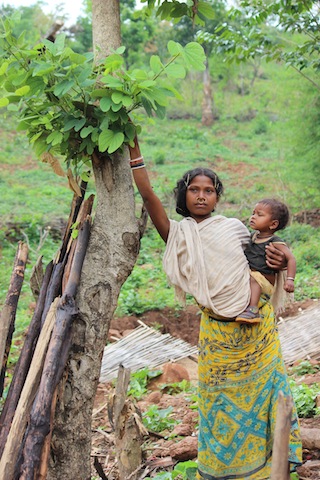 Here, a Dongria Kondh woman reaches for barada leaves, a vital source of iron for the community. Credit: Manipadma Jena/IPS

Numbering some 10,000 people, the Dongria Kondh believe the forests and hills to be sacred sites, and have for centuries lived in harmony with the land, with a single family harvesting an average of 130 kg of wild produce in a single year.

Their varied and nutritious diet, which includes over 25 species of plants, comes directly from the forests, while springs originating in the Niyamgiri hills provide fresh, clean water all year round.

But rampant deforestation for large-scale infrastructure projects, coupled with mono-culture plantations of fast-growing trees to supply timber and paper industries with raw materials, as well as mining activities, have reduced food availability for the Dongria Kondh and other indigenous groups by over 30 percent and increased their gathering time by 80 percent over the last 30 years.

Today, 55 percent of adults from the Dongria Kondh community are protein-energy deficient and 60 percent of school-aged children are malnourished.

The situation reflects a trend all across India, a country of 1.2 billion people, where some of the poorest and hungriest live in or around forests.

India is currently home to one-quarter of the 805 million malnourished people worldwide, as well as to a third of the world’s underweight children and nearly a third of all food-insecure people – most of them among the 275 million-strong forest-dwelling population of this vast country.

The irony of the fact that those living closest to readily available food sources are going hungry has not escaped the attention of policy-makers, with the United Nations spearheading efforts to protect forests due to their critical importance in alleviating hunger and mitigating the impacts of climate change, not just in India but worldwide.

With 1.6 billion people – including over 2,000 indigenous cultures – depending directly on forests for food, shelter, income and fuel, preserving these areas feeds directly into the U.N.’s sustainable development agenda, and could also play a role in the ‘Zero Hunger Challenge’, launched by Secretary-General Ban Ki-moon in 2012 in a bid to completely eradicate the scourge of malnutrition and food insecurity.

This is easier said than done, given that an estimated 13 million hectares of forests are destroyed annually, denying hundreds of thousands of people of their only source of food.

While this seems like a bleak trend, one need only look up at the Niyamgiri hills for a lesson on an alternative economic model, one based on community management and control of land and resources, rather than the rampant destruction of living ecosystems for profit.

Here in Odisha, the forest-food nexus meets the accumulated traditional knowledge of an ancient people, pointing the way to a horizon where hunger is a thing of the past, not the future. 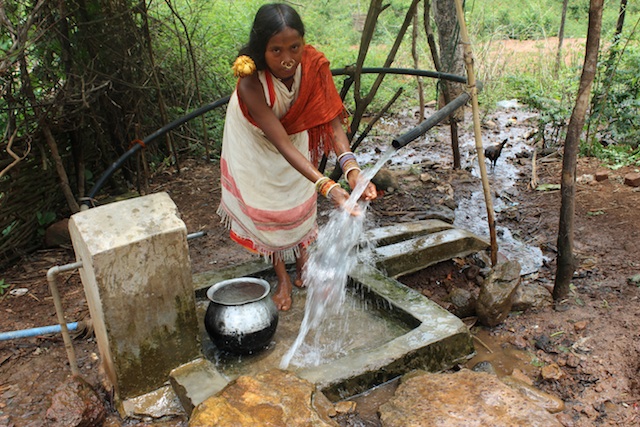 A major reason for the Dongria Kondh’s opposition to Vedanta Resource’s bauxite mining in the Niyamgiri Mountains in the eastern Indian state of Odisha was that it would destroy their numerous perennial hill streams. Here, a tribal girl washes at a pipe that gushes fresh water 24 hours a day. Credit: Manipadma Jena/IPS 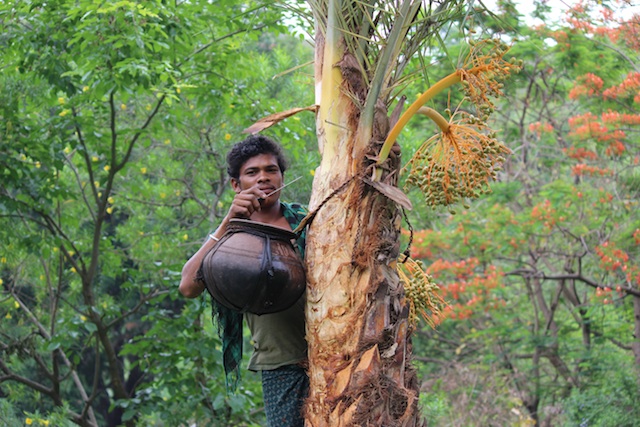 Date palm trees abound in the Niyamgiri hills of the Indian state of Odisha. The fruits contain antioxidants and Vitamin A, and the sap is collected and fermented to produce liquor. Credit: Manipadma Jena/IPS 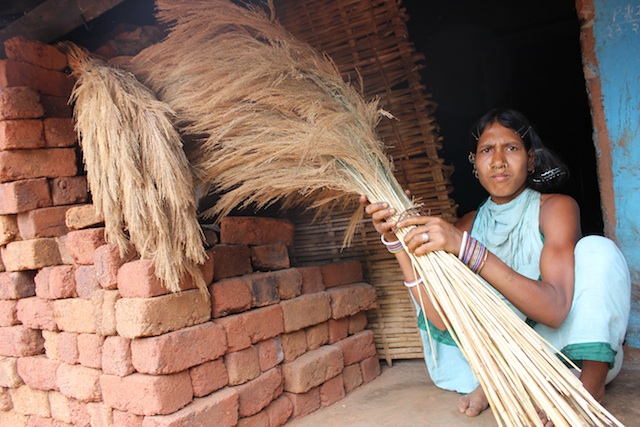 Tribal women collect fistfuls of ‘broom grass’ from the hill slopes of the Niyamgiri range in Odisha, India. Bundles tied together with hemp rope sell for 60 cents apiece in village markets, though urban traders get double the price. Credit: Manipadma Jena/IPS 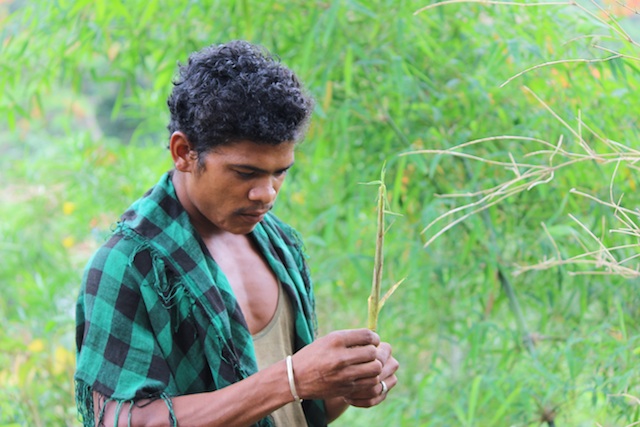 Rich in protein, young bamboo shoots are a delicacy among the Dongria Kondh tribal community in eastern India. The outer skin is boiled with salt and chilli as a source of nutrition. During the monsoon season, when the shoots are plentiful, members of the tribe earn an income from bamboo. Credit: Manipadma Jena/IPS 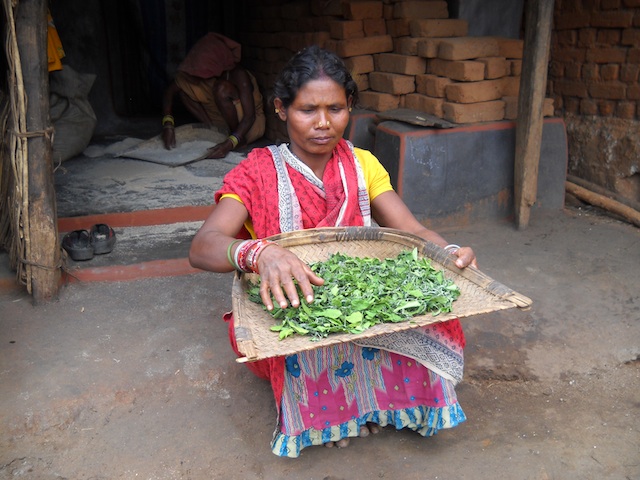 The ‘barada’ leafy green is sweet, easy to digest and rich in iron. Here, a tribal woman sun-dries the leaves so they can be stored for up to two months. Credit: Manipadma Jena/IPS 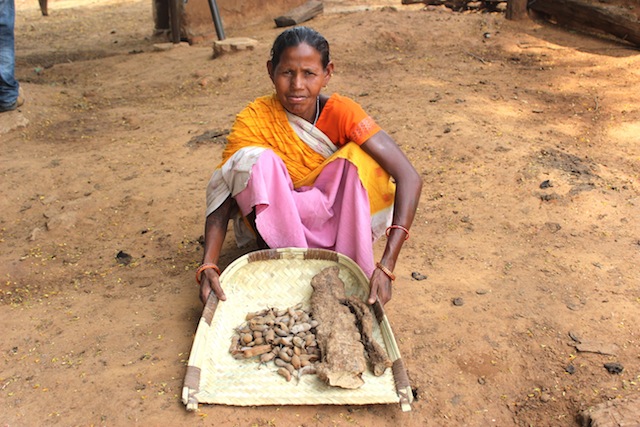 Women shoulder the lion’s share of forest produce collection. A typical day’s haul includes tamarind, which fetches a large part of a household’s annual income, and wild yams, a dietary mainstay during the lean months of August to October. Credit: Manipadma Jena/IPS 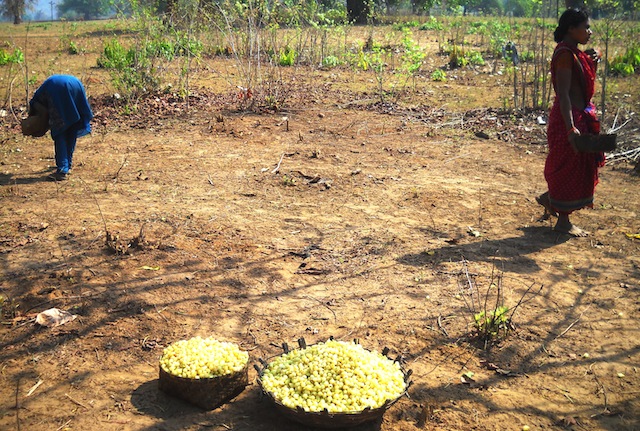 The highly valued mahua flowers are collected, dried and made into liquor. Its seeds yield oil that can be used for cooking. Among some tribal groups mahua paste is used medicinally to facilitate childbirth. Credit: Manipadma Jena/IPS 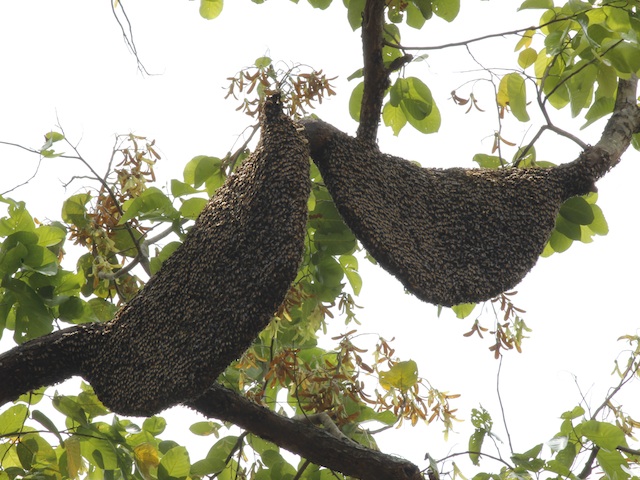 Honey is the Dongria Kondh’s most precious forest product, valued for its nutrition, medicinal properties and high returns from sale. Because the tribe manages and protects large sections of the Niyamgiri hills in the eastern Indian state of Odisha, hundreds of wild honeybee colonies can still be found here. Credit: Manipadma Jena/IPS 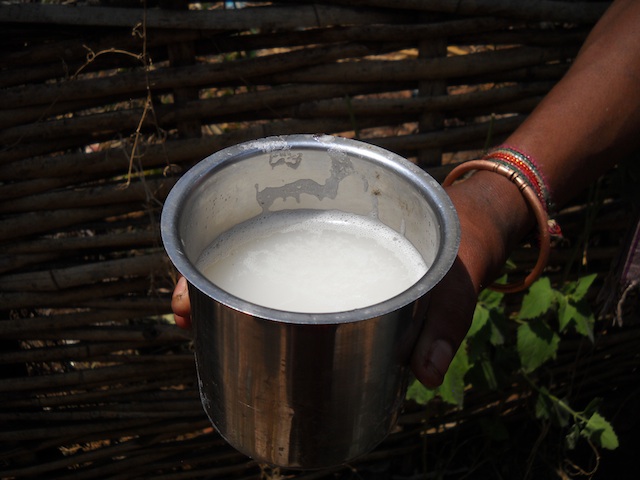 Freshly fermented liquor made from the sap of the Salapa palm tree is often used during rituals. This is one of seven trees considered a ‘must’ in the Dongria Kondh’s sacred grove. Credit: Manipadma Jena/IPS