Is The Search For A Legal Remedy A Terrorist Act Now?

A protest against the death penalty in Mumbai

John Dayal is a senior journalist who has been campaigning for human rights for decades. He was a member of the National Integration Council, and is amongst the many to have signed a petition to the President of India seeking commutation of the death sentence for Yakub Khan and opposing the death penalty. Disturbed and worried, he writes on the immediate aftermath of the Supreme Court verdict for The Citizen

NEW DELHI: I am deeply saddened at the court ruling, and within minutes of it, the dismissal of mercy petitions on behalf of Yakub Memon to the Governor of Maharashtra and possibly the President of India, going by media flash news-reports.

I am happy I signed the petition to the President for mercy for Memon and against the death penalty, and will do so again and again if I feel the due process of law has been short circuited.

I continue to oppose the barbaric concept of a death penalty which has never deterred determined criminals. I am ashamed and embarrassed as a citizen at the gloating I see on television channels. And I am not scared at the hate we have been targeted with on social media for signing the Petition. I wonder if this will expedite the process of justice for the victims of targeted violence against the citizens of India in 1984, 1993, 2002, 2008 and 2014.

But it should not be a personal matter, despite the Trolls, of social activists and others. For there is something deeper, more seminal in the discourse of the last one week or so, played out in the courts, the TV studios, and today, in the streets of Mumbai.

The search for a legal remedy is seen as an act of betrayal of the nation, perhaps even a terrorist act. Tarun Vijay, one of the most articulate members of the BJP benches in the Rajya Sabha and a former Editor of the RSS official organ Panchjanya certainly thought so. In his outrage at the terrorist raid in Gurdaspur, Vijay Tweeted “India must take revenge of the cowardly attack in Gurdaspur. Attackers and apologists of Yakub Memon fall in the same class”.

But he is a politician, representing a sizeable and perhaps overwhelming vote bank that even the Congress party dare not even remotely be seen as offending. And he is attacking a mere bunch of social activists, retired judges, a few academicians who are the usual offenders, and a handful of lawyers who too can be called serial anti-establishment mavericks. Others target the current judges of the Supreme Court who are seen as offending the national sentiment, perhaps motivated by their religious identity. The target in particular is Justice Kurian Joseph. One Mr Arush Choudhary, who seems to be using his full name instead of one of those patriotic handles used by members of the Khaki call centres, makes it quite clear in his Tweet on the ruling of the judge which split the two-member Bench of the Supreme court and sent the final decision on Memon to a three member bench specially set up by the Chief Justice.

I hope it is no one’s argument that capital punishment prevents crime. Or that it is a deterrent to terrorism. People who are determined to commit suicide as human bombs or the three-member squad that killed so many civilians and policemen and then was liquidated in Gurdaspur, do no longer have any fear of death by hanging on the off chance that they will be captured alive. A young man was indeed captured alive in the attack on Mumbai, and was eventually hanged. The monotonously frequent terrorism in the Kashmir-Jammu-Punjab region speaks for itself. Other civilian crimes such as murder and rape have not shown any decline.

The debate in the past one week has however done a little good. It has once again refreshed public memory on the statistics and judicial obiter dicta that comments on the skewed justice system.

It reminded us of the Supreme Court bench of Justices Sathasivam BS Chauhan had ruled in the case of Dara Singh, a Bajrang Dal activist, who had burnt alive Australian Graham Staines and his teenaged sons Timothy and Philips along with his two minor children. The judgment, upholding Orissa High court’s decision commuting death sentence said "Though Graham Staines and his two minor sons were burnt to death while they were sleeping inside a station wagon at Manoharpur, the intention was to teach a lesson to Staines about his religious activities, namely, converting poor tribals to Christianity".

It also reminded us that death sentences are common in India, with 1,303 capital-punishment verdicts between 2004 and 2013, according to the National Crime Record Bureau (NCRB) prison statistics. Mercifully, only three convicts were executed over this period, one each in West Bengal (2004), Maharashtra (2012) and Delhi (2013). One of them was Dhanjay, the other two Mohammad Ajmal Amir Kasab and Mohammed Afzal Guru.

There will be death vigils tonight. And a renewed campaign against Capital Punishment from tomorrow, once again. This is not the end. 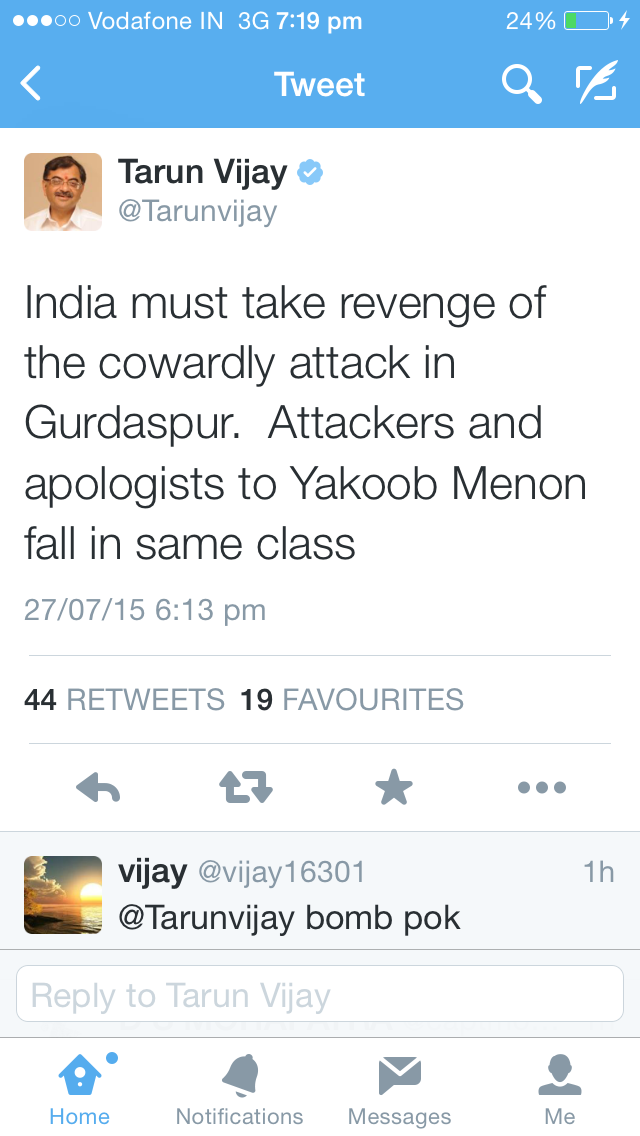