The Bihar elections through hoardings

PATNA: Bihar’s capital city of Patna has come to look like a PR battlefield, with the city’s skyline dominated by political hoardings ahead of the upcoming assembly elections. The parties in the political fray are taking the poster wars seriously, with reports suggesting that the BJP has spent Rs. 2.75 crore on 5314 hoardings across the state. Although the same figures indicate that the JD(U) has put up 1267 election posters, Chief Minister Nitish Kumar’s face is the dominant one in the city of Patna.

The hoardings further highlight issues that the political leaders are stressing on in their speeches, and as such, represent the political narrative of the 2015 Bihar elections. Development is key across the board with slogans such as -- “Agay bharta rahay Bihar, phir ek bar Nitish Kumar” (if Bihar is to keep progressing, vote for Nitish Kumar) and “Bihar ke vikas ke liye, badaliye sarkar, badaliye Bihar” (for the development of Bihar, change the government, change Bihar) -- plastered across the capital city.

Here’s a look at the hoardings, and what they reveal about the upcoming polls. 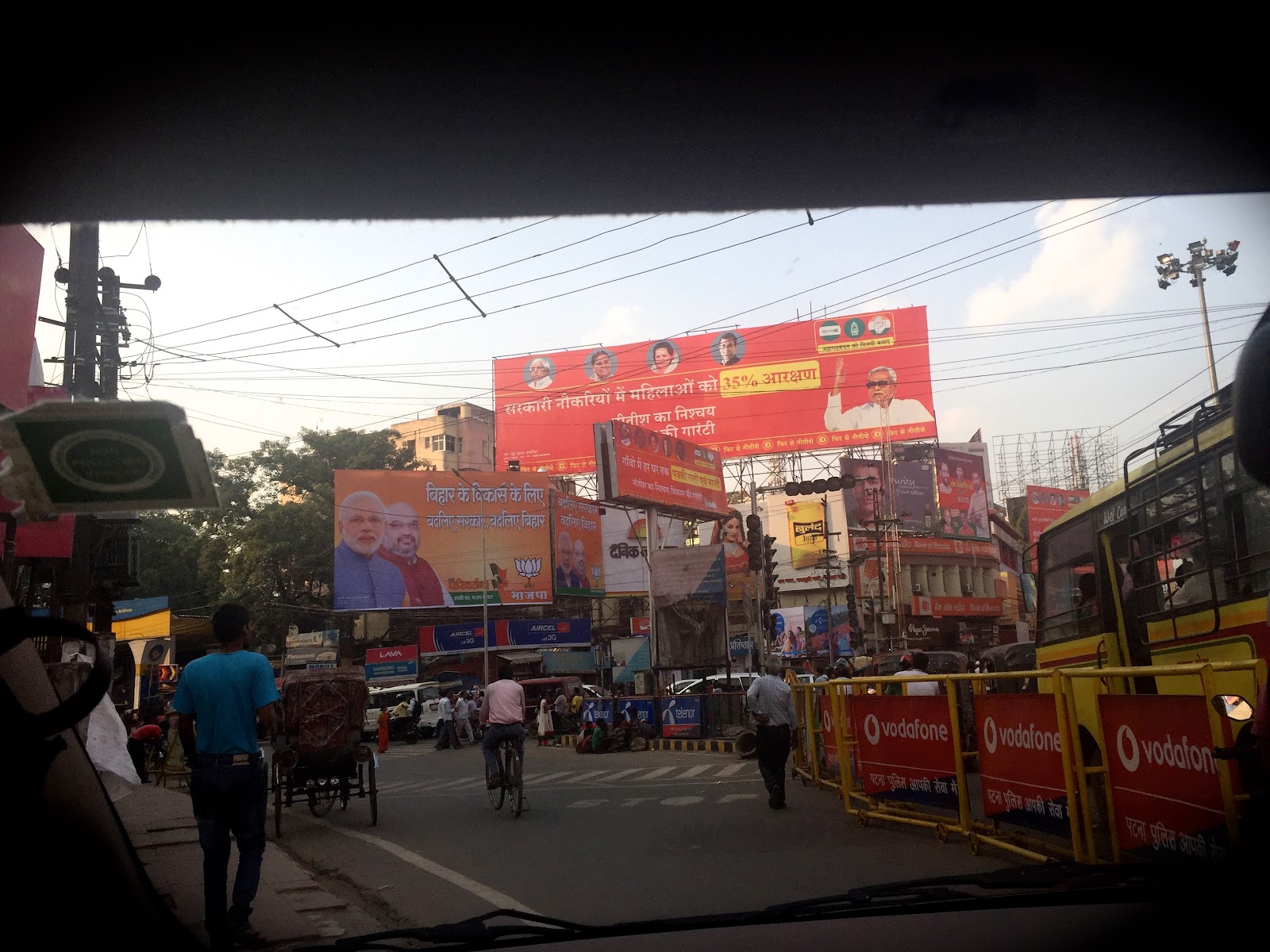 A key theme this election is that of “Bihar” versus “Bahaar” with the mahagathbandhan playing to the strength of Nitish Kumar as Chief Minister and nominating the incumbent as their candidate. The CM’s face is the most visible in Patna, and the JD(U) leader has hit out at Prime Minister Modi for neglecting Bihar for several months.

The BJP is represented on the posters in Bihar by PM Modi and Amit Shah, both from outside of the state. The party is yet to announce a CM candidate, although it has said that the post will be filled by a local leader. 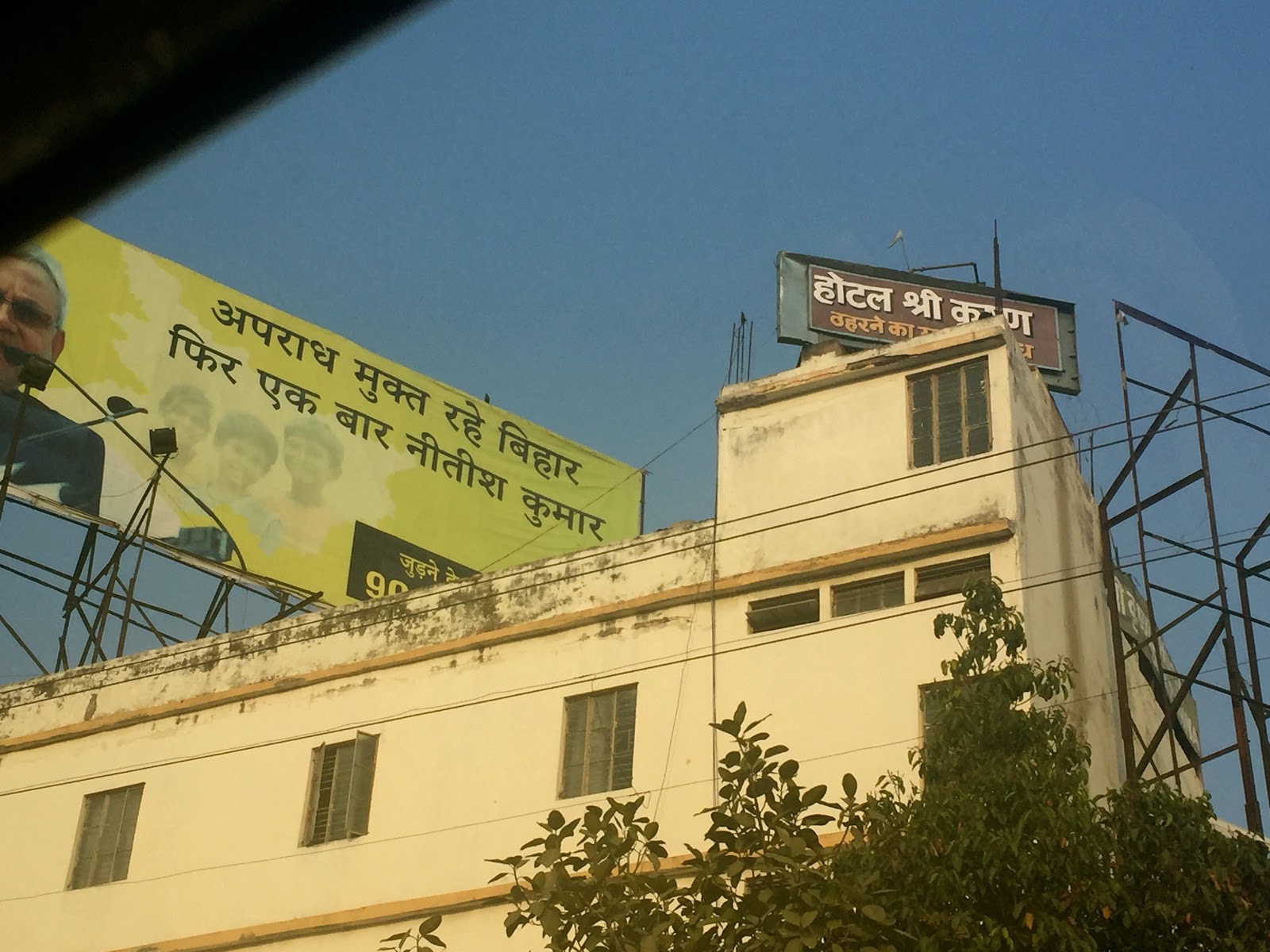 The main hoardings in Patna are of JDU and BJP, fitting in with the “PM versus CM” face-off tag that is dominating the media narrative on these elections.

Interestingly, although Patna is seen as a BJP stronghold, the Chief Minister is winning the hoardings race here, with more JDU posters than any other party in the capital city.

Also interestingly, PM Modi -- who is the face of the BJP’s campaign -- appears alongside Amit Shah in Patna, representing a departure from party strategy that has consistently given the Prime Minister the featured position in its poster campaigns. 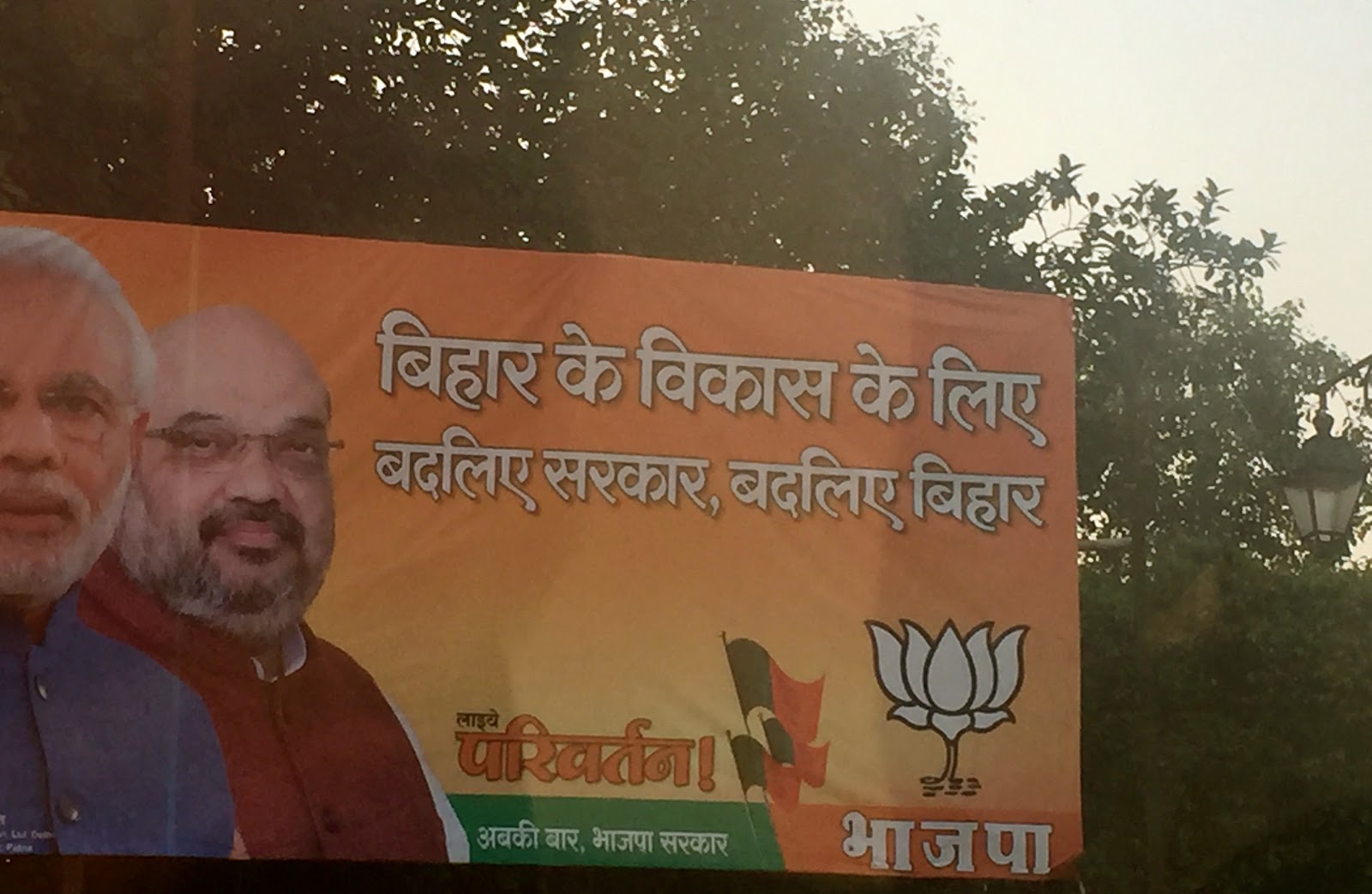 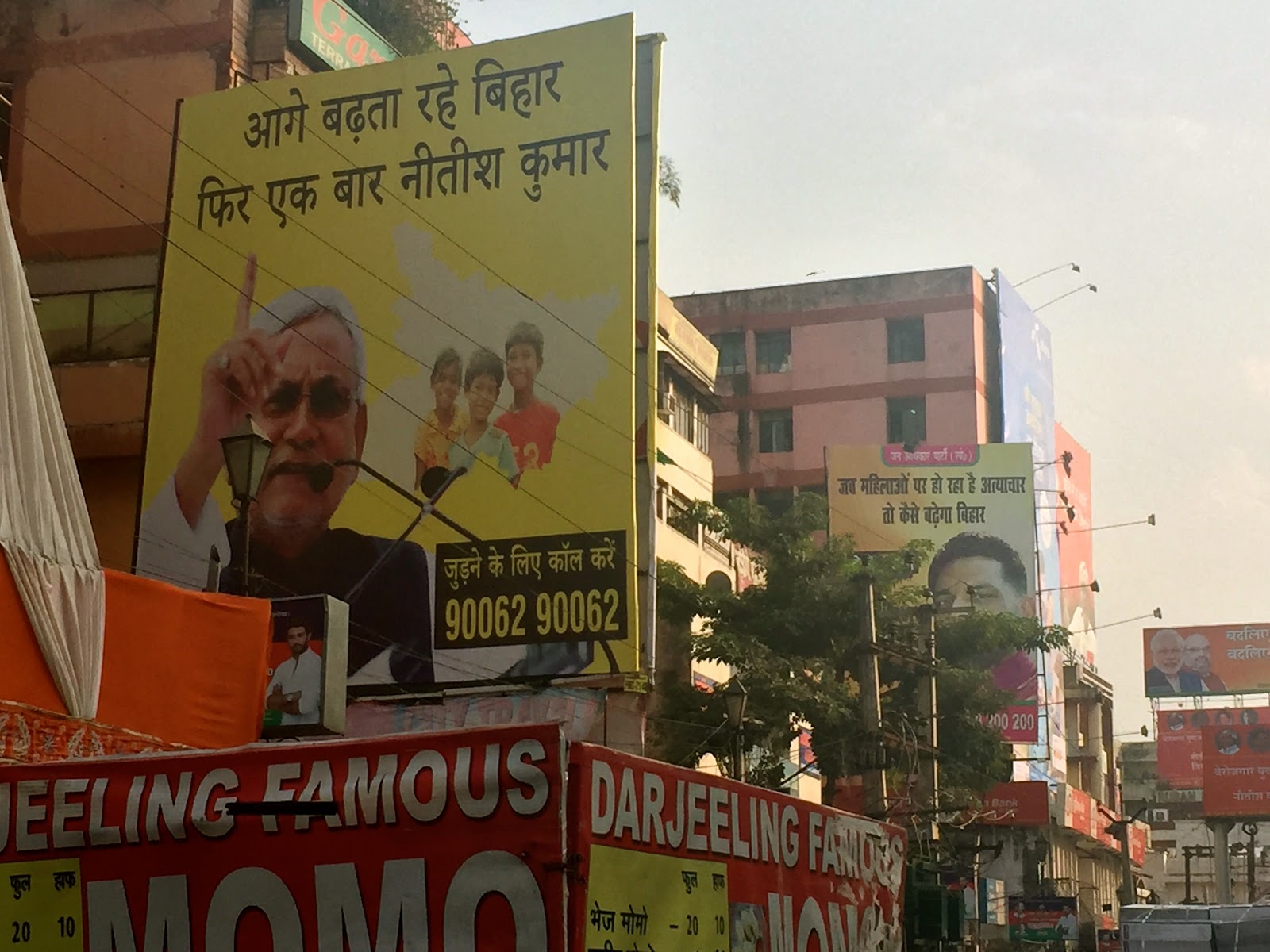 The fact that vikas, or development, is the theme central to this election is evinced by the slogans on the posters.

This is a major plank being used by Nitish Kumar, and has earned him goodwill across the state. At a press conference on Saturday he was particularly incensed over what he claimed were Prime Minister Modi’s lies negating the development in Bihar. 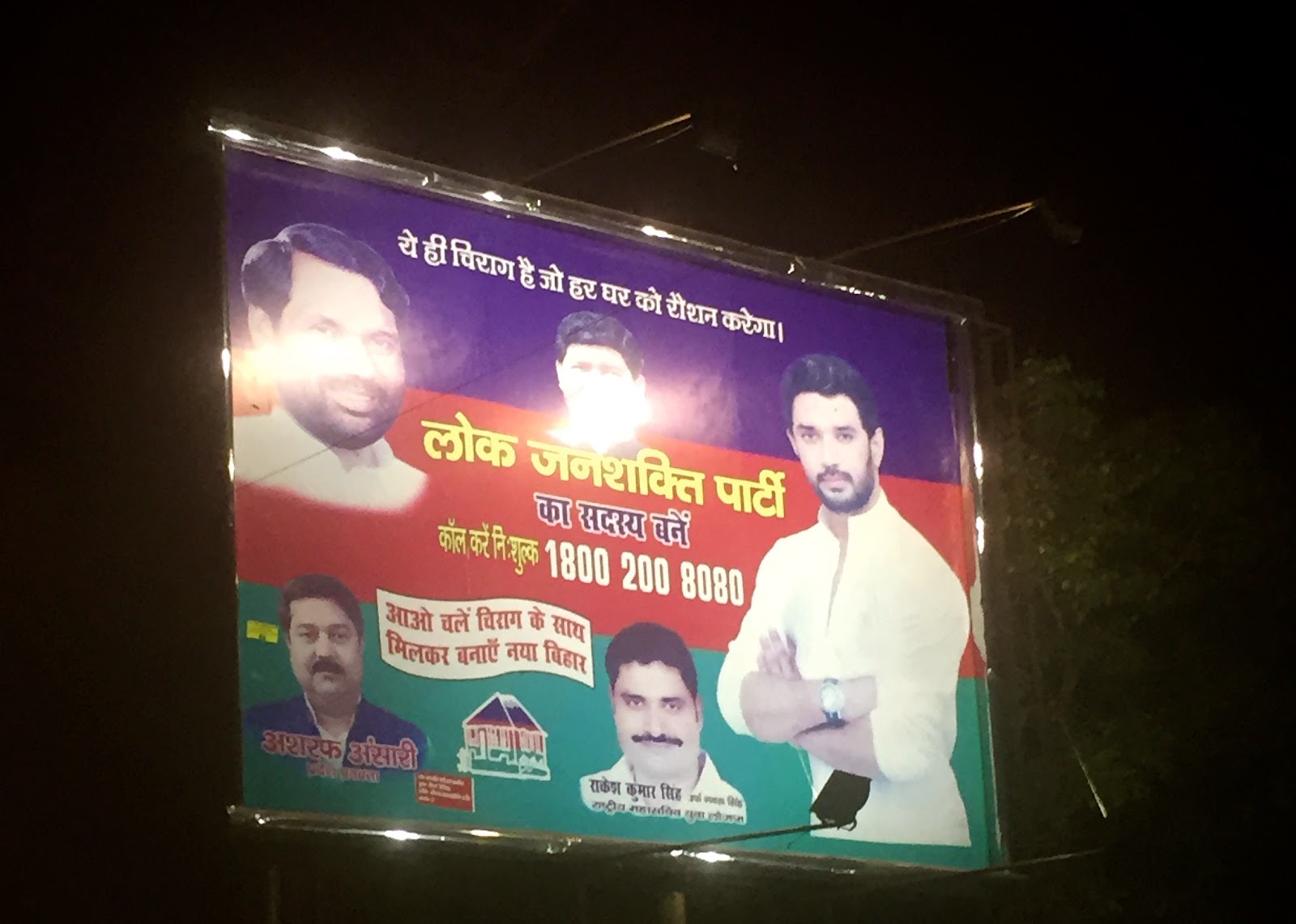 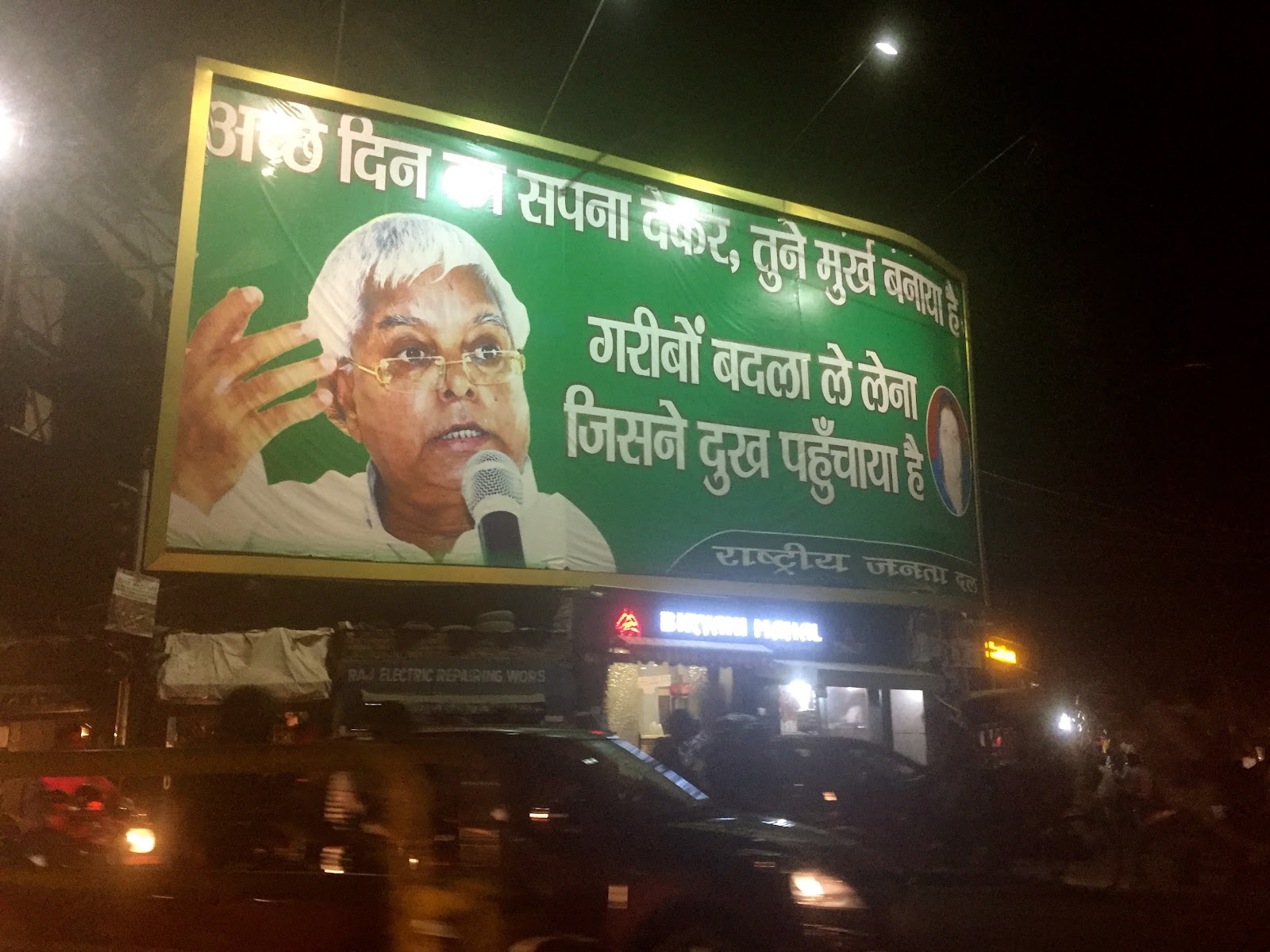 Although the 2015 elections are being projected as a “PM versus CM” faceoff, a glimpse at Patna’s skyline is a reminder that there are other players this election. The BJP is allied with LJP, RLSP and HAM and the JDU is part of the mahagathbandhan (grand alliance) which includes the RJD and Congress.

In fact, JDUs alliance with RJD became a point of attack from the BJP, with one of the hoardings reading: “"Apraadh, Brashtachaar aur ahankar / Kya is gatbandhan se badhein ga Bihar?" (Crime, corruption and arrogance, is that the alliance for Bihar's progress?") where crime and corruption refers to the RJD and Congress. The tamer “arrogance” is a reference to Nitish Kumar.

Interestingly, while the JDU posters feature the grand alliance leaders, the BJP hoardings make no mention of the NDA allies. The disregard for the allies that many of the leaders have spoken of during seat sharing, is thus echoed in their absence from the hoardings.

5. Where is the Congress? 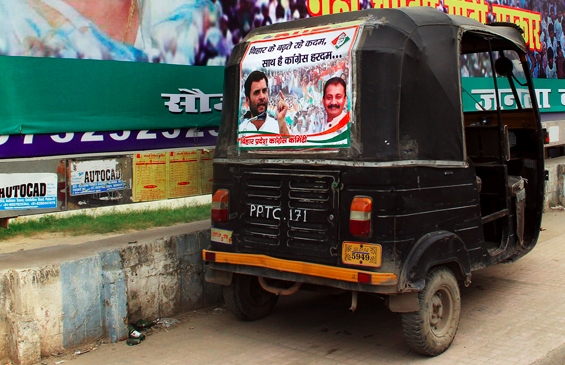 Missing in the hoardings is the Congress, with its presence being limited to tiny pictures of Sonia Gandhi and Rahul Gandhi on a small corner of the JDU hoardings. The Congress has no independent hoardings, and of the three partners in the grand alliance, it the least visible.

In political-verse parallels, the Congress is equally invisible in conversations in Patna and outside. 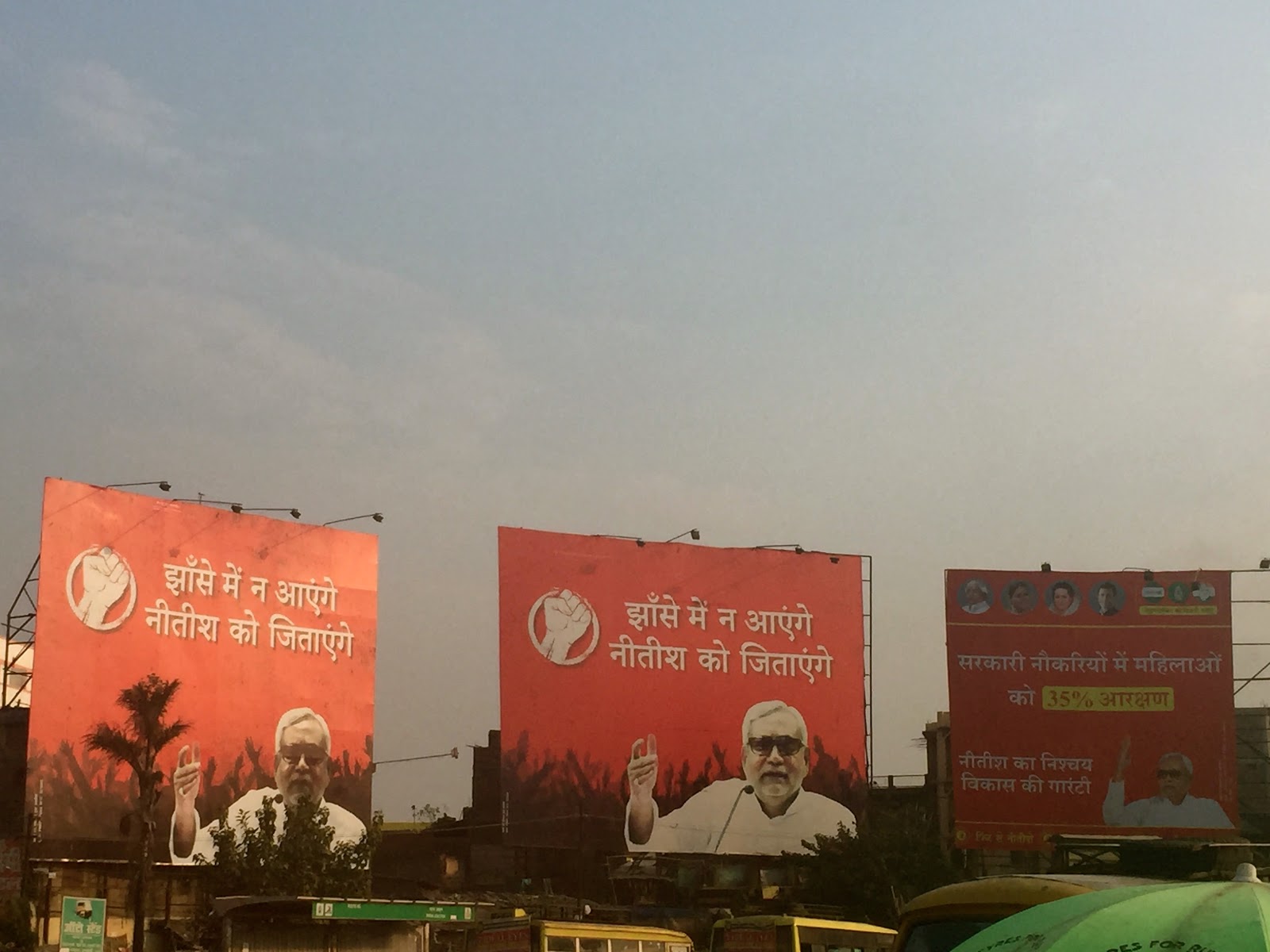 In Patna, at every nook and corner, on every building, over every wall -- is an election hoarding; there’s no escaping it. Just as there is no escaping political talk in Bihar right now, as conversations are dominated by intense debate on who will win the upcoming polls?

It is interesting how several hoardings are put up in one spot for both JD(U) and BJP in Patna, saying very much the same thing but dominating the skyline for impact. 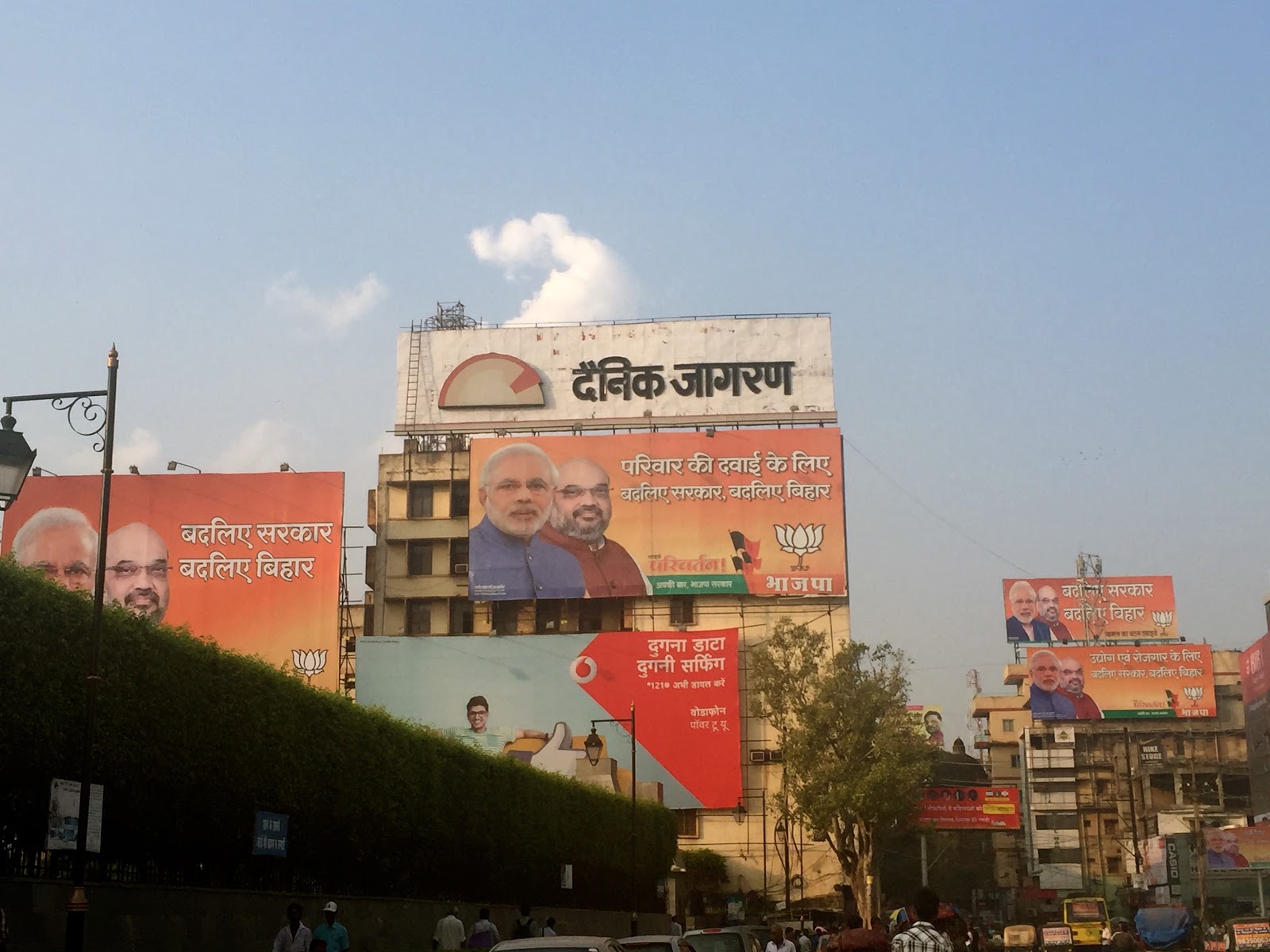 (Photographs by The Citizen).