Punjab On The Boil: Is It A 'Foreign Hand' Or Is IT Bad Politics And The Rockstar Guru?

NEW DELHI: Punjab is on the boil with the trouble brewing since over years actually hitting the streets in violence. Incompetence of the state government, and deliberate stoking of fires by political parties has led to protests, desecration of religious texts,firing and now flag marches by paramilitary troops that have been rushed to the border state. Censorship by blocking the internet in specific areas is also part of the government action that has however, failed to restore normalcy to the border state.

Punjab is abuzz with rumours and speculation about the mastermind behind the systematic effort to create violence by desecrating the religious scriptures. However, in the absence of clear information and just a few arrests the theories range from the government’s insistence of the involvement of a ‘foreign hand’ that basically points to handlers in Australia and Dubai, and hints at Pakistan intelligence; to the more local attributions against the Shiv Sena, the Congress and the BJP and the controversial Dera Sacha Sauda who is at the centre of protests that have led to the currrent violence.

In fact the last with its controversial chief Gurmeet Ram Rahim Singh remains in the spotlights, as the violence began in Punjab after the decision of the Akal Takht to accept his apology, and absolve him of any guilt, for a 2007 incident where he had sought to project himself as Guru Gobind Singh by wearing clothes similar to the Sikh saint in 2007. This had sparked off violence across Punjab leading to death and injuries. 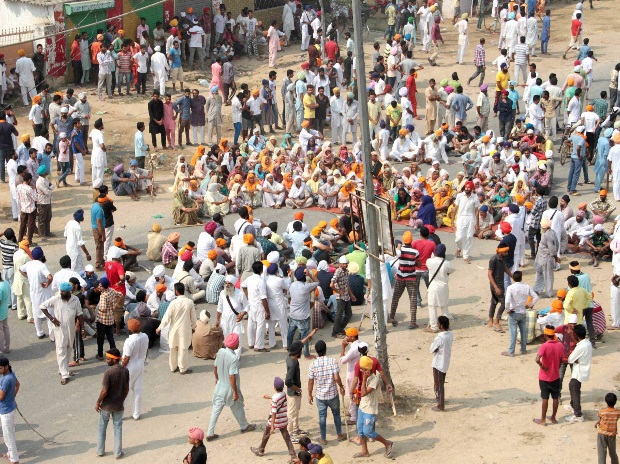 Protests in Punjab over desecration of holy book

This Sirsa based godman Gurmeet Ram Rahim Singh who is the chief of Dera Sacha Sauda has been in the news since, and for all the wrong reasons. He has ignited protest, and is controversial and unpopular in the state for his criminal activity. More recently he came to be described as the Rock Star Guru when he starred in his own movie called Messenger of God.

Gurmeet Singh is said to have dubious links, and has been allegedly involved in criminal activities. He is said to be close to militant Gurjant Singh Rajasthani of the Khalistan Liberation Force. He is a rich man who moves around in style with women attendants and state security. He has been accused of rape and the case has since been lying with the CBI since Atal Bihari Vajpayee was the Prime Minister almost 15 years ago. He has been accused of intimidating the relatives of the rape victim. And in 2012 of allegedly castrating 400 persons, an accusation made by one of his followers. The case is in the courts.

Singh endeared himself to the BJP, and more specifically Prime Minister Narendra Modi by showering praise on the latter during the Haryana Assembly elections last year in October. The BJP was contesting its Punjab ally, the Akali Dal and the Haryana based INLD. Gurmeet Singh supported PM Modi--being at loggerheads with the Akali Dal-- at the time maintaining, "There is a lot to say about Narendra Modi. What he has done is remarkable. We launched 27 safai abhiyaans and approached the local administration and then state governments during last few years. We told them if we could try cleaning up Delhi in 16 hours and Jaipur in five hours, they can do it as well. There was little response. I am very happy that the prime minister has heard us." 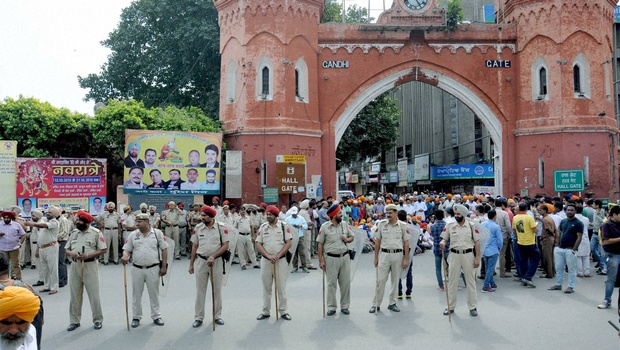 Police on guard at a protest by angry Sikh organisations

He told the media, "Modi is taking up a lot of causes. He has heard our requests. I am just a fakir. He has my blessings.”

Significantly these remarks came less than two months after a Bathinda court acquitted him of hurting religious sentiments by allegedly dressing up as guru Gobind Singh in 2007. This had led to violence in Punjab.

And now most recently, less than a month ago the highest temporal body of Sikhs, the Akal Takht took the state by surprise when it accepted the apology from Gurmeet Ram Rahim as he likes to describe himself, and pardoned him of wearing the clothes associated with Guru Gobind Singh. This led to violence in both Punjab and Haryana with several Sikh organisations now part of the protest, maintaining that they would launch an agitation to restore the Sarbat Khalsa institute and remove the high priest of the Akal Takht for this decision.

The perception all across Punjab, not confirmed, is that the BJP government at the centre influenced the Akal Takht jathedar to step in favour of the Rock Star Guru.The Sikh organisations include, amongst others, Shiromani Akali Dal, Dal Khalsa, Panthak Committee, Panch Pardhani The protesters also include the families of residents who had died during the 2007 protests against Singh for dressing up as Guru Gobind Singh. Dal Khalsa in fact described the Akal Takht’s decision as “shocking” and and said that this pardon was against all Akal Takht norms.

"The entire Sikh community is shell-shocked. It's ironic that the norms, traditions and sovereignty of Akal Takht have been undermined, compromised and destroyed by those who are mandated to safeguard it," Kanwar Pal Singh, spokesperson of the Dal Khalsa was quoted as saying in the media.

The desecration of the scriptures has started on the heels of these protests with the Punjab government lurching around in the dark. It now claims a ‘foreign hand’ but then as a senior journalist who has been covering the violence said from Chandigarh, “the foreign hand only exploits the mess the domestic hand makes.” And the mess has been created by the usual mix of unscrupulous, opportunist politics with inefficient and corrupt governance.