Earthquake Different From The Most Recent

Scenes from a hospital, Jalalabad, Afghanistan

NEW DELHI: At least 280 people have died and over 2000 are injured, mostly in Pakistan, as a massive 7.5 magnitude earthquake hit remote areas of Afghanistan and Pakistan on Monday. Tremors were felt in neighbouring India and Tajikistan.

The earthquake was centred in the mountainous Hindu Kush region, 76km (45 miles) south of Faizabad, the US Geological Survey reported.

Rescue teams have been sent to the remote mountainous areas, which are ill equipped to cope with a disaster of this scale. The death toll is expected to rise, as the effects of the quake on remote villages is unclear, especially as communications have been cut off. 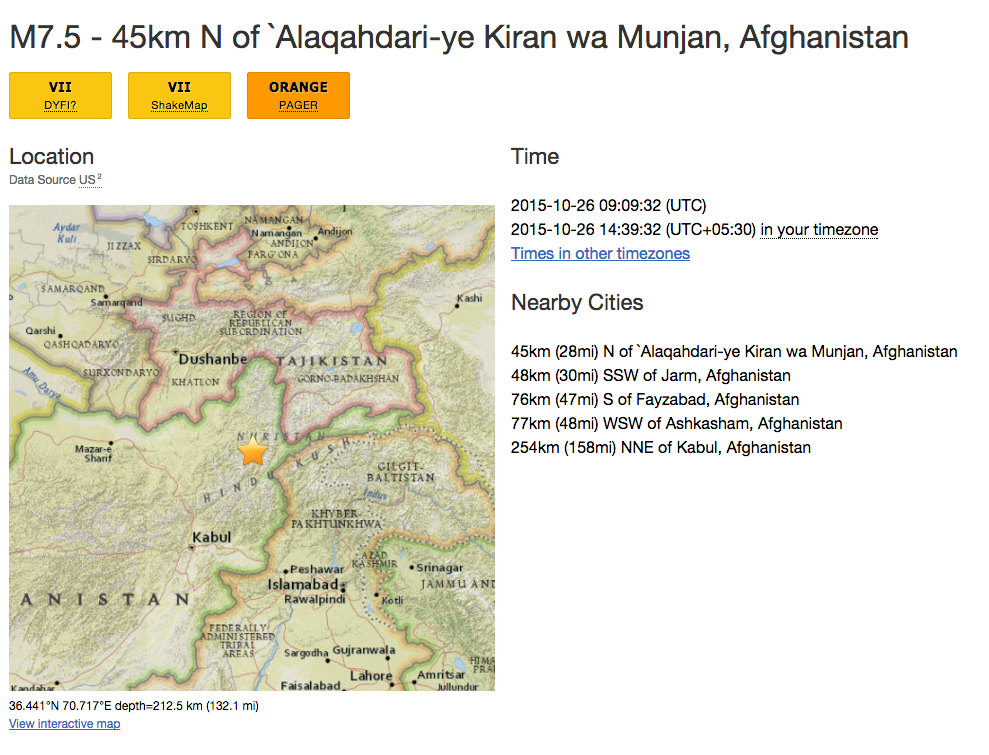 According to the US Geological Survey: “The October 26, 2015 M 7.5 earthquake near the Hindu Kush region of Afghanistan (SW of Jarm) occurred as the result of reverse faulting at intermediate depths, approximately 210 km below the Hindu Kush Range in northeastern Afghanistan. Focal mechanisms indicate rupture occurred on either a near-vertical reverse fault or a shallowly dipping thrust fault. At the latitude of the earthquake, the India subcontinent moves northward and collides with Eurasia at a velocity of about 37 mm/yr. Active faults and their resultant earthquakes in northern Pakistan and adjacent parts of India and Afghanistan are the direct result of the convergence between the India and Eurasia plates. This collision is causes uplift that produces the highest mountain peaks in the world including the Himalayan, the Karakoram, the Pamir and the Hindu Kush ranges.

Earthquakes such as this event, with focal depths between 70 and 300 km, are commonly termed "intermediate-depth" earthquakes. Intermediate-depth earthquakes represent deformation within subducted lithosphere rather than at the shallow plate interfaces between subducting and overriding tectonic plates. They typically cause less damage on the ground surface above their foci than is the case with similar magnitude shallow-focus earthquakes, but large intermediate-depth earthquakes may be felt at great distance from their epicenters. "Deep-focus" earthquakes, those with focal depths greater than 300 km, also occur beneath northeastern part of Afghanistan. Earthquakes have been reliably located to depths of just over 300 km in this region.

Seven other M 7 or greater earthquakes have occurred within 250 km of this event over the preceding century, the most recent being a M 7.4 earthquake in March 2002 just 20 km to the west of the October 26, 2015 event, and with a similar depth and thrust fault orientation. The 2002 event caused over 150 fatalities and the damage or destruction of over 400 houses in relation to an associated landslide.”

The above states that the earthquake is the result of the Indian subcontinent pushing upwards, and such earthquakes have occurred several times in the recent past, most recently in 2002.

In yesterday’s earthquake, at least 12 of the victims were Afghan schoolgirls who were killed in a crush as they tried to get out of their building.

"They fell under the feet of other students," a disaster official in the province of Takhar told Reuters. 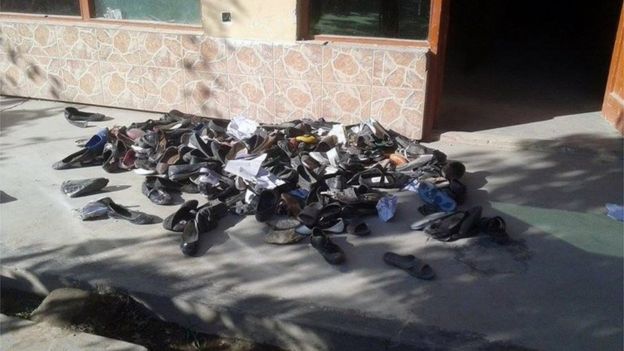 (The shoes of Afghan girls involved in a deadly stampede at their school in Takhar Province. Credit AFP/BBC).

Afghanistan's Chief Executive, Abdullah Abdullah, said that the earthquake was the strongest felt in the country in recent decades.

The north eastern Badakhshan province, that is remote because of its mountainous location, has pockets controlled by the Taliban that are leading an insurgency against the Afghan government. Fatalities have also been reported from Nangarhar and Kunar, with a total of at least 52 reported dead in Afghanistan.

Afghanistan's Chief Executive Abdullah Abdullah tweeted that the government had asked aid agencies to assist with rescue and relief operations. 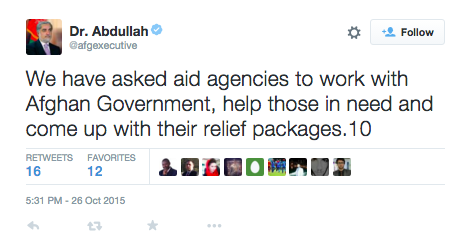 The bulk of the fatalities caused by the earthquake were reported from Pakistan, with at least 214 known casualties and the numbers expected to rise.

In Pakistan’s Khyber Pakhtunkhwa province alone, officials said at least 179 people were known to have died, and more than 1800 were injured.

Analysts point out that although this was a powerful quake, 7.5 in magnitude, the fact that its focus was deep resulted in far less destruction than an equally powerful earthquake that originated close to the earth’s surface. Yesterday’s earthquake originated more than 200km (125 miles) below the earth's surface, far below the surface compared to the 7.8 quake which brought widespread destruction to eastern Nepal in April -- which was only 8km deep. Similarly, the 2005 Kashmir earthquake was magnitude 7.6 and just 26km deep.