NEW DELHI: Lunch with the Queen, an “Olympic Style” extravaganza before 70,000 cheering supporters at the Wembley Stadium are just some of the highlights of the power packed visit by Prime Minister Narendra Modi to the UK. Studded, as all his visits, are with “firsts’ such as the Wembley meeting, it has the Ministry of External Affairs working overtime as the ‘events manager’ to ensure it all happens without a glitch.

Setting the stage for this is the South Asia Solidarity Group that has started a “Name and Shame” campaign targeting the British MP’s who as it says “not only support Modi but are eager supporters of Hindutva.”

A statement by SASG states, “'If fascism has been reincarnated in India with Prime Minister Narendra Modi as its standard bearer, on this side of the world British MPs are playing the role of Chamberlain..” The first to be included in SASG's Hall of Shame was Barry Gardiner MP for Brent North. The second now is Keith Vaz MP for Leicester East .

The SASG uses strong language (that The Citizen as per editorial policy has edited) as it alleges in its article on Vaz,

'Vaz is an opportunist par excellence. He also has a remarkable talent for reinventing himself . While in 1989 he joined right-wing Muslim marchers opposing the publication of Salman Rushdie’s book The Satanic Verses, today he is able to welcome Narendra Modi, with open arms ….

Against a background where nearly a million people in the UK depend on food banks, while in India thousands of traumatised people (who have lost loved ones as a result of on-going Hindutva violence) are still without homes or livelihoods, Vaz lavished praise on the ‘Olympics style’ cultural extravaganza to welcome Modi. He declared ‘I am so excited about this event I will donate my pay rise for November for this great function’.

Vaz ‘has spent much of his 26 years in the corridors of power mired in near-scandals, actual scandals, watchdog scrutinies, leaks, accusations, investigations, complaints and a suspension’ … and ‘been christened “the Teflon MP” and “Keith Vazeline” for the way he seems to slide past trouble’. These scandals stretch from the Hinduja affair in 2001 to the Lalit Modi affair in summer this year.

Smaller protests have been planned at almost all venues that PM Modi is scheduled to be at, including Cambridge University where Professors and others have already issued a statement on the growing intolerance in India, urging the Varsity not to welcome the Indian Prime Minister on its premises.

Interestingly a “Reclaim Diwali” event is also planned by the protesters in London to “Light the diyas of solidarity! Burn the demons of Hindutva Fascism * Religious Hatred * Patriarchy * Dalit groups are also coming out to protest the visit although on November 14, the last day of his visit, PM Modi will be inaugurating the Dr Ambedkar Memorial in London. 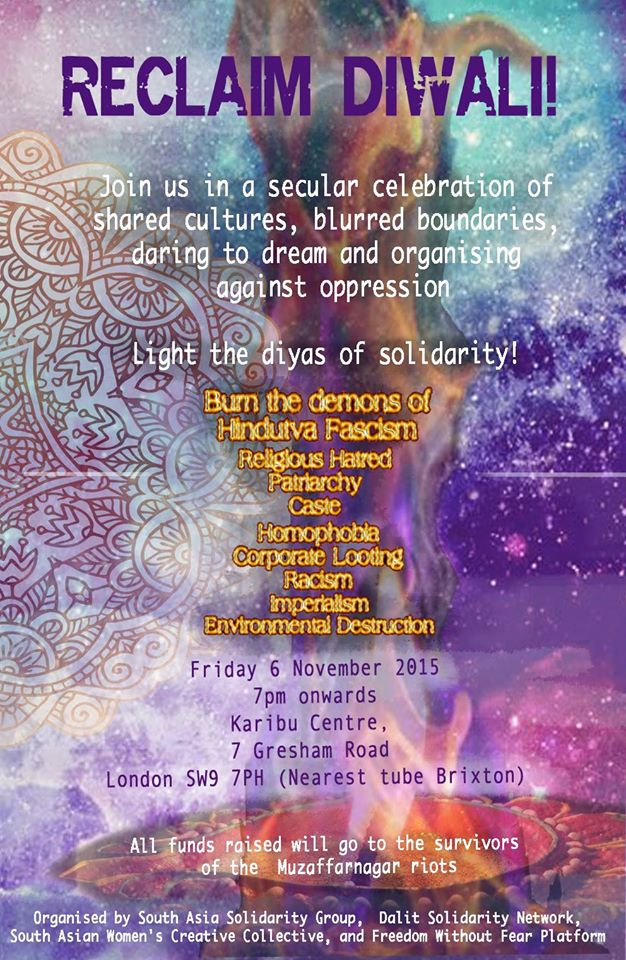 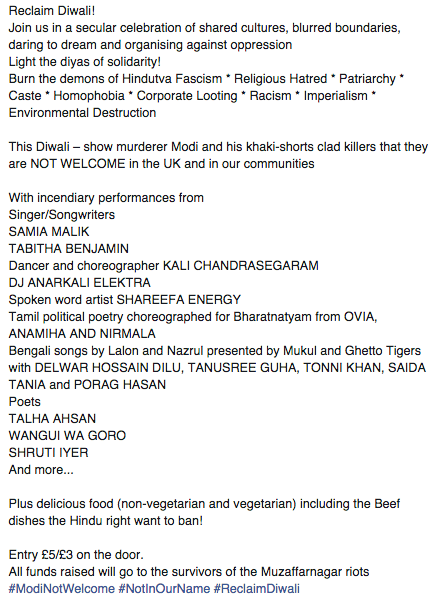 There is already an undeclared standoff between New Delhi and the Labour party whose new leader James Corbyn is well known amongst rights groups in India, and has always taken a strong position on issues of freedom, and against intolerance. PM Modi was earlier denied a visa for the UK after the Gujarat violence in 2002, with the Cameron government lifting the ban after the last Lok Sabha elections.