NEW DELHI: Congress proposes, Bharatiya Janata party disposes. And this seems to be a close economic relationship where one government’s corporate friend, becomes the other government’s friend as well. And so it was with a huge iron ore contract with Afghanistan where the Manmohan Singh government first bent the rules to bring in a public sector led private consortium to strike a deal that is so big, and so lucrative, that it is now perceived as one of the factors behind the sudden stop-over of Prime Minister Narendra Modi in Lahore where he spent two hours with Pakistan PM Nawaz Sharif.

The Congress party peeved with the Lahore visit, hinted at the ‘private interest’ behind the meeting at a press conference recently. Official sources later told The Citizen that one of the factors for the stop-over that came as a shock to the BJP as well, was reportedly business. And central to this ‘business’ is brother of Congress MP Naveen Jindal recently probed again for the coal scam, Sajjan Jindal who is the new suave kid on the ‘big bucks’ block. 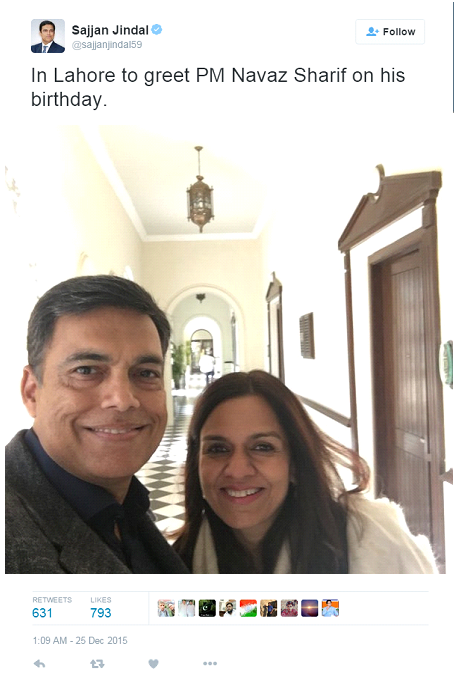 Much of what The Citizen reports from here on is based on information in the public domain. But when pieced together tells a story that stretches across three countries, and confirms the kind of power and influence that corporates can bring to politics where war talk is replaced by peace, and wherein supposed ‘enemy’ nations twist the rules in close cooperation for mutual benefit.

Turn the clock to 2011. Odd reports in the media at the time reported that then Afghanistan President Hamid Karzai selected an Indian consortium of private companies led by public sector Steel Authority of India as the preferred bidder for three of the four iron ore blocks in Hajigak that, according to conservative estimates, hold over 1.8 billion tonnes of iron that fetches at least Rs 4000 per tonne. The profits thus reach whopping figures with the governments of Afghanistan, Pakistan and India working together ---behind the animosity and the hostility---to ensure its success.

In anticipation of this project, the Manmohan Singh government in what was at the time projected as public-private partnership, cobbled together this consortium led by SAIL but with private companies in control. It might be recalled that SAIL, a maharatna PSU, had officials from the Ministry of Steel as its Board of Directors along with Ishar Judge Ahluwalia, wife of then Planning Commission Chairman Montek Singh Ahluwalia and blue-eyed colleague of Dr Manmohan Singh. AFISCO--Afghan Iron and Steel Consortium of seven companies---was selected as expected by Karzai with almost 45 percent of the stake with companies owned by the O.P.Jindal family,with Naveen Jindal, Congress Member of Parliament and a favourite with the Congress leadership, in top form at the time.

A media report in 2012 said that it was not clear how SAL chose the four private companies, headed by Naveen Jindal and his relatives. It was never clarified whether this was cleared by the Cabinet Committee of Economic Affairs, and who was behind the decision to include companies with just one family ownership. More so as it was a major project, involving deep investment before the profit. Reports also suggested that there were at least eight other steel companies that were interested in the project, but only the Jindal family was singled out. The Manmohan Singh government went out of power without this key question ever being answered.

It was around this time also that the name of who has since become a prime player Sajjan Jindal, Naveen Jindals brother, was fleetingly mentioned in the news reports. He owns the JSW Group of which JSW Steel is a part which after the merger of ISPAT steel, has become India's second largest private sector steel company with an installed capacity of 14.3 MTPA.

This was the first time Indian public and private sector companies had come together to make a joint bid for iron ore assert abroad. The proposal was huge as it also involved the setting up of a steel plant in Afghanistan and a power plant to cater to its needs. Despite this there was no accountability with the odd report appearing in the media clearly not seen as sufficient pressure by the Congress led government that had bent the rules to suit the frame.

The proposal went underground insofar as the media was concerned, with the new government led by Prime Minister Narendra Modi coming to power last year. One of its major planks was to eradicate corruption. It was during the PM’s oath taking ceremony that Sajjan Jindal made an appearance, with a couple of media reports after the event shedding interesting light on the new corporate-political equations that seemed to have taken root. Pakistan Prime Minister Nawaz Sharif had come to Delhi for the ceremony on the invitation of PM Modi, along with the other Saarc leaders. In deference to good relations, Sharif had dispensed with the practice of meeting Hurriyat leaders from Jammu and Kashmir. He instead attended a tea party hosted by Sajjan Jindal in his honour.

This tea party made more waves in Pakistan than India. Former cricketer and chairman of the Pakistan Tehreek-e-Insaf Imran Khan attacked Sharif for finding time to have tea with Jindal and not for the Hurriyat leaders. Speculation that the tea party was “part of a strategy by Indian steelmakers” to pitch for Pakistan’s logistical support for the iron ore project in Afghanistan was carried in reports in the Pakistan media. Clearly the tea party was a sequel to a relationship already established between Sajjan Jindal and Sharif with talks having progressed to far beyond support, according to sources.

The aim of the intense lobbying by Jindal and associates has been to convince Pakistan to give the iron ore transit rights, to ensure its shipment from Afghanistan via Pakistan to india. And perhaps, in the process to cater to PM Sharifs own interests as he owns a Steel factory that also requires iron ore. Jindal is now said to have developed ‘business relations’ that however, could not be confirmed, with Sharif’s Ittefaq Group of Industries founded by industrialist Muhammad Sharif, father of Nawaz Sharif.The Steel connection is being talked of in both Islamabad and New Delhi. Ittefaq industries have been dogged with allegations of corruption with Opposition politicians in Pakistan tracing the groups’s growth directly to PM Sharif’s own positions in power. Speculation here suggests that Sharif will be looking for direct benefit in return for transit rights, if he is able to manage the last at all given the flak and now the terror attack in Pathankot.

JSWs joint managing director Seshagiri Rao has confirmed to reporters that the Indian steelmakers are keen to obtain permission to transport the ore across Afghanistan to Indian ports. Transit rights has been a major issue between India and Pakistan for long, with several rounds of discussions to persuade Pakistan to open the route not making sufficient headway. This time the negotiation has been of an unprecedented private-public nature with Jindal seeking rights just for the iron ore---to move it from Hajigak in the Bamian province of Afghanistan to Karachi from where it is then shipped to Indian ports--- and not for the larger relaxation under bilateral government consideration, for trade and industrial purposes.

The alternative route in case this permission is not forthcoming, would be to transport the iron ore to Russia and then back to India entailing huge costs that would then cut substantially into the profits. Hence the hectic lobbying with the clock now turning to May 2015 when reports that the project had been scrapped, created a quiet undetected furore and fresh lobbying by the stakeholders. It is not clear who was behind these ‘plants’ suggesting that the Modi government, now firmly in power, had developed cold feet and had ‘decided’ to scrap the project altogether.

India's Ambassador to Afghanistan Amar Sinha denied this in a tweet earlier, "Not correct. Meeting only did a SWOT analysis of opportunities and strengths. No decision of this sort."

And now on to December 25 when officials and political leaders seeking to make sense out of PM Modi’s unscheduled stopover in Lahore to meet with PM Sharif, focused on the presence of Sajjan Jindal in Lahore at the same time. Jindal tweeted that he was in Lahore to wish Sharif a happy birthday, the ostensible reason given out to justify PM Modi’s visit as well. Sources believe that Jindal had persuaded PM Modi to stop over in Lahore, and one of the issues discussed by the two PM’s was transit rights to enable to the shipment of the iron ore to India. So far neither government has said a word on this, with details of the nearly two hour meeting not shared by either Prime Minister with their own respective countries. "We are very clear that the prime minister is there to promote only private business interests and not India's national interest which should be supreme," Congress spokesman Anand Sharma said earlier.

Sources said that there are no coincidences in business and politics, maintaining that Jindal’s presence in Lahore at the same time was ‘significant’. The sources wondered at the “lukewarm” response from PM Modi to the Pathankot terror attack.