"My Birth Is My Fatal Accident..."

HYDERABAD: “I feel a growing gap between my soul and my body. And I have become a monster.” This was part of the suicide note left behind by 26 year old V.Rohith, a PhD scholar in the Hyderabad Central University whose life had been made a living hell in the University.

I would not be around when you read this letter. Don’t get angry on me. I know some of you truly cared for me, loved me and treated me very well. I have no complaints on anyone. It was always with myself I had problems. I feel a growing gap between my soul and my body. And I have become a monster. I always wanted to be a writer. A writer of science, like Carl Sagan. At last, this is the only letter I am getting to write.

I always wanted to be a writer. A writer of science, like Carl Sagan.

I loved Science, Stars, Nature, but then I loved people without knowing that people have long since divorced from nature. Our feelings are second handed. Our love is constructed. Our beliefs colored. Our originality valid through artificial art. It has become truly difficult to love without getting hurt.

The value of a man was reduced to his immediate identity and nearest possibility. To a vote. To a number. To a thing. Never was a man treated as a mind. As a glorious thing made up of star dust. In very field, in studies, in streets, in politics, and in dying and living.

I am writing this kind of letter for the first time. My first time of a final letter. Forgive me if I fail to make sense.

My birth is my fatal accident. I can never recover from my childhood loneliness. The unappreciated child from my past.

May be I was wrong, all the while, in understanding world. In understanding love, pain, life, death. There was no urgency. But I always was rushing. Desperate to start a life. All the while, some people, for them, life itself is curse. My birth is my fatal accident. I can never recover from my childhood loneliness. The unappreciated child from my past.

I am not hurt at this moment. I am not sad. I am just empty. Unconcerned about myself. That’s pathetic. And that’s why I am doing this.

objects in mirror are (never) closer than they appear. (From Rohit's Facebook Wall)

People may dub me as a coward. And selfish, or stupid once I am gone. I am not bothered about what I am called. I don’t believe in after-death stories, ghosts, or spirits. If there is anything at all I believe, I believe that I can travel to the stars. And know about the other worlds.

Let my funeral be silent and smooth. Behave like I just appeared and gone. Do not shed tears for me. Know that I am happy dead than being alive.

“From shadows to the stars.”

Uma anna, sorry for using your room for this thing.

To ASA family, sorry for disappointing all of you. You loved me very much. I wish all the very best for the future.

For one last time,

Students are out in protest, with the social media and the demonstrations hitting out at the ABVP that is allegedly to have pushed the young man beyond all limits of endurance, the reportedly complicity of the University authorities and the high levels of intolerance and discrimination that he along with other students was subjected to. Students of HCU and elsewhere have demanded a case under the SC/ST Atrocity Act against Union Minister and BJP leader Bandaru Dattatreya who is said to have directed the HRD Ministry to take acting against Rohit, and four other scholars.

The five Dalit research scholars had been denied access to hostels, they were forced to sleep in a makeshift tent outside on the campus as a consequence to an ‘attack’ on a ABVP student in HCU> Students had been protesting this under the umbrella of the Joint Action Committee but the humiliation proved too much for Rohit who ended his life in obvious despair.

Students who had been in touch with Rohit and the other scholars earlier said that the harassment started a few weeks ago, when the Ambedkar Students Association organised a protest march against the Akhil Bharatiya Vidyarthi Parishad (ABVP) on the Montage Film Society in Delhi University that was screening a documentary movie Muzaffarnagar Baaqi Hai, on the violence that has killed and displaced the minorities in Uttar Pradesh. ABVP leader Susheel Kumar, the students said, posted a comment on Facebook calling ASA sudents ‘goons.’ He submitted a written apology later but then a day later Kumar claimed that he had been beaten up by ASA students, and was hospitalised. The students pointed out that the University’s Proctorial Board carried out an enquiry but could find evidence to substantiate this claim.The Board stated: “The board could not get any hard evidence of beating of Mr. Susheel kumar either from Mr Krishna Chaitanya or from the reports submitted by Dr. Anupama. Dr. Anupama’s reports also could not link or suggest that the surgery of the Susheel Kumar is the direct result of the beating.”

The Board let go of the matter by issuing a warning to both groups. Then, according to the students BJP BJP MLC Ramachandra Rao met formar vice- chancellor Prof. R.P. Sharma. BJP MP and union labour minister Bandaru Dattatreya wrote to the union Human Resources Development Minister Smriti Irani and allegedly forced the university to expel the dalit scholars who were named as being responsible for the attack on the ABVP student.

The ASA students protested against this decision and the new enquiry report. They reportedly met Sharma and he is said to have revoked the suspension, leaving to a new committee to institute a fresh enquiry into the incident. However, this did not happen and the students were not allowed to go into the hostel, common places, administrative buildings. All the five students belong to economically weak families and had been sitting outside the hostel for the last ten days, asking for the suspension to be revoked.

Hundreds of students sat on vigil Rohits body, waiting for the state to register a FIR against the BJP leaders. However, they were attacked by the police, and the body was snatched away with students being beaten “savagely.” Eight Dalit students were reportedly arrested.

The death has unleashed a storm of protest faced with the HCU authorities, HRD Ministry, the ABVP and the BJP maintaining complete silence. Demonstrations are being held by students in Delhi and other cities with an earlier letter by Rohith to the HCU Vice Chancellor asking him to provide ropes in the rooms of all Dalit students to hang themselves being widely circulated. 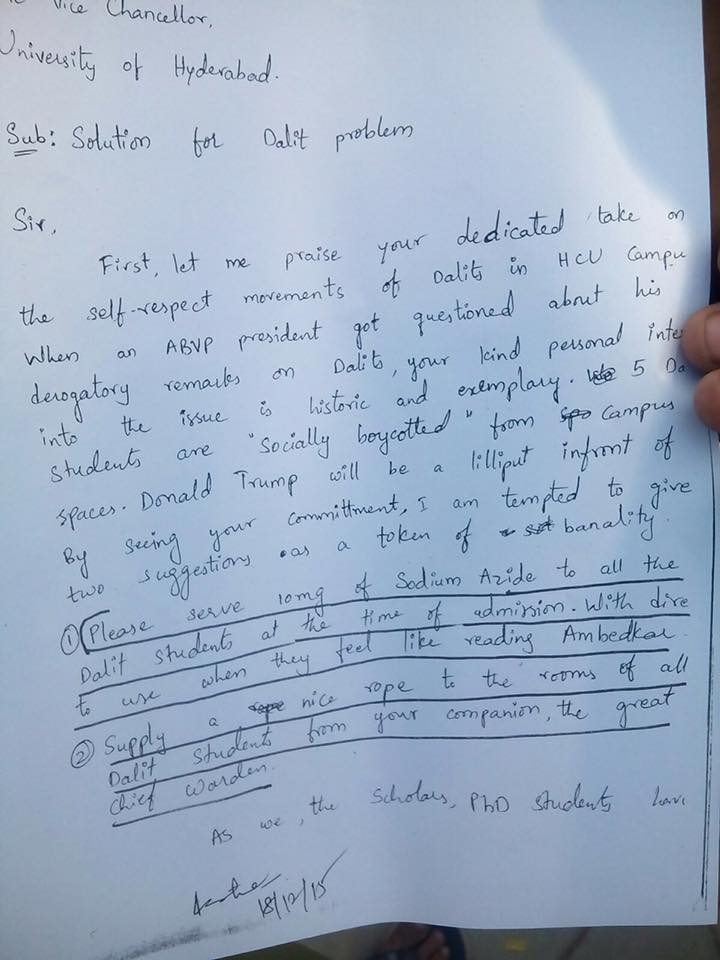 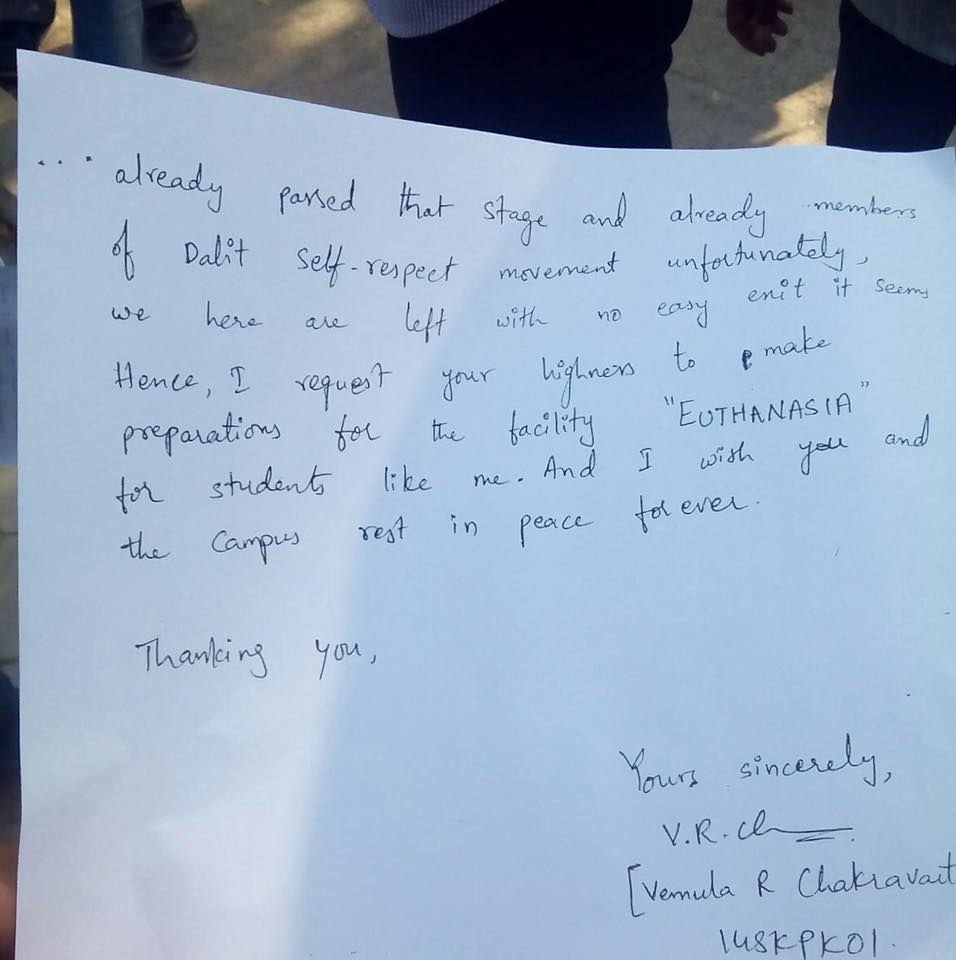 Banojyotsna Lahiri in a poem expressed the sentiment running through the students across India:

We were never five.
we are millions and more..
and tomorrow when we will uproot
the brahminical banyan tree,
whose poisonous branches
tightens the noose around all our throats,
when we shall take to the streets
and storm your citadels of power,
Rohit will lead us from the front.
We spent nights out in the cold
but we were never alone
the stars in the night sky stood by us,
and so did countless other comrades
all across the world.
we were cold, but never scared.
but look at you..
perched in your comfortable palace
you are so lonely and scared.
Because even the daylight tomorrow
is going to haunt you,
even the soft sunlight will embrace you
and whisper in your ears,
"Rohit is not dead.
He is there, with the millions of us
we are not five.
we never were"